I’m Ready To Dirty Myself With You At Any Day: Disappointed Obiri Boahen Warns On Okay FM 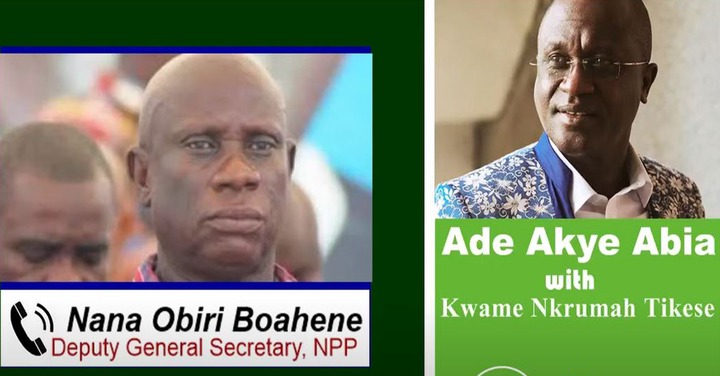 Deputy General Secretary of the ruling New Patriotic Party (NPP), Lawyer Nana Obiri Boahen has sent a word of caution to persons who have been peddling lies about him to stop.

Nana Obiri Baohen expressed disappointment at some news that has been circulating in the media space accusing him of disrespecting the delegates of the NPP and calling for a change in leadership.

According to him, he is ready to dirty himself on every platform with anyone who has the tendency of tarnishing his hard-earned reputation.

According to him, he has a lot of respect for the delegates of the NPP and will never say offensive words against them.

Lawyer Nana Obiri Boahen added that he is now contesting for the National Secretary position of the party and believes some persons have started playing tactical games to pull him down in the media space.

He says persons who want to tell stories about him can do so but must be guarded with facts.

“I’m sending a signal, whoever crosses me will not have it easy. I have a lot of respect for the delegates because they decide who leads the party. I’m ready to face anyone. There was a time someone I had a personal chat with leaked the audio and it was used against me. I have ties with even persons from the National Democratic Congress but that does not mean anyone should record by private conversation and send it to the public to achieve a negative interest. Anyone who wants to write a story about must get every fact right”. He added.

According to him, the NPP is currently in a crucial moment. He says the campaign of the various positions in the party must be run on a clean note without any false publications against any contestant.

“The moment we are in is very crucial and I cannot contain anyone who quotes me wrongly. As for this, I’m ready to dirty myself with anyone who goes on that tangent. We will spare the bible and Quran. We must have a clean campaign. I’m a good politician and have not spoken against any leader not even those in opposition. I will not allow anyone to quote me out of the contest again. I’ve never said NPP should change delegate. We are going for an election and it must be clean. Nobody should record me and twist my speeches to suit the interest of others. After the election, whoever wins we will support them but for now, we must all engage in a clean campaign”. He noted.

3 Reasons Why Marriage Must Be Registered

After Using Him To Win 2 Difficult Elections, You Now Tag Him As Anti Christ.