By Capsiteafrica (self meida writer) | 2 months

Japanese cities are basically what America and a lot of other nations’ cities will be in around 25 years if we don’t do something to stop the rising influence of corporates lobbying and regulating free speech on the internet.

Please note that this doesn’t really apply to the non-urban parts of Japan in which I’m sure many people are really happy with their lives.

What Japanese cities have right now is something that I like to call Corporate Feudalism. Basically, corporations and companies can make you work as long as they want you to, and in return you get depressed.

I know I’m over simplifying it, but that’s kind of the core of what’s happening in Japan right now. 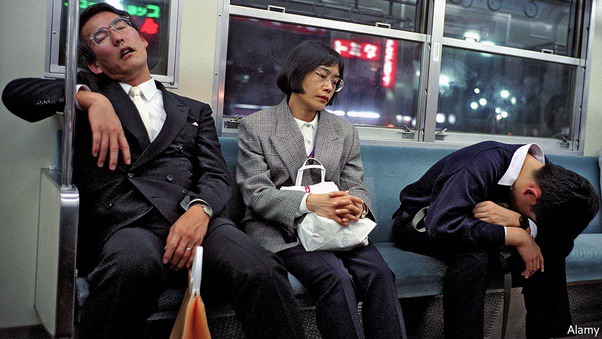 The root of this problem is in the supposed “Asian work culture”. This isn’t just common to Japan, but also countries like South Korea and India as well.

While Japan has technically had a 40 hour work week established since 1947, it is just a fact that most companies do not care at all for it. A government survey in 2016 found that in around 25% of companies, employees were demanded of 80 hours of overtime[1] .

Not asked for, but demanded. Now given that Japanese work culture is basically about loyalty to one’s company[2], think about how this affects the worker if they don’t do it.

Now imagine you’re living a life like this. You’re overworked, and because of that you don’t have a life outside of work either. Work is your life. What might you consider after just 25 years of monotony, or pure nothingness, of just a bleak morbid world?

The Japanese suicide rate is insanely, insanely high, at about 15 people for 100k[3] .

And if you aren’t depressed of your morbid reality enough, there’s still a good chance you’ll die from karoshi, which is literally a legally recognized term for death by overwork.

The Japanese birth rates are declining too as a result of men and women not being fertile enough, again as a result of, you guessed it (!), stress from overwork.

Now introspect for a second. This seems oddly similar to what’s happening in US, except we’re just in a little bit of a shifted stage.

I don’t think it could ever get as bad as what Japan is going through right now, but people are finding it easier and easier to get into a dense corporate layer or overwork in the US as well.

But if our generation doesn’t stop the forthcoming of mass forthcoming of consumerism and its consequences through sheer willpower, I will be very worried for a Japanese-esque America.

Content created and supplied by: Capsiteafrica (via Opera News )

Meet The 52-Year-Old Son Of Nollywood Actor, Pete Edochie Who Is An Engineer (Photos).