The Speaker of Parliament, Alban Bagbin thinks ex-gratia is little as compared to the losses MPs make before they are elected into parliament.

He said this when he was delivering a public lecture today at the University for Professional Studies.

He stated that ex-gratia is not a huge amount of money as we think. He said members of parliament do not benefit from ex-gratia because the money they spend before an MP is elected into parliament is bigger than ex-gratia.

“We are having these problems because there is some perception that ex-gratia is some huge money. You know that as MPs you don’t benefit from that ex-gratia, you don’t, because the money you spent to be elected to Parliament is thrice or four times what they give you as ex-gratia. No MP leaves Parliament better than the MP enters Parliament". He said.

He believes that MPs spend a lot on voters before winning elections and if he/she did not win then they have lost whatever they have invested and are left with nothing. 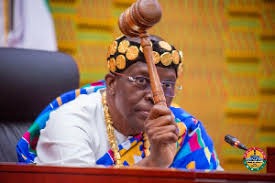 I don't think what the speaker said is appropriate.

What happens if people enter into business and lost all their investment? Do they have to go for ex-gratia as compensation?

So MPs shouldn't distribute their losses to the state and claim ex-gratia.