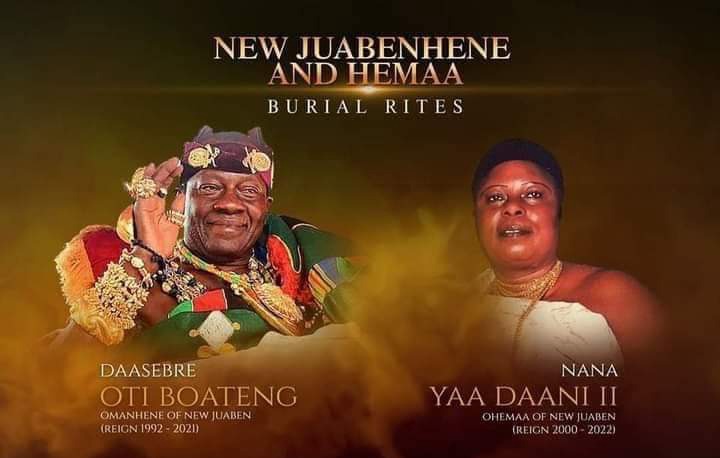 The mortal remains of the late New Juabenhene Daasebre Oti Boateng and New Juabenhemaa Nana Yaa Daani II will be laid to rest today at the New Juaben Royal Cemetery in Koforidua after 30 Years of Reign.

This will be preceded by a traditional burial service (Doteyie) being held at the New Juaben Palace, to climax a three-day elaborate state funeral.

Prior to the traditional Burial Service (Doteyie), funerals, as well as drumming and noise-making in the area, were banned by the Council, in accordance with Asante customs and traditions, until the late Chief and Queen were buried.

The mortal remains of the Late Chief and Queen were laid in state at the Palace from midnight of Saturday 14th May to the forenoon of Monday, May 16, for chiefs, officials, and members of the general public to pay their last respect.

Thousands of people from all walks of life, including traditional, religious, and political fraternities, have since Saturday gathered to mourn with the New Juaben Traditional Council as the prominent Asante Chief and Queen-mother are laid in state.

Traditionally, New Juabenhene (Koforidua) and Old Juabenhene (Asante) are biological brothers from the same mother, as is Nana Juabenhemaa of Asante Juaben.

According to history, the people of New Juaben in the Eastern Region migrated from Asante Juaben in the Ashanti Region in 1832 and 1875 respectively, due to wars that broke out between Juaben state and Kumasi state

Yesterday, the Asantehene Otumfuo Osei Tutu II made a grand entry into new Juaben to commiserate with the people over the passing of their chief, Daasebre Oti Boateng, and Queen-mother, Nana Yaa Daani II.

He was accompanied by a large entourage, which includes Paramount chiefs and divisional chiefs in the Asante kingdom.

Kumawuhene, Barimah Sarfo Tweneboah Kodua will today represent the Asante monarch at the funeral rite of the late Chief and Queen-mother of Juaben Traditional Area.