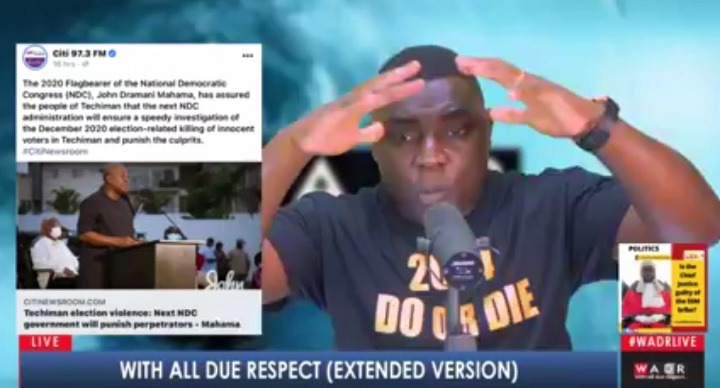 Ghanaian based American investigative Journalist and self acclaimed anti-corruption campaigner, Kelvin Ekow Taylor has made his thoughts known to Ghanaians on the recent promises made by former President and leader of NDC on his nationwide Thank You tour. The self styled broadcaster has poured his concerns about the various promises being made by Mahama.

On the latest extended episode of his televised With All Due Respect Show last night, the firebrand Journalist reacted to the comment made by Mr. Mahama that has attracted the attention of many Ghanaians. According to Kelvin Taylor, Mahama's Do or Die phrase was only a wake up to the NDC members, the government and state institutions like Electoral Commission who have direct role in elections.

Speaking further, he underscored the need for Ghanaians to stop tagging the comment as an inciteful one. The main issue for discussion was the promise made by Mahama to lauch investigations into the killings that took place during the last election. Mahama has also promised to stop corruption that is causing great loss to the nation under Akuffo-Addo government.

Unexpectedly, Kelvin Ekow Taylor Taylor reacting to these mouthwatering breathtaking promises indicated that, Mahama would be disappointed should he fail to fulfil the promises he is making. He boldly indicated that Ghanaians are not ready to defend a non-performing government so Mahama has a duty to ensure that he makes all the promises a reality. He made a call on Ghanaians to take good note of the promises as that will be the basis to measure Mahama's performance if he wins in 2024. 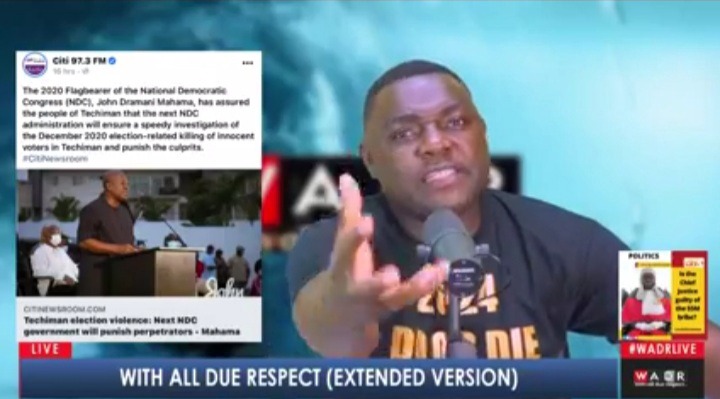 "The kind of words I will use on Mahama if he fails Ghanaians as President again, he will regret ever becoming a President again. Whatever Mahama is saying today, the promises he is giving and the assurances he is giving Ghanaians, if he refuses to do them he will not enjoy being a President. He should not dare to disappoint Ghanaians else this same show will be used to attack him wildly."

"We are taking his words as he is boldly stating them. He should make an effort to fulfil everything he is promising else he will not enjoy his Presidency for a month. We are believing what he is saying because he has done some before. That is why people like us who are rational and analyse issues have seen that he has the experience in terms of stopping corruption. He is trusted to be the one to come and stop this canker, but if he comes in and disappoints, he will understand how strong and discerning Ghanaians are. We are not going to mince words again. If you know you cannot as you're preaching just step away from our politics."

What do you say about Kelvin Taylor's comments? Share your thoughts with us by commenting below.