Burkina Faso coup: shootings in the capital and closed highways

By Jeraivans (self media writer) | 3 months ago

The man who was overthrown in a coup in Burkina Faso, according to the self-proclaimed leader, is preparing a counterattack.

Lt Col Paul-Henri Damiba was allegedly kept at one of the French army's facilities, according to Col Ibrahim Traoré; however, France denies any participation.

On Saturday, gunfire was audible in Ouagadougou, the capital of Burkina Faso, and helicopters were circling overhead.

Outside the French embassy, protesters lit a fire, which Paris "with the utmost force" denounced.

The security of its citizens was the top priority, the French foreign ministry said, adding that a crisis center had been established in Ouagadougou.

Prior to that, witnesses claimed that military had blocked the city's main thoroughfares, and stores that had been open had since closed.

The country's army appears to have taken control once again on Friday; the announcement was made on national television.

On both occasions, the coup leaders claimed that the situation with national security required their intervention.

Experts estimate that only 60% of Burkina Faso is under government control, and Islamist violence is getting worse.

Due to the conflict, more than a million people have been displaced within the nation since 2020.

The African Union, which agrees with the regional organization Ecowas that the removal of leader Lt Col Damiba was "unconstitutional," has demanded the restoration of constitutional order by July 2023 at the latest.

Earlier, Ecowas stated that it was "wrong" for army rebels to take control of the nation as it worked toward civilian authority.

The UN, led by António Guterres, has issued the most recent international censure, stating that he "strongly condemns" the coup.

The coup leaders have released a statement on national TV for the second time in less than twenty-four hours, signed by their leader Col. Ibrahim Traoré.

For the first time, they asserted that Lt. Damiba was preparing a counterattack because they were open to collaborating with new allies in their struggle against the Islamists.

Although both countries deny this, rights groups claim that forces in neighboring Mali have been closely collaborating with Russian mercenaries from the Wagner group. The statement did not name these potential new allies.

An officer had made a statement on national television on Friday night that stated they were forcing Lt. Damiba out of office, dissolving the government, and suspending the constitution, flanked by rebel soldiers wearing fatigues and black facemasks.

Col. Traoré, an army captain, also spoke on behalf of that statement, claiming that Lt. Col. Damiba's failure to handle an Islamist insurgency was to blame. 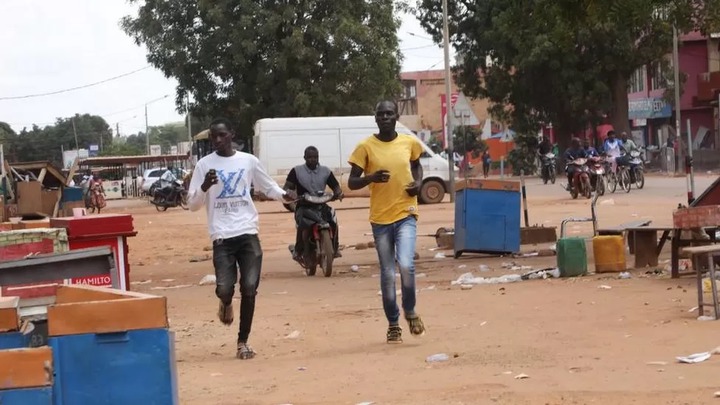 He declared, "Our people have endured enough and still suffer."

Col. Traoré, a 34-year-old soldier who commanded Cobra, an anti-jihadist unit in the north, is not well known.

He effectively appointed himself as Burkina Faso's interim president in his statement.

However, the announcement on Friday included a pledge that eventually, the "driving forces of the nation" would come together to choose a new civilian or military president and a new "transitional charter."

Content created and supplied by: Jeraivans (via Opera News )