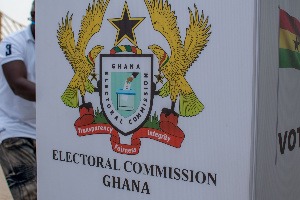 An individual from the Constitutional, Legal and Parliamentary Affairs Committee in Parliament, Rockson-Nelson Este Kwami Dafeamekpor, has depicted the failure of the individuals in the Guan District of the Oti Region to cast a ballot in the 2020 races as "variation".

The Member of Parliament for South Dayi Constituency said "the EC has regarded the individuals as though they are sub-residents of this nation" in light of the fact that the EC kept them from casting a ballot at last of December 7.

The Guan District is comprised of Lolobi, Akpafu, Santrokofi and Likpe regions. These regions were important for the Hohoe Municipality until the submission that made the Oti Region.

They casted a ballot in the submission and are currently important for the Oti Region.

During the citizen enrollment, the region was not made at this point, so they enlisted under the Jasikan District in the Buem Constituency.

Afterward, the Guan District was made.

By this, occupants couldn't cast a ballot in the Buem parliamentary decisions since it was impractical for a supporters, Buem, to have two regions – Jasikan and Guan.

Responding to the issue on Onua TV's 100 Degrees facilitated by Kwame Tutu on Monday, Rockson-Nelson Dafeamekpor said the EC isn't being honest.

He added, "It was a purposeful endeavor to forestall individuals of Lolobi from casting a ballot on the grounds that the assertion was given at night of Sunday… the day preceding the decisions".

The National Democratic Congress (NDC) MP said "it's a deviation and it needs to go to court. It's so unpardonable".

Attorney Rockson-Nelson Dafeamekpor said the EC ignored a decision on the Guan District in light of the fact that even the creation says it should produce results in the eighth Parliament… that is the 2021 Parliament "however their votes were not included in the official appointment of the December races".