Facts suggest that the E-block project in Aflao in the Volta Region is currently 96 per cent complete New Patriotic Party administration up from the 23 per cent inherited from the former president John Dramani Mahama National Democratic Congress administration, According to the Member of Parliament for Mpraeso, Davis Opoku Ansah. 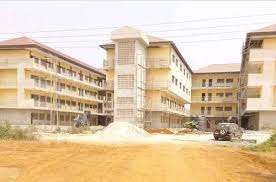 This, according to him, is an indication that President and leader if the New Patriotic Party Nana Addo Dankwa Akuffo is concerned and appreciates that it is his soul obligation to make sure that the project is completed.

Mr Ansah has therefore, tasked individuals giving literal explanations to the President’s reply to the Paramount Chief of Aflao, Torgbui Adzonugaga Amenya Fiti, following the traditional ruler’s call for the completion of the project, to stop.

According to the Member of Parliament, reading literal meaning into the President’s response will be absurd to the two parties.

Speaking on the Key Points on TV3/3FM on Saturday October 23 with host Dzifa Bampoh, Honourable Ansah said “ Torgbui Fiti and the President Nana Addo Dankwa Akuffo I am told are pals. Just recently in 2019 when the President visited Aflao , this is the Chief that sent words of encouragement to the president for turning around the economy of the country , an economy that he met that was in it's deplorable state, the president has turned it around. 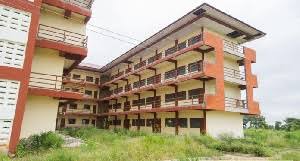 In the picture is the said e - block which is pleading for completion.

So it tells you that these are persons who have some level of cordial relationship. If you are to give a literal explanation of what the president said, yes that will be the conclusion.

“So, jokingly saying that the Chief Torgbui Fiti should complete the project for me, I think the president came form the point to say that the dead line from his good friend Torgbui Fiti to his education minister is somewhat putting a lot of pressure on him as president.

“The president Nana Addo Dankwa Akuffo welcome the fact that it is his soul responsibility to complete that project , it is not the responsibility of the chief to do that . That is why the Ministry is making sure that the project reach a hundred per cent completion before the end of the President second term.

“So let us not give a literal meaning to what the president said to the Aflao chief. If you do that you are not being fair to the president, you are not being fair to the chief . I am very much content that the Togbui Fiti spoke about this things, the president has given has passed a comment on it , I think it will lead to a lot of improvement and development for the people of Aflao, I am sure in the coming days there will be a lot of attention on the E-blocks so that just as the chief said his people can enjoy the free Senior High School.”

According to the Member of Parliament for Buem, Honourable Kofi Adams has pleaded with President Akufo-Addo to apologise to the Paramount Chief of Aflao Torgbui Fiti following his response to him.

Honourable Adams said the President was wrong in his response to the call for the completion of the e block made by Torgbui Fiti of Aflao.

Minority members of the eighth parliament on the Education Committee of are visiting uncompleted projects in the country. They visited was in Aflao in the Volta region.

Over there they met the Paramount Chief Torgbui Adzonugaga Amenya Fiti, who then raised issues against the failure to finish the project and further gave the education ministry a four-month deadline to open the e-block community day senior high school which in his opinion, has not been touched since 2016 following change of government.

The project which amount to Nine million Ghana cedis ( GH¢ 9 million ) was part of some 200 classroom blocks the erstwhile John Dramani Mahama and the National Democratic Congress administration started was supposed to have some 26 classrooms attached and 5 departments including a science block.