By Daily_Updates2 (self media writer) | 1 year ago

Managing Editor of the Insight newspaper, Kwesi Pratt Jnr, has waded into the reactions concerning the resignation of the Member of Parliament for the Tema West constituency, Mr Carlos Ankorah. He applauded the minister for his honesty. 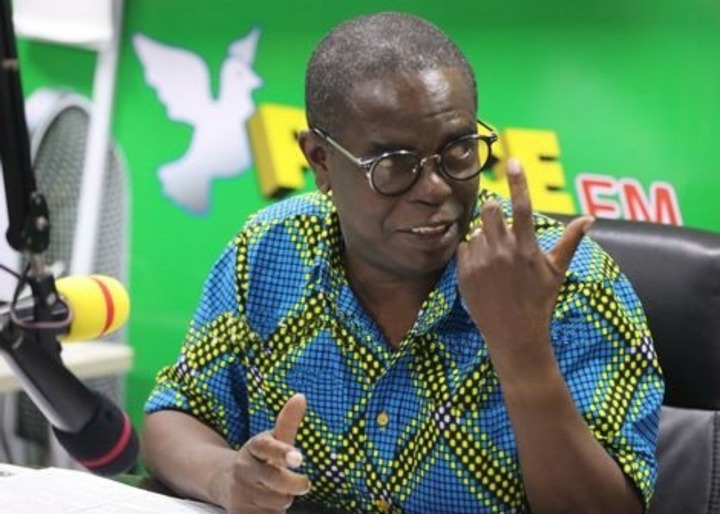 The resignation of the Member of Parliament for the Tema West from office as the Deputy Trade Minister has being the news in the headlines. Many people are condemning this act by the legislator. The General Secretary of the opposition NDC,Honourable Johnson Asiedu Nketia and Occupy Ghana have all called for the legislator to be be prosecuted for flouting the COVID-19 protocols.

However, according to Kwesi Pratt Jnr, the fact that the legislator did not hide the truth but has openly disclosed that he had COVID-19 portrays a high sense of honesty.

Kwesi Pratt Jnr speaking during an interview on PeaceFM’s morning show dubbed ‘Kokrokoo’ indicated that, Carlos Ahenkorah has defied the odds to prove that some leaders still speak the truth.

This, according to him, is very rare because most leaders go the extra mile to deny their wrong deeds even when caught red-handed.

Monitored by TopNews Ghana he said that, “Carlos did not act well. But even in such circumstances, he spoke the truth. That is something we should learn from. When leaders are even caught red-handed, they move heaven and earth to deny it. He has proven to us that some leaders still speak the truth which is very rare among leaders. When they are being recorded on tape, they tell you the tape is doctored,” he stated.

According to him, the fact that the Tema West MP wasn’t scared to admit that he has tested positive for COVID-19 regardless of the circumstances he found himself, is worth the praise.

Earlier today, the President of the Republic, Nana Addo Danquah Akuffo accepted the resignation letter from the Deputy Minster of Trade who is also the Member of Parliament for the Tema West constituency, Mr Carlos Ahenkorah. This statement was released after the legislator admitted that he flouted the COVID-19 safety protocols that have been put in place to stem the spread of the virus from the country.

After the news broke about the death of the former General Secretary of the NPP, Sir John, reports indicated that, Mr Carlos Ahenkorah was allegedly admitted at the Intensive Care Unit (ICU) of the Korle Bu Teaching Hospital on the Greater Accra Region after testing positive for the coronavirus.

However, the Minster in response denied the allegations and disclosed that although he had tested positive to the virus but wasn't admitted at the ICU.

Speaking further in response to these allegations, the Minister revealed that he toured of the registration centres even though he had tested positive for the disease. This information caused an uproar on both the social and traditional media. Several Ghanaians condemned the Minister's action and called for immediate action to be taken against him. 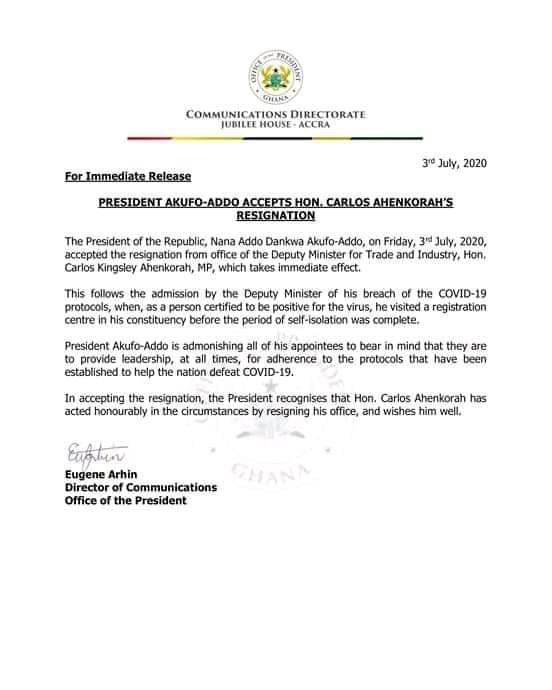 This, the president gave him an ultimatum to either resign or get fired. Reports earlier indicates that, the legislator has resigned from office as the Deputy Trade Minister.

The Editor of the Insight Newspaper speaking on the resignation of the legislator applauded the legislator for speaking the truth and proving that, there still exists leaders who do not fail to speak the truth.

Content created and supplied by: Daily_Updates2 (via Opera News )