By Accraisback (self meida writer) | 1 months

I can't just imagine MP Sam George telling the UK's House of Commons what laws to pass in their backyard, but it is unfortunate that what I can't imagine, is happening in my country where a former high-ranking British official claimed he knows better we do in a loud outburst of anger on Twitter. 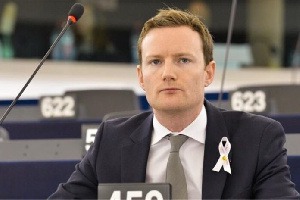 Seb Dance, a known prominent pro-gay lobbyist, waging a commentary on our domestic affairs is not a behavior of a partner whose country is partly responsible for enslaving millions of Ghanaians more than 400 years ago.

The Foreign Ministry Officials in Ghana must immediately summon the British High Commissioner in Ghana for an explanation on why their former MP made statement presumes to be an interference in our domestic affairs.

We deserve to know what gave the former British official the audacity to forcefully comment on our domestic internal politics.

He must explain his motivation for why his views should be an authority on the subject given that in the latest Press Freedom Ranking our country has done better than them.

The world is fast developing into multipolar dimensions comments like the one made by Seb Dance against an MP of a better free world left much to be desired whether the former British official is aware of the changing world or he is living in denial.

Seb Dance must be dragged to appear before the privileges committee to answers for his mischievous commentary against an MP of a free country, who is only doing the will of the people who put him there.

Such escalation would serve as a deterrent against any future western officials for commenting on our internal political discourse for further interference in the future.