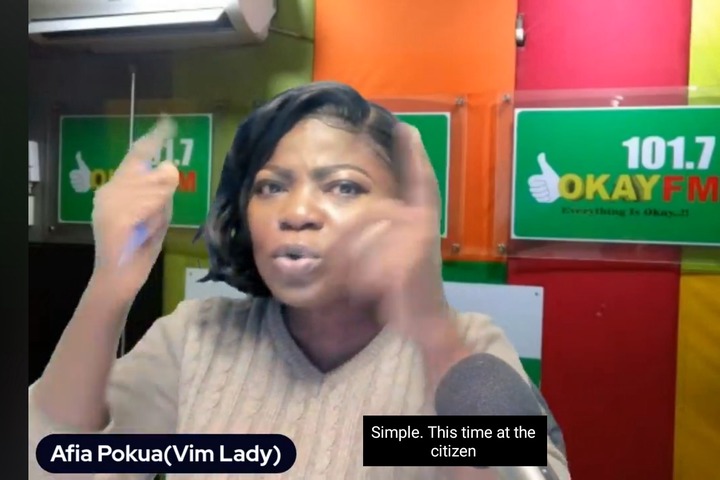 Outspoken broadcast journalist, Afia Pokua alias Vim Lady had lashed at critics who continuously attack her for being objective on matters of governance and development in the country. The fearless young woman said none of these attacks would ever make any difference nor silence her in her criticism against the government and its appointees.

On Egwaso Gwaso show Vim Lady remarked that it is absurd of government officials and party folks of the ruling New Patriotic Party (NPP) to run into her social media handles to insult her person for critiquing issues. She corrected that her work is not an office of the government and neither is she a spokesperson of the government to defend it on political and developmental affairs.

She exclaimed that her conscience is as clear and objective on every matter, adding that it would be appropriate of her critics especially those affiliated to the ruling party to expend their precious data and time to understudy and inform their leadership on what ought to be done right.

“Don’t join the bandwagon and rant on social media. Use your data to hold them to account.”

She intimated that no one could dictate to her what and not what to comment on, adding that she is none of the staffers of the government nor a communications personnel of any government agency to owe any of them an obligation to be defending the government.

“Do you see my name in the list of people appointed into the office of the President? I am not on the government payroll,” she fumed.

Vim Lady stressed that it’s about time Ghanaians get enlightened and more proactive in demanding accountability from the government. She indicated that Members of Parliament are not far from being rebuked when they fail to develop the constituencies they represent.

She remarked that “some are asleep, and must be shamed for it but for those doing excellently well as Asenso Boakye they must be praised.” Vim Lady emphasized that she would not hesitate to speak against the re-election of some MPs in NPP who despite the years of being in government had failed to develop their areas.