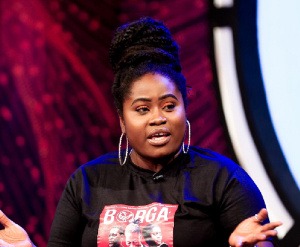 Actress Lydia Forson says the ruling New Patriotic Party (NPP) has shown very little of the competence they promised the people of Ghana while in political wilderness in 2016.

She says the NPP, while in opposition, set high standards for themselves, holding the erstwhile Mahama administration to strict account and criticized him squarely only to come and perform below expectations.

“The NPP led by @NAkufoAddo set themselves up to be the standard; they didn’t hold back in the criticism of Mahama.

“If they could they would have scrutinized how he chewed his food. But today, they’ve done absolutely NOTHING to show this integrity they sang about- none”’, he stated.

Ms Forson’s tweet was in response to a post shared by Gabby Otchere Darko to the effect that the current economic situation in the country is not peculiar to Ghana alone as the entire world is facing the same or worse crisis.

In the said tweet Mr Otchere Darko, tried to urge the people of Ghana to remain optimistic and continue to believe in the leadership of the NPP government to bring Ghana out of the current crisis.

“Yes, indeed, Ghana is in crisis. Most countries are in crisis now though levels differ. What matters most is how we come out of it. And

“I remain an incurably stubborn optimist (based on knowledge) that Nana Akufo-Addo and his team will lead us to come out of this even stronger”, he tweeted.

But Ms Forson says Ghana’s current challenges have very little to do with the global economic crisis as has been widely pointed out by assignees of the ruling party.

But rather, she says, Ghana’s crisis was self-inflicted due to mismanagement and refusal of President Akuffo-Addo to heed to sound advice from people outside his government.

“I’m more than willing to forgive the mistakes of our leaders, and hold on to the hope that we can bring our economy back to life.

“But I can’t believe in leaders whose pride will not let them accept/admit where they’ve failed. And that’s the major problem with African leaders”, she added.

She further chided the current leadership for constantly shifting blame and refusing to accept responsibility for the challenges facing the Ghanaian economy.

She says the biggest problem with Ghana is the pride and ego of its leadership who continue to shift blame for the woes of the country on everything else but themselves.

While her comment is targeted at the ruling New Patriotic Party (NPP), she however says the issue of blame games did not start with them and may also not end with their exit.

“The biggest problem with African leadership in particular is pride and ego. It’s why very very very few people know how to admit they’ve failed and step down.

“This isn’t new, it’s before this government and will continue well after until someone stops it”, she stated.