N/R: Turmoil in NPP as Executives are Suspended Over Failure to Endorse Bawumia's Presidential Bid

By Kumbundoo (self meida writer) | 27 days 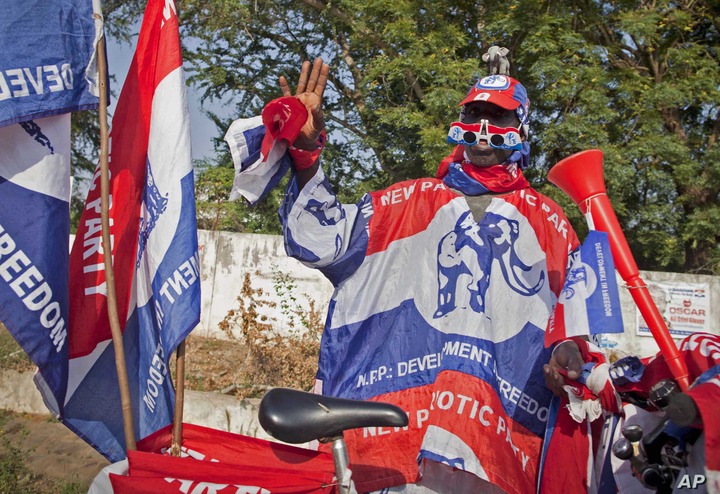 Three polling station executives of the ruling New Patriotic Party in the Savelugu Constituency of the Northern Region have been suspended for gross misconduct following a media engagement this week where they accused and condemned regional leadership of the party for what they said was attempts to impose the presidential bid of Vice President Mahamud Bawumia on them. The three executives are Issahaku Fuseini of Duko D/A polling station, Abdul Karim Zakaria of Kuga Fong No.1 and Deishini Abdallah Mustapha of Newton Mosque A. polling station. In separate letters addressed to the affected leaders, Alhaji Mahamadu Abdulai Kpong, constituency chairman of the party said their suspensions were indefinite and take immediate effect until an inquiry is conducted into their behaviours by the Disciplinary Committee. 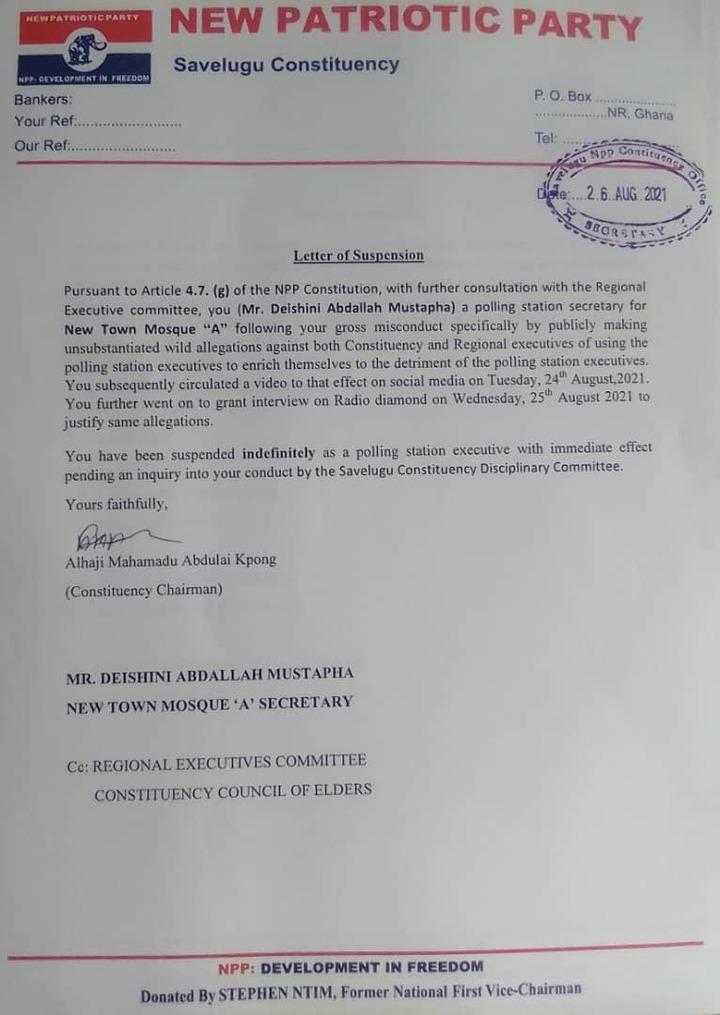 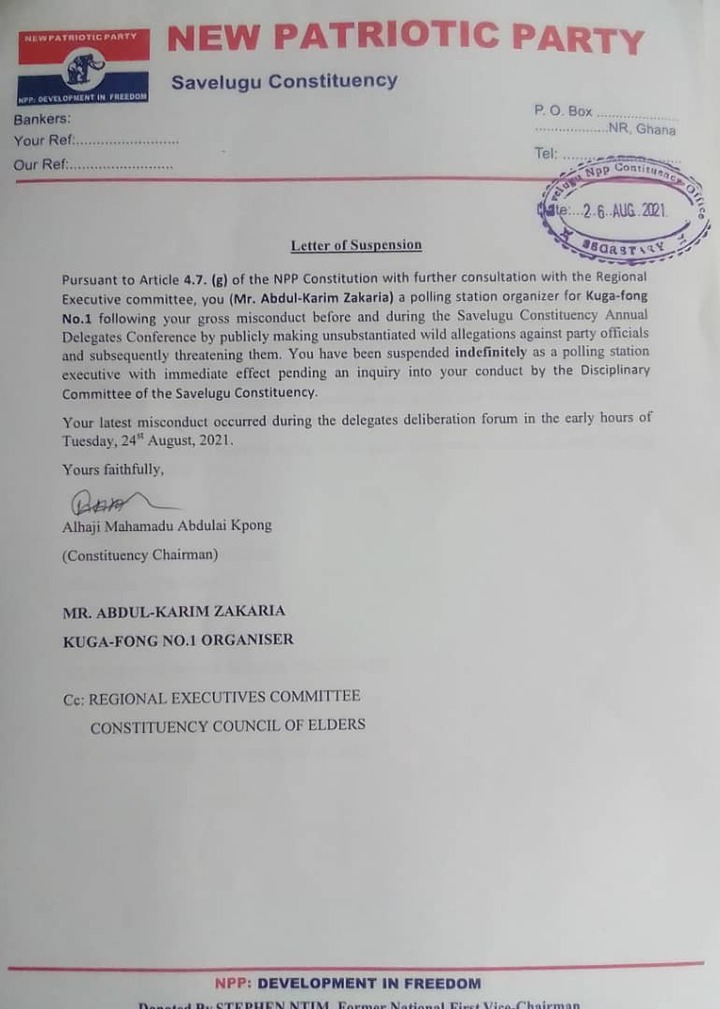 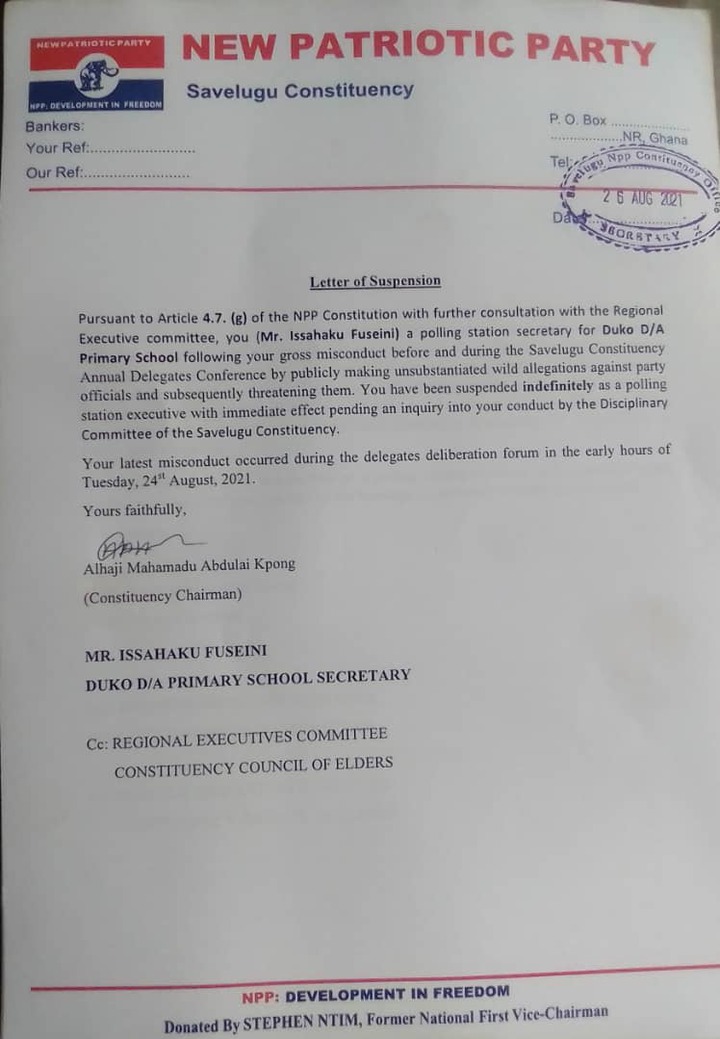 Shortly after the constituency annual delegate conference held in Savelugu on Tuesday [August 24], the affected executives engaged the media who covered the program and made some allegations against the constituency and regional party executives. They accused the leadership of neglecting the grassroot base of the party but at the height of their accusations was their revelation that there had been attempts during the conference to coerce participants into declaring support for the 2024 presidential ambitions of the Vice President. The governing party has since denied the allegations, describing the submissions of the disgruntled executives as outright falsehood and that at no point during the conference were attempts made to force people to endorse the presidential bid of any candidate.

A statement signed by the constituency chairman said the spreading of falsehood brings the name of the party into disrepute and that contravenes Article 4.7.(g) of the governing party's constitution, hence the decision to disengage the three polling station leaders from their roles pending inquiries into their conducts.

Embarrassing scene as Government officials go looking for Twene Jonas on the streets of New York.

Twene Jonas Is Minding His Business: See The Message He Sends Across After Buying Iphone 13 Pro Max

Don't compare yourself to Lilwin, says Salinko to Dr. Likee.