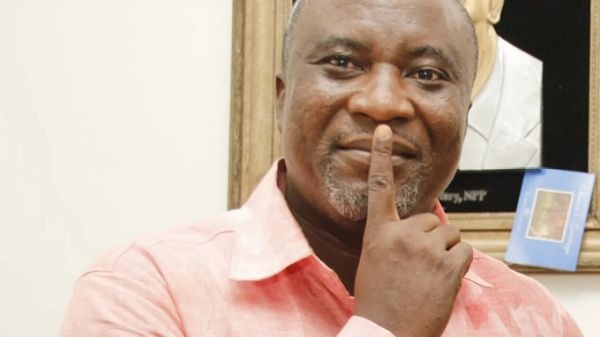 Hopeson Adorye, former Parliamentary Candidate for Kpone-Katamanso Constituency, has apologized for comments he made over the weekend during a health walk dubbed "Aduru woso."

According to the New Patriotic Party member, the comments he made were not intended to cause confusion among party members or the general public, hence the decision to retract them.

Upon reflection, he wrote on his Facebook page, "I realize that my statement may have been misunderstood and offended some patriots, or deliberately turned around by political opponents for their misguided intentions."

"It was not in my nature, and it was certainly not my intention" to cause this misunderstanding. "I accept full responsibility for my actions and sincerely apologize to everyone who has been offended," he continued.

Mr. Hopeson Adorye also denied being the Minister of Trade and Industries' Operations Director, saying, "I take this opportunity to state categorically that I am neither an Operations Director for Alan Kyerematen nor aware of any such campaign team created."

Asanteman has spoken. "Alan Kyerematen is the NPP's unifier and the best choice for victory in 2024, and I am at peace with it." Asanteman said

While explaining to followers why they should support the Minister of Trade as the next flagbearer of the New Patriotic Party (NPP), Mr. Adorye mentioned that the party has changed leadership based on its traditions.

Albert Adu Boahen, who represented Danquah, ran against Dombo in 1992. We had the Great Alliance in 1996, but in 2000 it came down to Kufour, a Busia who ran with a Dombo. Following Kufour, it relocated to Danquah with President Akufo-Addo. He ran in the election alongside another Dombo, Vice President Mahamudu Bawumia.

"If it went to Danquah, then to Busia, then back to Danquah, where should it go now?" Hopeson Adorye inquired.

However, there have been some social media reactions to the development since.