By Cecilmenz (self media writer) | 11 months ago

The main opposition National Democratic Congress’s Member of Parliament -elect for Tamale Central Constituency in the Northern Region has strongly indicated that the NDC as a party is not surprise the Electoral Commission boss, Jean Mensah is behaving as such after declaring fraudulent election results during the December 7, polls.

According to him, all the EC boss is doing in the matter of declaration of fraudulent election results is a hatchet plan of the governing New Patriotic Party (NPP) led by President Nana Addo Dankwa Akufo-Addo.

He said every fact in relation to the results declared by the EC boss in the December 7, points to the EC boss reading from a script written for her by the NPP. 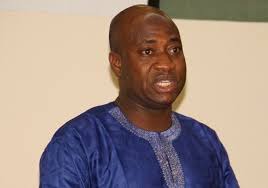 The EC boss is just delivering a script prepared for her by the NPP and nothing more because the EC boss is oblivious of many of the rules governing elections in the country, he explained.

‘The EC boss is ignorant of the rules governing elections in the country adding that this has accounted for the numerous mistakes, she has committed in the declaration of the presidential and parliamentary election results.

According to him, the EC boss has no mind of her own in the management of the electoral affairs of the country,

This is a woman together with her husband, Mr Charles Mensah set up the Institute of Economic Affairs(IEA), a governance think tank, which has over the years been in the bosom of the NPP, he stressed.

The woman’s behaviour points to the fact that she is being remote-controlled by the NPP and that all she is doing is on a slate prepared by the NPP to steal the mandate of the people of Ghana, he posited.

I do not believe this is the woman’s own mind in operation adding that all that is ongoing was prepared by some long hands in the NPP government.

The woman’s election declaration is fraught with common arithmetic mistakes, yet she does not want to her mistakes corrected, the former Deputy Minister of Trade and Industry in the NDC's government led by former President John Dramani Mahama added.