As a Christian, would you shoot an armed robber if you accidentally got his gun? Netizens react

By the_Kelvin_guy (self meida writer) | 26 days

In my quest to eradicate the boredom which was suffocating me yesterday, I decided to stroll online to find out if I would get any interesting news to alleviate the solitude I had been cornered into. I have always been a lucky guy, I must say because my adventure led me right into an interesting topic on the social media and I think it is worth sharing.

A simple question asked ended up splitting many people apart. I thought it would be nice translating the joy which came with it over here so you could share your honest opinions.

It is a beautiful Sunday morning and I am sure most of the Christians went to church and therefore their judgement on this issue is going to be an honest one. I don't expect a person to go to church and come out with lies right after closing. It wouldn't make any form of logic.

This article is a very interesting one and I know you will love it at the end.

A Twitter user known as "Nappy Blaze" decided to ask this question on his page and well, he managed to get many engagements. 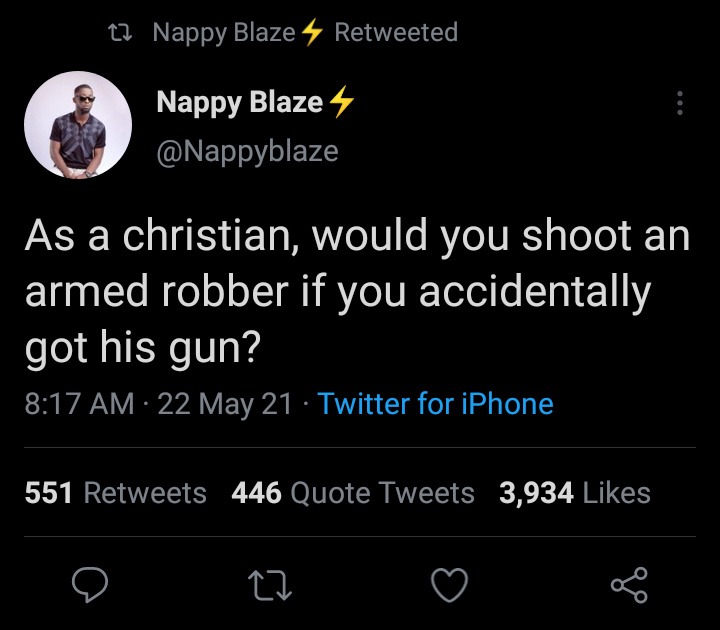 Now, I am asking you the same question, As a true Christian, imagine armed robbers come to your house and during the operation, they mistakenly drop their gun. Be honest with us all, when you get hold of that gun are you going to shoot them or just hand it back over to them?

Are you going to consider the fact that you are a Christian and therefore murdering a person should never be in your dictionary or just go right ahead to murder him so as to protect your family? 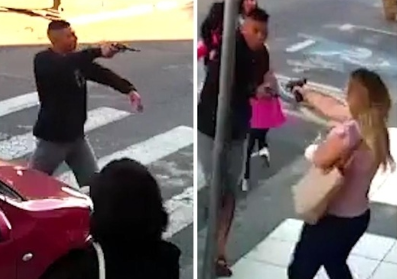 This question is a simple one but when it comes to taking such a decision many people tend to think about it. For me, I think giving it a thought should not even be an option at that particular moment. Why should I not shoot an armed robber who only came to kill me as well as harm my family?

Ladies and gentlemen, for me if an armed robber comes to my house and mistakenly drops his gun, you are going to hear the sound of the trigger being pulled. He came to kill me so why then do I have to spare him when I get hold of his gun?

I wouldn't shoot him with an intention of killing him. I would probably shoot his legs so he cannot run anymore and then call the police but I am not an expert when it comes to shooting and therefore might kill him in the process but what do I do? I don't care.

After asking this question many people came in with their submissions. I went through a few of them and took screenshots. Take a look at some of them below;

1. Looking at the first comment, there's no doubt he's a funny guy. This tweep claims it is is duty as a Christian to send people to Heaven meaning he would have killed the robber. The question over here is simple, what are the chances of a robber going to Heaven if killed in the act?

Looking at the last comment, he is also going to send the robber to the grave no matter what. 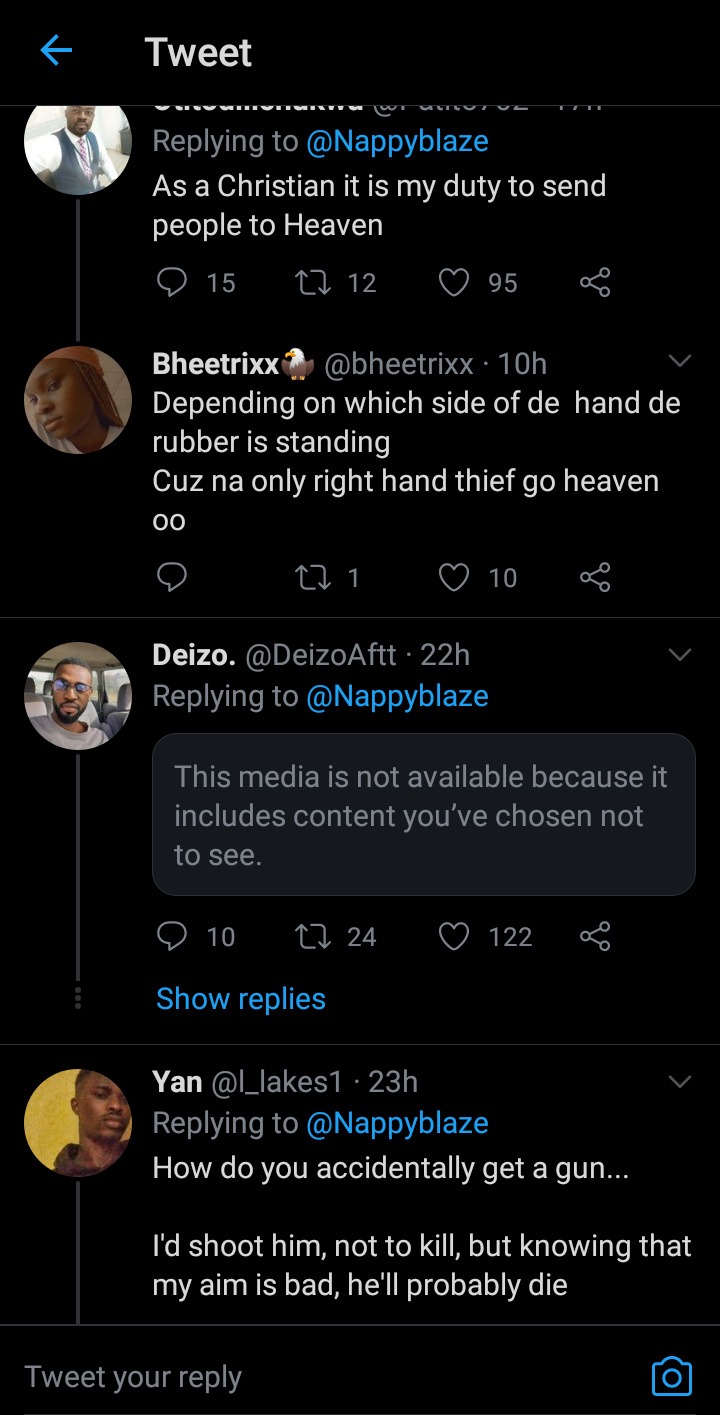 2. Peter claims after shooting him, he will feel bad but Alabi came in with a hilarious reply right after Peter's comment. He claims after pulling the trigger, he will listen to a Christian worship song. I wonder if the song will clean the blood stains on his hands.

The last comment says it all. Religion has nothing to do with our safety. At certain times, you put religion aside and follow your instincts. 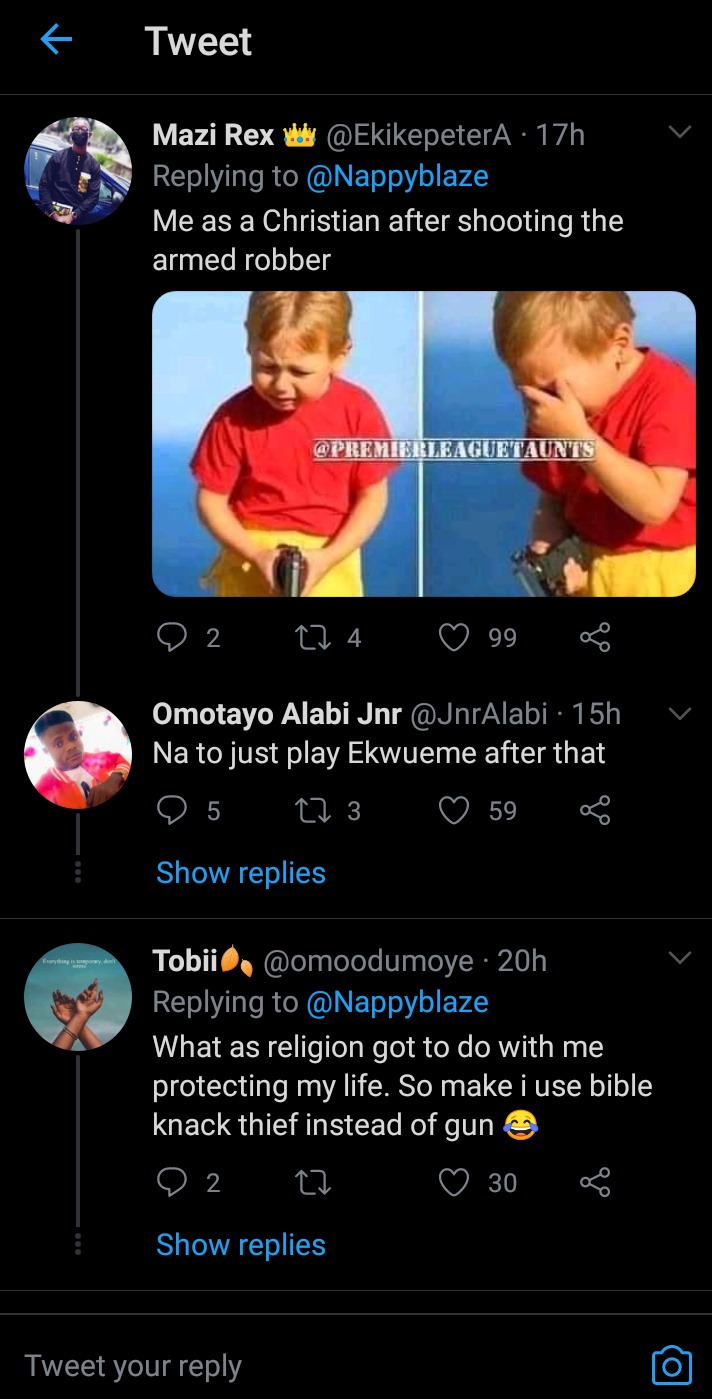 3. Dan is certainly going to pull the trigger a number of times knowing that he's going to be the victim if the armed robber gets hold of the gun again. He claims is bullet was going to fly through the heart of the victim for which a wicked comment landed. He was to go for the head instead. 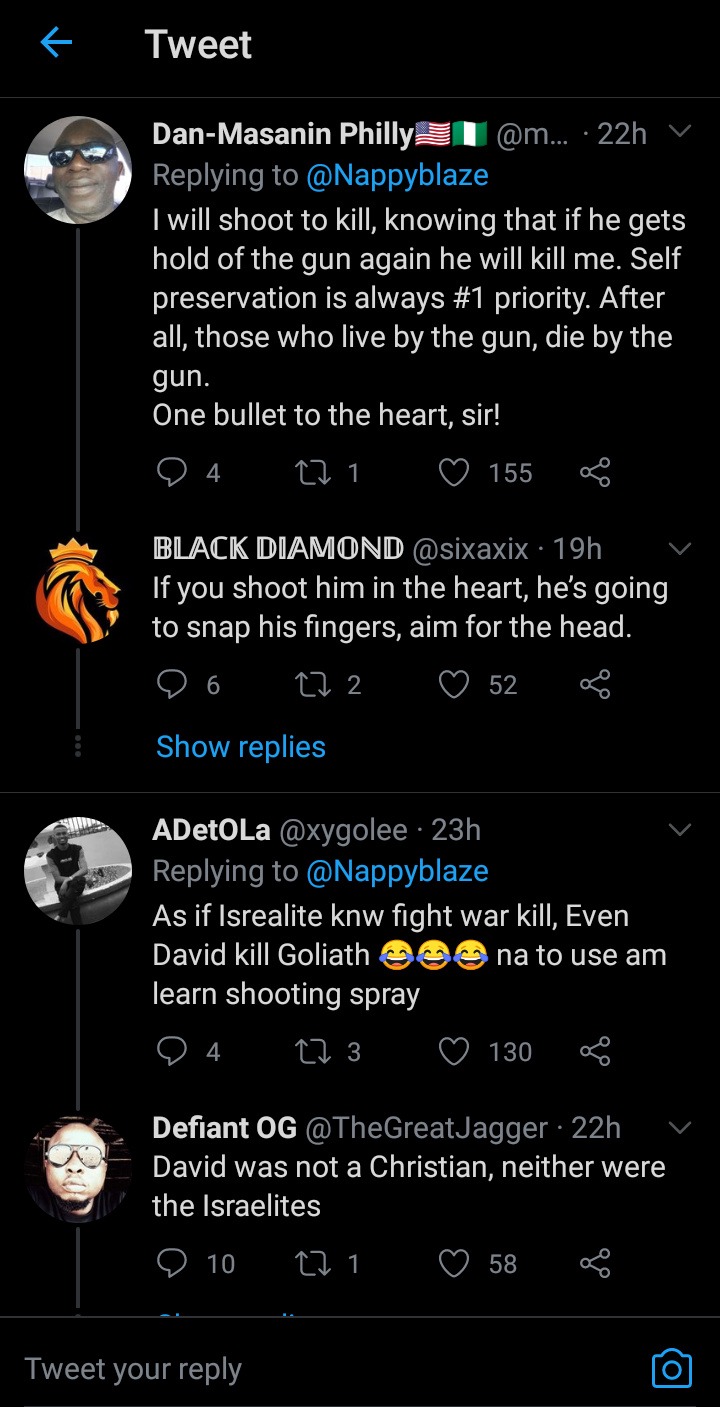 Now, over to you. Please be honest, what will you do if you face this kind of situation?