Nobody Will Go To Heaven When They Die, Heaven Is For Angels Only - Ajagurajah.

Dear reader NOTE that, this was a Live interview Last night 26th May and that is his opinion. 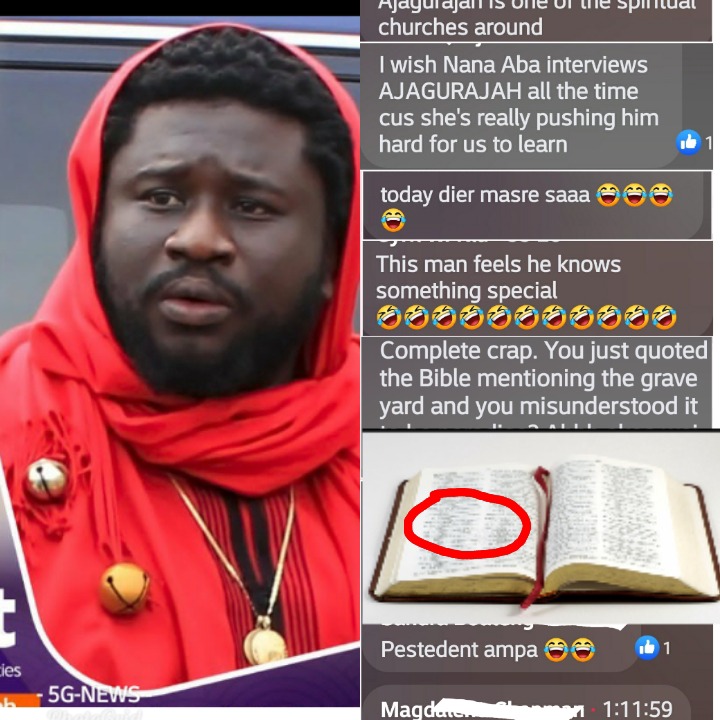 Prophet Kwabena Boakye Asimah, popularly known as Ajagurajah is the President of Universal Spiritual. In an interview with Nana Aba Anamoah on Starr Fm 103.5 He said that, his name is not Ajagurajah as people use to call him. Ajagurajah is the name of the spirit behind his church which his late father was the overseer. Although he doesn't like what he is doing but among Fifty Three (53) children of his father, he is the only one who inherited the Spirit from the father.

Adding that, the spirit told him Black and Red is the color for God. And only that color is allowed in the church service any different colors will not be allow into the church, whether it being member or stranger. [Priestly Garments - Exodos 28:31]

Moreover, he said that their members are about, One Thousand, Three Hundred and Eight (1308). They start Church service at 1pm in the afternoon to 8pm in the evening and that is why he has to cook for his members. Besides, he is leaving in a remote area where members can't get food to buy.

When Nana Aba asked him 'Christians and Muslims believe Heaven as their reward when they die, what do you and your members also believe in?'

He said nobody is going to heaven when they die, thus, heaven is for only Angels, believers would go to paradise when they die. [Ecclesiastes 9:9-10]

Concerning his opinions on Tithe, he said he believes in tithes though but some churches had gone faraway from the ordinance. "It's supposed to be Food Stuff like: Yams, Cassava, cow, goat, bla bla... But no!! They only accept Money and Cars which is against God wills". Ajagurajah said.