By Hajia_Maryam (self meida writer) | 6 days 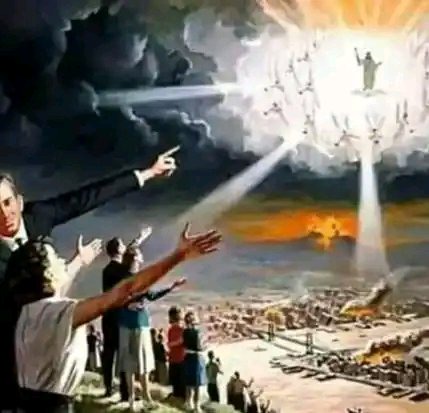 Since the day Christ said he'd return, Christians have been looking forward to the second coming of Jesus and wondering when it would happen. Countless sermons about the end of the world have been made and many churches are always talking about his return. If a person types the name of a contentious leader in Google, it's "Anti-Christ" that will be one of the most likely suggested searches.

Here are the 7 prophecies that have been fulfilled about the coming of Christ:

1. The Gospel will be preached to the whole world

Christ will not return until after the Gospel has been preached to the whole world. Many people see this prophecy as almost fulfilled, but it is possible that it has already been fulfilled. When the Bible was written, the phrase "the world" meant something different from what it does today.

When people speak of the whole world today, they refer to the globe as a whole and interpret this prophecy to mean that the gospel is to be preached in all countries of the earth.

During the time the prophecy was first written, however, “the world” was used to refer not to every inch of land on Earth, but to the extent of the Roman Empire.

2. A Jewish homeland will be established in Israel

Before Christ's return, the Jews will be truly settled in their ancestral homeland and Jerusalem will again be in the hands of the Jews. Many believe that this sign will come soon because Israel is currently a Jewish country but Jerusalem, however remains divided among various groups.

3. Natural disasters will be generalized

The end of time is going to be disastrous. There is a reason the words "apocalypse" and "Armageddon" are associated with catastrophic destruction. During the end of time, God will turn nature against humanity.

There will be pandemics, floods, fires, earthquakes, famines and what many researchers identify as meteor strikes or even a comet colliding with Earth. These many disasters will happen all over the world and kill billions of people.

4. Global communications will exist before the last two witnesses

One of the best known accounts of the end times is that God will send two final witnesses to preach the gospel. The two witnesses will be killed and their bodies will be seen by everyone in the world.

For this to happen, the whole world must be interconnected and be able to communicate with each other very quickly. Again, the conditions required for this prophecy to be fulfilled are almost complete.

With the rise of the internet, social media and smartphones, it is easier than ever for people to pass information to each other. Events that occur on one side of the world can be broadcast to the other in milliseconds.

The world is also becoming increasingly hostile to Christianity. Things haven't spilled over yet, but it's easy to believe that the time of the two witnesses is fast approaching.

5. A charismatic and convincing false prophet will appear

No sign of the end of time has captured the world's imagination as much as the anti-Christ. This figure will be as charismatic as it is devilish and will lead millions of people astray. They will cause the deaths of hundreds of thousands of people and turn countless people against God before Christ returns to Earth.

6. War and violence will rage

Not all the disasters that accompany the end of the age will be caused by nature. Many of them will be things that humanity will bring on its own. War and all kinds of violence will rage before Christ returns to Earth. Both men and women will attack and kill their enemies, friends and even their own families. Even if natural disasters devastate cities, people will continue to inflict violence on each other.

7. God's people will be driven out and killed

Unbelievers will cast out and kill God's people before Christ returns. Those who dare to cling to their faith cannot trade with others because they will be hunted and killed.

In view of the growing rate of murderous persecution of Christians in the Middle East, Asia and Africa, and of Christian ostracism and hate in the West, it may not be as far as some believe that faith once again is a matter of life or death for Christians.

Christians have always sought signs of Christ coming soon. Paul urged Christians in the first century to be vigilant and prepare for the return of Christ. Countless blogs and websites in the 21st century are dedicated to this amazing event.

No matter what Christians looked out for, the fact remains that the day before everybody waits to see when the last signs come to fruition and Christ returns to his people again.

Do you believe that these signs are enough to show that Jesus is coming soon? your opinion on this matter is important to us