By Albert_Politics (self media writer) | 9 months ago 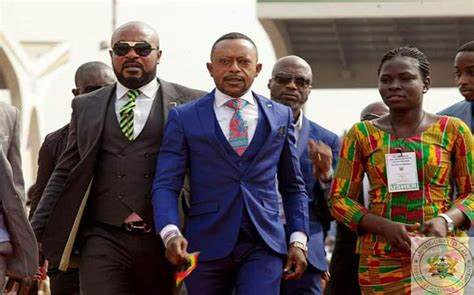 According to a report by Accra-based Asaase Radio, the court set its bail at a remarkable GHS 200,000 with two guarantees.

Glorious Word Power ministry founder and leader have been in jail and jailed since last Sunday for an assault on Fellow Pastor Nana Agradaa on Monday.

On September 14, 2021, he was arrested together with three of his junior pastors. They urged all followers to believe the Lord in the church's statement of his arrest.

"The Church, the International Glorious Word Power Ministries, desires to inform the general public about our Apostle General Oversight Dr. Isaac Owusu Bempah, who was detained by police on September 20, 1921."

"On Sunday, September 12, 2021, the Church says that there was a dispute outside the building during which several unidentified persons maltreated and arrested one of our junior pastors. The manner in which the arrest was carried out provoked a fight between the community and the church."

"Apostle Dr. Isaac Owusu-Bempah, who halted the ministry in the church and rushed to the scene to find out specifics of what transpired, was struck by arms firing and the need for help from the community."

"He proceeded to the Dansom Police Station and was later informed that he (Junior Pastor) had been transferred to the Greater Accra Regional Police Command, where Apostle Dr. Isaac Owusu-Bempah went after learning that one of his junior pastors had been imprisoned. When the Apostle Dr. Isaac Owusu-Bempah arrived at the Greater Accra Regional Police Command about 1:30 p.m., he was detained for further investigation."

According to the church, one of its pastors was injured during the raid and is currently being treated at a hospital.

What did Owusu Bempah do.

A video showed the man of God' in the midst of police officers at the Dansoman Divisional Headquarters surfaced on the internet. Owusu Bempah's men were later detained, according to a police statement, in connection with footage of them uttering threats and displaying weapons. According to the statement, Owusu Bempah allegedly encouraged his church members to assault the cops. Owusu Bempah and his boys were still in jail at the time the police statement was issued.

Content created and supplied by: Albert_Politics (via Opera News )

The Bride Trade In Ancient Babylon.