Naturally by virtue of the intense physical and mental training that monks undergo, it's no surprise to see a monk been this strong.

This muscled Thai monk seen sweeping the floor of a temple park in the picture is Buakaw Banchamek, a champion of Thai boxing or Muay Thai and also the world strongest monk alive. 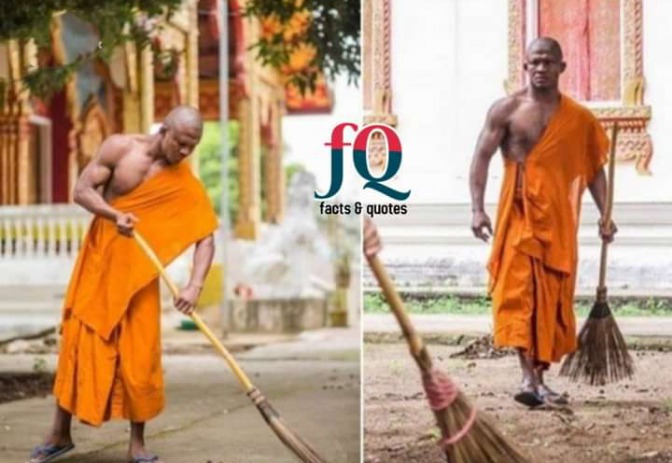 The photo reached China, Japan and other countries before the sturdy monk was identified as the Thai champion, according to sources from a website he Thai champion monk visited Taiwan two years ago for an exchange.

Buakaw was born 35 years ago under the name Sombat Banchamek, and won the prestigious K-1 World MAX championships twice, in 2004 and 2006, thus earning the nickname of the world’s strongest man.

However,so unfortunate for him he was defeated by Russian-based Azerbaijani fighter Khayal Dzhaniyev, leading to speculation that he was planning to retire. The picture of him wearing monk robes only reinforced the rumors that he had said goodbye to Muay Thai.

As a result, Buakaw came out to explain that he had only joined the monkhood for a short time as a sign of respect for a late king Bhumibol Adulyadej, who died and was cremated.

The boxer served as a monk for several days, according to media reports. As he was expected to participate in a world star contest, as a result he had already gone back into training, the reports continued.