In Somalia, there are estimated to be around a thousand Christians in a population of 8 million people, with possibly a couple thousand more in the diaspora. The Islamist Shabab civilian army, which controls a major area of southern Somalia, is dedicated to tracking down and eliminating all remaining Christians. 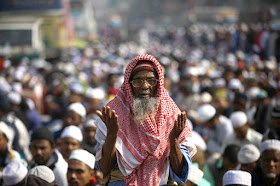 On Fridays, Christians go to mosques to avoid causing doubt. The books of scripture are kept hidden. There are no public gatherings, let alone a congregation. Catholic churches and burial cemeteries have been demolished.

The last nuns were chased out of Mogadishu, the devastated capital, in 2007. The previous year, an elderly religious recluse working at a nearby medical clinic was assassinated. The main Christian adherents left are Somalis from the surrounding area.

Taking and executing these Christians provides the Shabab with useful purposeful publicity, not least for instilling in its young warriors and suicide-planes the belief that America, Britain, Italy, the Vatican, as well as Ethiopia and Kenya, are all "crusaders" attempting to convert Somalis to Christianity. The UN follows obnoxiously close behind.

Obviously, Israel is also doing its part to discredit Islam. The insecure transitional administration led by Sheik Sharif Ahmed, whose authority runs pitifully over the territory that the Shabab does not yet control, is unlikely to support any of its inhabitants armed with a Bible. Despite espousing balance, he supports a version of Sharia Law in which every Somalian is born a Muslim and every individual who converts to another faith is subject to renunciation, which is punishable by death.

Several Somalis are executed on a regular basis for being Christians. Sometimes that is just a label that jihadists give to people they believe are working for Ethiopian enlightenment.

In any event, many people are fundamentalists. According to Somali sources and Christian groups studying Somalia from abroad, at least 13 people from underground houses of worship have been killed in the preceding few months. The majority were Mennonites who had been converted by evangelists near the Juba River in southern Somalia.