Net2 TV's "Seat Show" Continues Its Attacks, On "The Church" In Ghana. DETAILS

Net2 TV, has been on a spirited attack on the Christian religion, but according to them, it is an attack on what they deem as fake Christian leaders and "prophets" who are using juju and trickery, to amass wealth and destroy lives, all in the name of Jesus Christ.

So how did this thing start? Well, they never had this in mind. If you have ever followed how this program, "the seat show," (which "once became the talk of time, then lost its relevance and now, seemingly attempting too come back stronger") started, one will agree with my assertion. 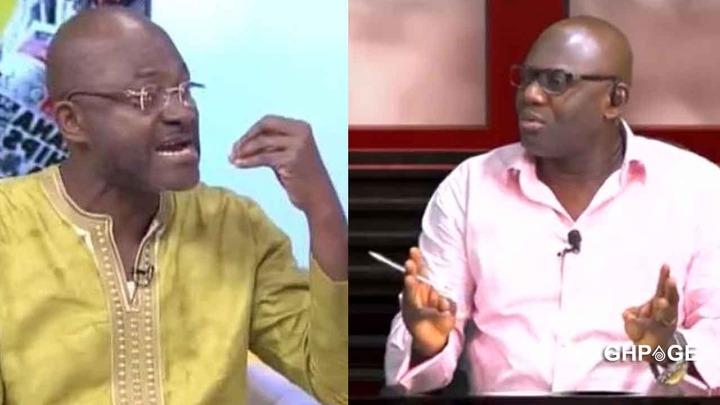 Well, this is how it started. Kennedy Agyapong was literally angry about the modus operandi of the famed and internationally reputed investigative journalist, Aremeyaw Anas and especially, when he, Kennedy Agyapong's name had been mentioned in the popular "Number 12" investigative report, as controlling about 3 ministries in the present NPP government, he had started this program, to also attack the personality and work of Anas.

Under the hosting prowess of Kwaku Annan, who is believed to be a JHS leaver, but have been practicing journalism for over a decade at Net2 TV's sister radio, Oman FM, he hosted Kennedy Agyapong and one will easily recall, how the pictures of Anas and even the mentioning of names of his colleague investigative journalists, became news, as the TV show, exposed Anas the more.

It was therefore, after this series that run for a while, that, suddenly, attacks on some "prophets" began. It is worth noting that, the divided church in Ghana helped them to have the effrontery to attack the body of Christ and from my analysis, every believer, pastor and whoever is in the church and calls himself a Christian, must accept blame, for this total disregard and attacks on our leaders.

Let me buttress this point with this information. This is the wall of the famous Christian body, "Ghana Charismatic Bishops' Conference" made up of literally, all the Charismatic and Pentecostal churches in Ghana. Look at these pictures below: 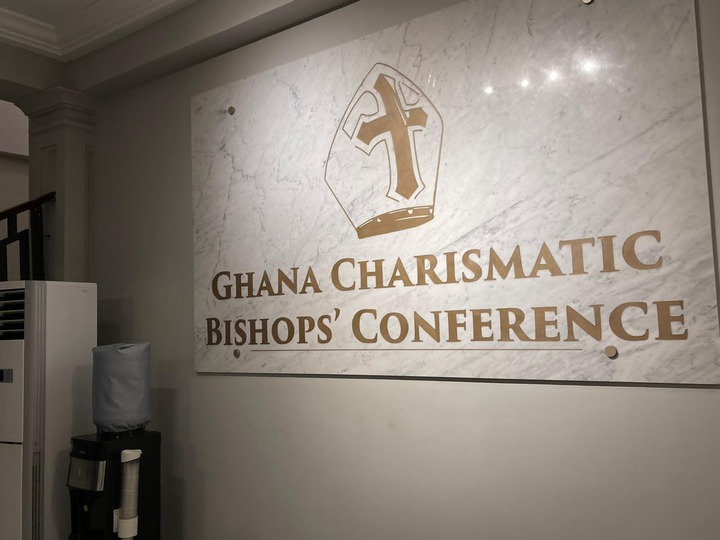 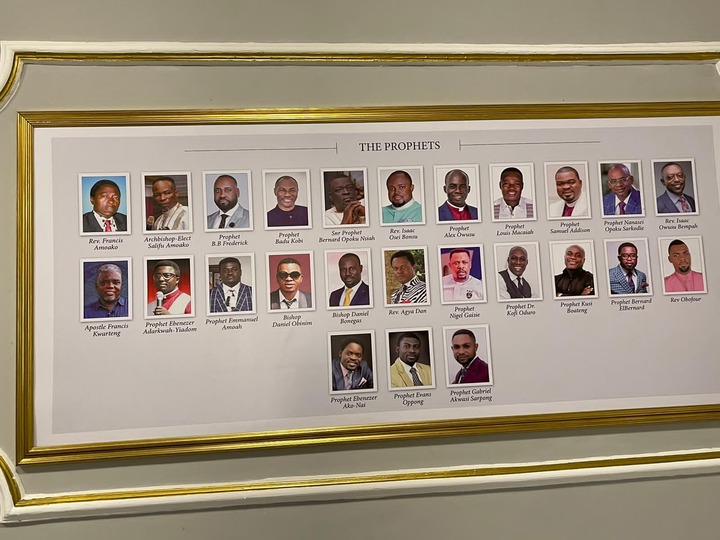 Look at the picture above very well. All the "prophets" deemed fake, are been celebrated here, on the office walls of this nationally reputed organization. Yes, can I repeat some of these? Prophet Obinim (Angel Obinim), Obofour, Prophet Sarpong (Bilibili), Agya Dan, Nigel Gaise, Prophet Badu Kobi, just name it!

So the question is, if the association, your church is likely to be a member of, celebrates these men, as 'PROPHETS" of God in the country, together with the other reputed men of God, why did many Christians, take sudden interest in the "Seat Show" and were excited that, Prophet Obinim was been exposed for sleeping with girls in his church, sleeping with wives of people, robbing a lady of a gold, using juju, etc? And these accusations, run through,, at least, for the names of "Prophets" I have listed out from the picture on the wall of the renowned association.

So you see, we all enjoyed it. And thanks to views on YouTube, Kwaku Annan, was making some good money personally and for the Net2 TV, which is obviously, not a so much productive media organisation, if not for its party in power.

Fast forward, after the attacks on these prophets, which Kennedy Agyapong made it clear that, he will close their churches, he literally "COULD NOT!" So at the end of the day, he had rather used his platform, to give these alleged fake prophets, "publicity" and advertisement, and these are rather expert marketers and it is no wonder that, they have strategically leveraged these free publicity and have bigger churches now.

Because, we allowed them to attack these younger "prophets," they had the effrontery to attack the giants and father figures also. Kennedy Agyapong mentioned names of Agyinasare, Mensa Otabil, etc as also fake. and that was when, the sleeping Christian, who are obviously "baby" believers, woke up from their sleep and wanted to attack back, but the floodgates had already been swung open.

Well, may stopped watching and that was when the show, went down literally! But in its spirited attempt to come back, which started just some 2months back, they have landed their attacking machine, on Prophet Mafred Acheampong and have not spared Bishop Dag Heward Mills.

Let me concentrate on the latter, as he is the nation's foremost minister of God, as he has 6,070 churches dotted around the world, a number of individual churches, no church that started in Ghana, has even half (3,035) of, to boast of. 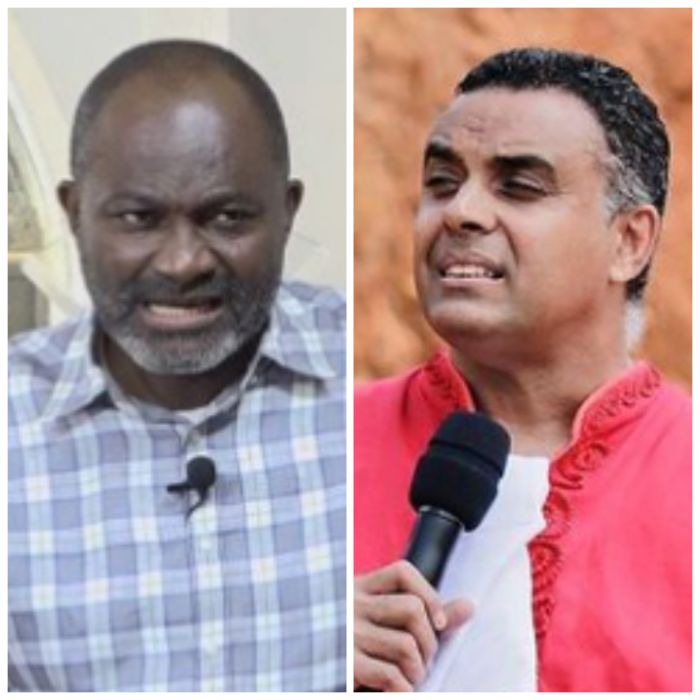 In the last Monday's edition, he played out an audio, where Bishop Dag was teaching on leadership and vision, and he proverbially used a "King" to illustrate how bad leadership can lead to underdevelopment. Kwaku Annan, went to every possible length, to create a problem for Bishop Dag, and his churches, one that they have threatened to close down his branches severally.

And sadly, this may be Kwaku Annan's success so far, on top of the hundreds of failures, the show has chalked. As Bishop Dag, has had to come out to set the records straight and also APOLOGIZE!

The Founder and leader of the Lighthouse Chapel International, Bishop Dag Heward-Mills, has apologized to the Asantehene, Otumfuo Osei Tutu II, after a sermon he preached in which he criticized the Asantehene went viral and offended his subjects, as many complained on social media, thanks to Net2 TV.

In the said audio, the renowned global evangelist preached a sermon about kingship, during which he used the Asantehene as an example, and questioned his impact and legacy beyond the yearly celebrations of his reign. The audio has offended the King’s subjects with many pouring out their anger via social media, with some threatening to attack Lighthouse Chapel branches in Kumasi, the seat of the Asantehene.

In a statement on Saturday, June 19, 2021, Bishop Dag Heward-Mills apologized to the Asantehene, explaining that the message was preached nearly 20 years ago but had been taken out of context maliciously circulated.

Bishop Dag Heward-Mills alleged that the message was maliciously reshared by certain individuals who had previously threatened to close down branches of his church in Kumasi.

He, however, thanked the King for handling the matter “graciously”.

“I am deeply saddened that a message I shared at a conference, nearly 20 years ago, has been taken out of its context and circulated by persons who have previously declared that they will maliciously cause our churches in Kumasi to be closed down. I wish to apologise to His Majesty, Otumfuo Nana Osei Tutu II, for any disrespect, insult or harm caused him or his royal court. Please accept my profound apologies for the statements I made,” excerpts of the statement read.

Bishop Dag has apologized and the church moves on. But hopefully, the Seat Show, meets its meter soon and its dwindling viewership, tumbles again, only for the show, never to have the voice, to attack the church anymore. 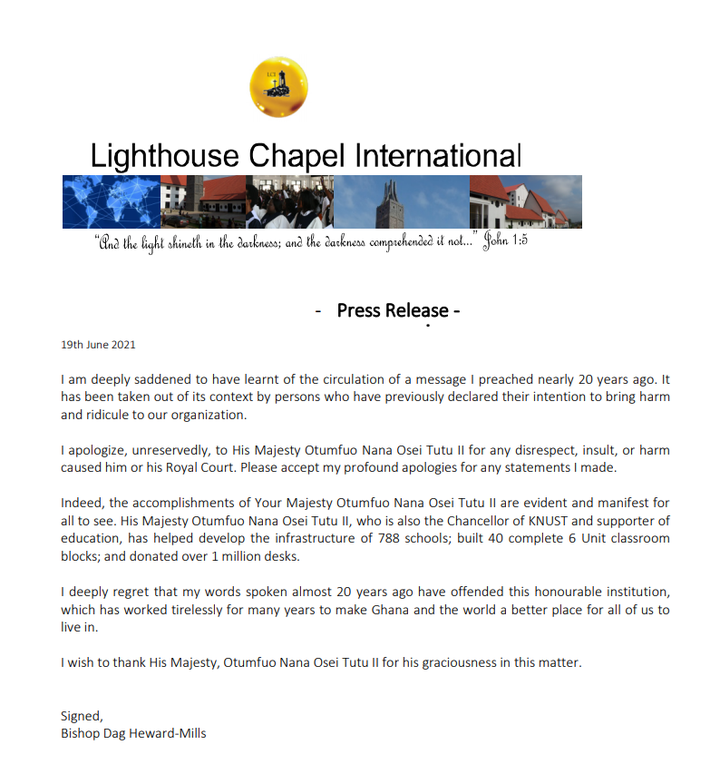 "Don't Eat the Cat" Fans tell Mzvee After Posting Pictures with her Pet.

(Video)- Happy moment Kwame Yogot storms a shop and jams to his hit song with his fans.