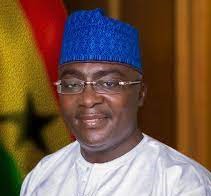 He questioned why some people are attempting to make fun of Dr. Bawumia's admission that he formerly belonged to the association in the church, describing him as a unifier who does not discriminate along religious lines and noting that it was a way of life he grew up with.

Speaking last week at the beginning of the Evangelical Presbyterian Church Ghana (EPCG 175th )'s anniversary celebrations, Dr. Bawumia emphasized the necessity of peaceful coexistence among the many religions in Ghana.

Before my mother converted to Islam, I was an active member of the Methodist Boys' Brigade. He said, "I believe I am the only Muslim in the Boys' Brigade.

His dad has made a passionate defense despite the propagandists who sought to use his remarks for political gain appearing to have twisted them.

Bawumia's pursuit of religious tolerance is not new to him, said Mr. Samuel Kwasi Ankamah, since they grew up together and he observed similar qualities in him as an older brother.

"I want to reaffirm that the present vice president, Dr. Bawumia, was a part of the Brigade. He joined us at Tamale's Methodist Church when we were kids. He was with the juniors, along with my other brother named Raja and my younger brother Kwame Brefo Ankamah, where there were two sections: the seniors and the juniors.

"I'd like to say that he's a person that unites people since he respects all religions equally. He wouldn't go to church with Christians, in my opinion, since he's a Muslim. He attended the funeral on a Saturday after our mother passed away, as I recall. He came for the burial before leaving because I'm from Nsuta Kyebi and the church service was held there. I assumed that was it, but on Sunday as we were getting ready for church at home, he and his wife had already come and were on the church grounds. He continued, "He joined us in the services.

4 Secrets On How To Make Love Last Long

The Best Starting Eleven That Coach Otto Addo Should Have Used Against Brazil, Afena, Wollacott Drop