At the beginning, in order to make it easier for the reader to follow the opinions of the five schools of fiqh about various aspects of Hajj. we shall briefly outline their sequence as ordained by the Shari'ah. The Hajj pilgrim coming from a place distant from Mecca assumes iḥrām from the miqat' on his way, or from a point parallel to the closest mîqat, and starts reciting the talbiyah. 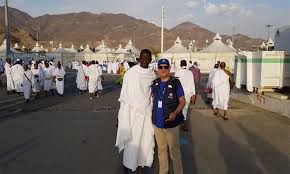 JuIn this there is no difference between one performing 'Umrah mufradah or any of the three types of Hajj (i.e. tamattu', ifråd, qiran). However, those who live within the haram of Mecca assume iḥrām from their houses. On sighting the Holy Ka'bah, he recites takbir (i.e.al, "God is the greatest') and tahlil (i.e. There is no god except Allah') which is mustaḥabb (desirable, though not obligatory).

On entering Mecca, he takes a bath, which is again mustaḥabb. After entering al-Masjid al-Harām, first he greets the Black Stone (al-Hajar al-'Aswad) if possible kisses it, otherwise makes a gesture with his hand then makes the tawaf (sevenfold circumambulation of the Ka'bah) of the first entry, which is mustaḥabb for one performing Hajj al-'ifråd or Hajj al-qiran.

Then he offers the two raka'at of the tawaf, again greets the Black Stone if he can, and leaves al-Masjid al-Haram. After this, he remains in the state of ihram in Mecca. On the day of tarwiyah, i.e. the eighth day of the month of Dhi al-Hijjah, or if he wants a day earlier, he goes forth towards 'Arafat If the pilgrim has come for 'Umrah mufradah or Hajj al-tamattu', he performs the tawaf of the entry, which is obligatory for him, and prays the two raka'at of the tawaf. Then he performs the sa'y between Safa and Marwah, and, following it, the hala (complete head shave) or taqsir (partial shortening of the hair of the head). 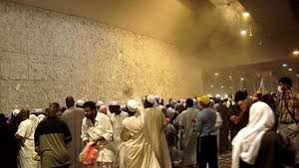 Then he is relieved of the state of ihräm and its related restrictions, and things prohibited in ihram become permissible for him, including sexual intercourse. Then he proceeds from Mecca after assuming thram for a second time, early enough to be present at the wuquf (halt) at 'Arafat (referred to as 'mawqif, i.e. the place of halting) at noontime on the ninth of Dhū al-Hijjah. Assumption of ihram on the day of tarwiyah, i.e. eighth Dhu al-Hijjah, is preferable. The Hajj pilgrim, irrespective of the type of Hajj he intends to perform, turns towards 'Arafat, passing through Mină.

Offering the two prayers immediately after one another is considered mustahabb by all the five schools. According to the Hanafi, Shafi'i, and Hanbali schools, it is obligatory to spend this night (i.e. the night of the 'ld) at Muzdalifah; for the Imamiyyah, it is not obligatory but preferable. After the daybreak, he makes the wuquf at al-Mash'ar al-Haram, which is wajib for the Imamiyyah and mustaḥabb for other schools. And at Muzdalifah, preferably, he picks up seven pebbles to be thrown at Minā. After this, he turns towards Mina before sunrise on the day of Id. 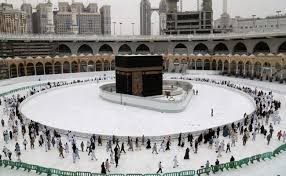 There he performs the ritual throwing of stones, called ramy, at Jamarat al-'Aqabah, no matter which of the three kinds of Hap he is performing. The ramy is performed between sunrise and sunset, preferably (istihbaban) accompanied by takbir and tasbih (proclaiming God's glory by saying 'How far God is from every imperfection!). 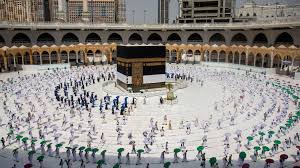 After this, he performs the halq or taqsir, irrespective of the kind of Hajj he is performing. After halq or taqsir, everything except sexual intercourse becomes permissible for him according to the Hanbali, Shafi'i and Hanafi schools, and according to the Maliki and Imámiyyah schools, everything except intercourse and perfume.

Then he returns to Mecca on the same day, i.e. the day of the idr, performs the tawaf al-ziyarayh, prays its related two raka'at, regardless of which kind of Hajj he is performing. After this, according to the four Sunni schools, he is free from all restrictions including that of sexual intercourse. Then he performs the sa'y between Safa and Marwah if on Hajj al-tamattu', by agreement of all the five schools. For the Imamiyyah school, the sa'y after tawaf al-ziyarah is also obligatory for one performing Hajj al-qiran and Hajj al-'ifråd.

But for other schools, it is not obligatory if the pilgrim had performed the sa'y after the tawaf of first entry, otherwise it is. For the Imamiyyah, it is obligatory for all the types of Hajj to perform another tawaf after this sa'y. Without this tawaf, called tawaf al-nisa', one is not relieved of the interdiction of abstinence from intercourse. Then the pilgrim returns to Minä on the same day, i.e. the tenth, where he sleeps on the night of the eleventh, performs the threefold throwing of stones (ramy al-jamarát) during the interval from the noon until the sunset of the eleventh by consensus of all the five Schools of Islamic Law. 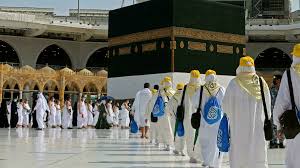 For the Imamiyyah, the ramy is permissible after sunrise and before noon. After this, on the day of the twelfth, he does what he had done the day before. All the legal schools agree that he may now depart from Mina before sunset. And if he stays there until sunset, he is obliged to spend the night of the thirteenth there and to perform the threefold ramy on the day of thirteenth.

After the ramy, he returns to Mecca, before or after noon. On entering Mecca, he performs another tawaf, tawaf al-wada" (the tawaf of farewell), which is mustaḥabb for the Imamiyyah and Maliki schools and obligatory for the non-Meccans from the viewpoint of the remaining three. Here the acts of the Hajj conclude.