By AccraBlogger (self meida writer) | 26 days

For many people who claim to have been called by God to preach his word to people, church has become one of their most lucrative businesses. Many are self-proclaimed men of God who only use the most high God's holy name to cheat and extort money from people. If not that, why are some pastors claiming to be spiritual selling a variety of products?

Pastor Eddie Bregmang worked under his senior pastor in the Ashanti region of Ghana, specifically in the Tabre community, before starting his own congregation, Latter Day Believers.

Things were difficult for him running his own church, so he sought advice from Rev. Boadi, who assisted him with a scholarship of Ghc15,000 when he studied under him and graduated. It was the same money he used to purchase a plot of land in Tabre where he planned to build his own church.

The late pastor Eddie's church was put under the oversight of the school after the collaboration with Lords Teaching School. He was to keep track of the church's finances. Later, the deceased claimed that the COVID-19 restrictions were preventing him from receiving more offertory. He used to make excuses for how little money he made.

This went on for a long time, and the school began to suspect that the deceased was not telling the facts. They named someone to keep an eye on the church's operations. Audits later revealed that the deceased had purchased a plot of land and had begun construction on his home.

He was questioned about how he was able to build a house while working full-time as a pastor. He was unable to adequately justify himself to the school.

He hanged himself in an uncompleted building behind his house, fearful of being reported to his spiritual mother and the owner of the school, Rev. Akodua Beatrice. This morning, his body was discovered hanging. 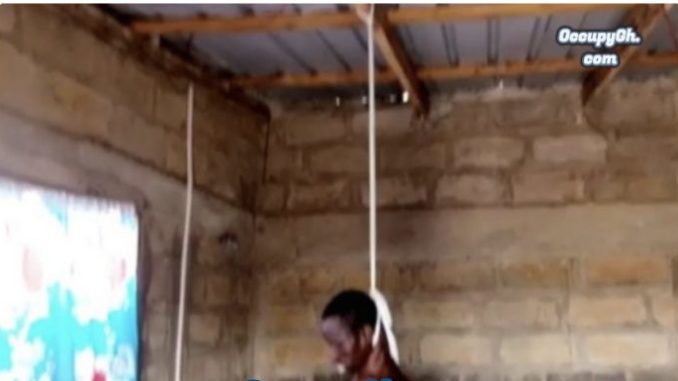