It is bound to happen, this was the words of some members of the church after the incident was reported.

It is known that the house of God is a holy place to be and all activities undertaken there must complement its holiness.

Meanwhile the actions of a women of one of the popular denomination in that town [for confidential purposes] did not showed any attitude of righteousness in anyways.

The female church worker was caught on camera taking her share of the church offertory after service.

For reasons of why she understood that act, it is yet to be known but some of the members of the church and some other residents commented on the incident. According to the church members, they believe the women was not a complete born-again believer but only a church goer.

"If you ask me, I will say she didn't do well at all better still she must have her reasons for undertaking such a carnal action after all that was preached today in church", a member of the church said.

One of the church elders said he was overwhelmed upon hearing the incident and he refused to believe it at first until he saw it with his own eyes.

"Frankly when they told me I disbelieved but when I saw her in that state infact it was overwhelming... She is the one who sweeps here most of the time, even more than an usher... Hmmm," he said.

The incident happened immediately after one of the priests made his exit from the church premises. The woman emptied the basket containing the offertory unto the floor and began selecting her portion. 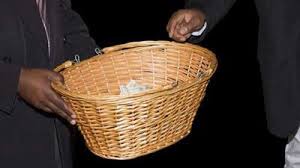 Upon realising, she had taken the higher denominations which includes some GH¢50, GH¢20 and GH¢10 notes after taking a thorough search into the offertory.

The women then hid the stolen amount in his brassier after she decided she had taken enough.

“There is nothing wrong with what she has done, I side with her and will side with her even if she does it again. They[the church] likes collecting money too much and they do not even care about the members whether they have some or not,” a resident stated.