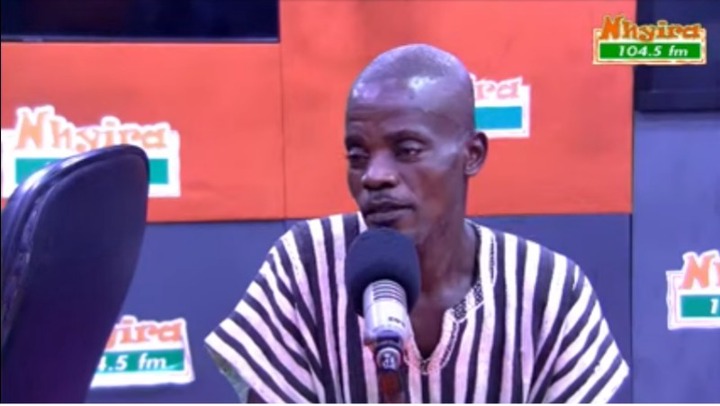 A 49-year-old father named Amidu from Akyem revealed what transpired after his sister burned down their father's shrine and idols years ago. The man explained that their father was a great fetish priest who initiated them to idol worshiping at their tender age. When he travelled to Kumasi, he lost interested in idolatry but focused on his life and worship God.

Years later his father passed away but no family member was willing to continue the fetish priest work. His sister brought out all those idols from the shrine and burned them including the shrine and they returned to Kumasi after the father's funeral. The man said he mysteriously experienced abdominal pain and also began to feel pain in his legs and could not walk without a walking stick.

He went to the hospital but the doctors found nothing wrong with him, his condition too worsened as the days passed by. Amidu says he went to his hometown to consult a herbalists to treat him. A day later he received a call from his wife that his daughter also has mysteriously paralysed also suffers from mental illness. He stopped the treatment and went to Akyem to take care of his daughter. He immediately rushed her to mallam to help the girl.

The father continued that his daughter recovered from her illness but when he brought her home, her condition worsened. He he consulted another mallam who revealed to him the shrine and the idols his sister burned months ago has caused the mental illness of his daughter and it will keep tormenting the family till they perform rituals for them. Although the mallam perform rituals for them and tried his best to stop his problems still his daughter is not recovering from mental illness. Amidu is pleading with the general public to help treat his daughter.