The traditional Authorities at Assin Andoe in the Assin South District of the Central Region today performed a purification rite for Opanin Kwame Atta, popularly known as Showboy, a 60-year-old man who admitted to having sexual intercourse with his 3 biological daughters. 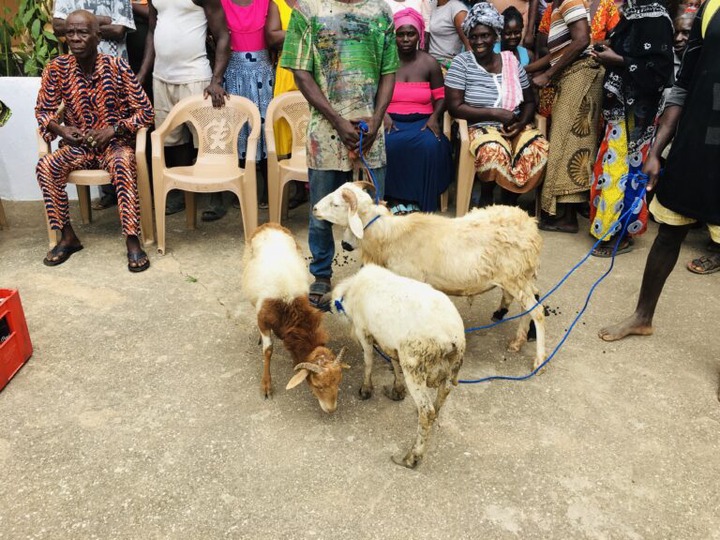 Out of the Ghc12,000 fine and 5 sheep imposed on him by the chiefs and elders two weeks ago, meant for pacification and sacrifice, he was able to raise a cash Ghc 8,000 and pleaded to pay 4 sheep today due to financial constraints.

The Chief of Assin Andoe Nana Atta Banafo III, who doubles as the Adontehene for the Apimanim Traditional Council after the rite at the palace told Rich Fm and Angel Fm/TV reporter Shadrack Owusu Asante that, they will perform another two rituals at the places where the incestuous act occurred including the farm. Thisis to prevent any tragic occurrence on the land and the family of the culprit.

He described the practice as an abomination in the sights of the gods and an evil act that must be condoned in any society, admonishing the public to desist from it.

The incident is said to have happened at Assin Akyesan near Ochiso which is under the Andoe Traditional Council.

One of the two young men who were earlier fined Ghc 2,400 for not being able to substantiate the allegation that, showboy had been sleeping with his daughters when the case was called at the chief’s palace today expressed his happiness for being vindicated.

A 60-year-old man was fined GH₵12,000 for having sexual intercourse with his three biological daughters at Assin Akyesan in the Assin South District.

The traditional authorities of Assin Andoe in the Assin South District also demanded some items including 3 full-grown sheep, crates of assorted drinks, and bottles of exotic schnapps from the culprit.

The suspect, Kwame Atta, popularly known as Showboy admitted to having sexual intercourse with his own daughters when he appeared before the traditional leaders at the Assin Andoe Palace.

After deliberations, the Chief charged the culprits accordingly.

The issue came to light following a strange disease that bedeviled the family for many months with no cure, hence the revelation about the incestuous acts.