By Capitalnewsonline1 (self media writer) | 6 months ago 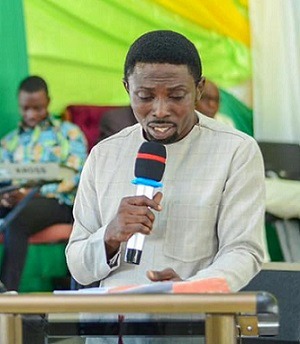 Coalition For the Legacy of John Taylor, a group of members of Christian Divine Church drawn from across the country and beyond has set the records straight in clarifying some disturbing yet pertinent issues of the church which have been wrongly peddled by the media.

The group whose motive is to ensure sanity in the church and respect for its leadership made these clarifications at a press conference at the National Headquarters of the church at Tarkwa on the theme “The Cycle of Division of The Church Must and Will end”.

According to the coalition, it is aligned towards only one objective, and that is the legacy of Prophet Apostle John Taylor, the founder of the church.

Speaking at the press briefing, Ekow Dadzie, the convenor of the group said the issues ongoing in the church has for the past three years, affected the growth and smooth administrative running of the church adding that it has been sixty-two (62) years since God, through Prophet Apostle John Taylor of blessed memory established for the liberation of man, Christian Divine Church.

He hinted that the pace of growth as a church has not been commensurate with our number of years in existence since the departure of the founder into glory.

He noted that this has occurred because of disunity which has crept into the fabric of church leadership disrupting the peace and development of the church.

“We have had enough of the retrogressive tendencies that divide the rank and file of church leadership by a few who feel they are individually bigger than the collective soul of the church. It has taken a lot of pains and deep introspection to address our issues this way. Our joy is not to discuss matters publicly.

The situation on the ground leaves us no other choice than this. We chose this medium because the real facts of the situation have been misrepresented to members all over the world in very shocking and self-serving ways”, he said.

He noted that persons behind these issues have already taken the matters to the media and caused the media to publish distorted facts adding that in some instances, they have imported unrelated lies and gotten some radio stations and online portals to circulate them in their bid to bring ridicule and public condemnation to the leadership of the church.

Ekow Dadzie said “we have called for this interaction because some group made up of Elders and Pastors of the church are bent on using mostly unlawful and irregular means to take over the lawful powers of the Chairman of the church and by extension the leadership as provided for by our church’s constitution.

He disclosed that the chairman of the church, Apostle Ebenezer Boahen, has come under a series of threats of legal actions for constitutional breaches which have so far failed the test of judicial scrutiny.

However, the convenor of the coalition noted that Pastors of the church have demonstrated a loud silence in fear of declaring open support for the chairman.

He further urged members of the church to desist from unlawfully indulging in the leadership of the church stressing that all persons, be it an Elder, ordinary member or Pastor must cease all attempts to arrogate powers the constitution has not given to them.

Ekow Dadzie emphasized that the Tarkwa High Court has issued an order of interlocutory injunction on all persons to refrain from conducting elections and any form of illegal leadership meeting until the matter is conclusively dealt with.

He urged the current chairman, Apostle Ebenezer Boahen to comply with the decision of the court when it comes, as it will clear the perception that he seeks to perpetuate his stay in office.

” We do not believe the rumour that Apostle Ebenezer Boahen does not want to leave the seat when the right systems fall in place, so we plead with him not to lend any credit to that perception,” he said.

He called for a national dialogue of pastors, elders, and members to reconcile the differences causing the deep division in the church.

He recommended that the seat of the chairman should be devoid of all political coloration, and beseeched members to pray for the church and its leadership.

He further advised the media to always ensure to do proper cross-checks before peddling falsehoods about the church and its chairman.

Content created and supplied by: Capitalnewsonline1 (via Opera News )

NPP Must Listen: Forgive Alan For Voicing Out What You People Fear To Say- Top NDC Lawyer Speaks