The atmosphere at the funeral grounds was filled with grief, as the children of late Opanyin Kwadwo Bonsu read a tribute while the latter was laid in state at his hometown. For Bishop Obinim it is such a depressing moment as he only gets to bid his confidant, advisor, and guardian in who he had found absolute peace and counsel in his entire life.

The tributes which were read by his sisters, and the grandchildren of the father even amplified the sorrows in his heart. He managed to muscle up some confidence to stand before sympathizers and spoke about his loss.

As the only surviving parent after Obinim had turned eighteen when the mother died, Opanyin Kwadwo Bonsu meant a lot to the children and most especially Angel Obinim, who had become a prominent personality in religious matters. As echoed by the siblings of Angel Obinim’s loss, Opanyin Kwako Bonsu will be no more by them to defend the family against any trouble nor lead them to resolve the conflict they encounter in their lives.

In a teary moment, they said; “who do we run to in times of trouble? You were all we had and you never abandoned us.” They shared as a way of assuring of the spirit of the late father, that they will remain united as a family as he had always wished. 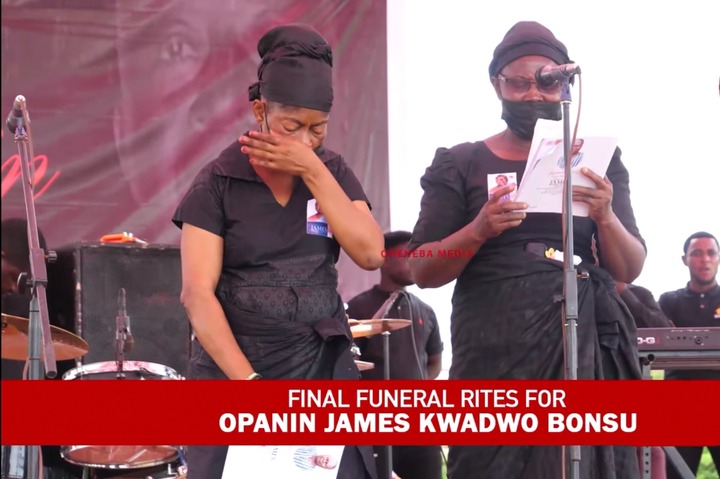 “Our dad reminded us to be united. Today we remember you for being a supporter and a problem solver. We have lost a great man, a father. May God welcome you into his bosom as you take an eternal rest,” the siblings read from their tribute.

But things got emotional after Obinim walked past the body of the late father. In his mind could be the conclusion that the father is finally departing for the afterlife and there is nothing he could do about it.

The memories of the great lessons and encounters he had shared with the father were flushing through his mind and he could hardly stand it. Indeed, Obinim had paid his last respect to the father by sponsoring such a great funeral as that for him.