Satan/Lucifer was never in Heaven?

By adsamuel (self meida writer) | 6 months

WHEN WERE ANGELS CREATED?

In my previous article, it was clearly established that ALL angels are ministering spirits created to minister not unto God but unto man. In other words, the primary reason for the creation of angels was that they should be servants to men - Hebrews 1:14.

The Bible didn't give a clear picture when actually angels were created. But we know from Genesis 1 that only God could have existed outside time, creation itself occurred in time. Now if man was created on the sixth day according to Genesis 1, it is very safe to say that all angels including Lucifer (satan) were created on the sixth day in the morning, while man was created in the evening. If angels are to serve man, then they must be created before man.

SATAN (LUCIFER) WAS IN EDEN NOT HEAVEN

Contrary to what many think, Lucifer who is now Satan was never in heaven. Rather, he was in the garden of Eden. His job was to serve Adam. Remember, as earlier said, angels were created to serve man, so Lucifer (Satan) was the angel charged with the responsibility of serving Adam. How do we know?

"THOU HAST BEEN IN EDEN THE GARDEN OF GOD; every precious stone was thy covering, the sardius, topaz, and the diamond, the beryl, the onyx, and the jasper, the sapphire, the emerald, and the carbuncle, and gold: the workmanship of thy tabrets and of thy pipes was prepared in thee in the day that thou wast CREATED.

[14]THOU ART THE ANOINTED CHERUB that covereth; and I have set thee so: thou wast upon the holy mountain of God; thou hast walked up and down in the midst of the stones of fire."

The verse above makes it clear Satan was in Eden and not heaven. Many have argued that verse to be referring to a human king of Tyrus. But when the whole book of Ezekiel 28 is read properly, one clearly sees that Ezekiel 28:13-14 couldn't be talking of a human. Why? First of all, apart from Adam and Eve, no other human was in Eden. Secondly, A human cannot be a cherub ; a cherub is an angel of high rank. Who else could be this anointed cherub made of precious stones, pipes and timbrels if not Lucifer the devil himself?

DID SATAN EVER TRY TO OVERTHROW GOD IN HEAVEN?

[12]How art thou fallen from heaven, O Lucifer, son of the morning! how art thou cut down to the ground, which didst weaken the nations!

[13]For thou hast said in thine heart, I WILL ASCEND INTO HEAVEN, I WILL EXALT MY THRONE ABOVE THE STARS OF GOD: I will sit also upon the mount of the congregation, in the sides of the north:

[14]I will ascend above the heights of the clouds; I WILL BE LIKE THE MOST HIGH.

The scripture verse above is undoubtedly one of the most misunderstood verses of the Bible. It is from this verse that many have wrongly assumed Satan to be in heaven planning and engineering God's overthrow. But how could a created being even think of overthrowing his creator? Sounds like an insult right? It's like a manufactured car thinking and planning to overthrow man his creator. To hold such position is not only funny but preposterous.

Those verses are not saying Satan was trying to overthrow God in heaven, rather, those verses expose how Satan was envious of Adam. It was Adam Satan wanted to overthrow - that was his plan and that was the iniquity that was found in his heart. I'll prove that in a moment

Take note of the following :

* '' I WILL ASCEND INTO HEAVEN " : This already shows satan was not in heaven. Heaven was actually made for man and Satan also wanted that hence his statement "I will ascend into heaven"

* " I WILL BE LIKE THE MOST HIGH" : Again, this statement is not saying that Satan was trying to overthrow God and become God. Of course, that's absolutely unthinkable and impossible. Remember that Adam was created in the "likeness" of God. Satan also wanted to be that way - he desired to become like Adam who was the LIKENESS of God. So the phrase "like the most high" simply means in the likeness of God! So we clearly see that Satan was never in heaven at anytime, he was never a choir master who wanted to overthrow God. Rather Satan was an angel created to serve Adam in Eden, who was envious of Adam's position and dominion. His plot was clearly to take Adam's place and not God's.

Time will fail me to explain the "war in heaven" recorded in Revelation chapter 12. However, know that the book of revelation is a vision. Visions are never literal and cannot be taken at face value. For example, the vision God showed to Peter in Acts 10:9-16. Peter literally thought that God was telling him to eat unclean animals, but the interpretation of that vision was how that God has extended his plan of salvation to the Gentiles (unclean). Hence, whatever is written in the book of revelation would demand proper explanation and must never be taken at face value. Shalom!

﻿Thanks for reading and stay safe. 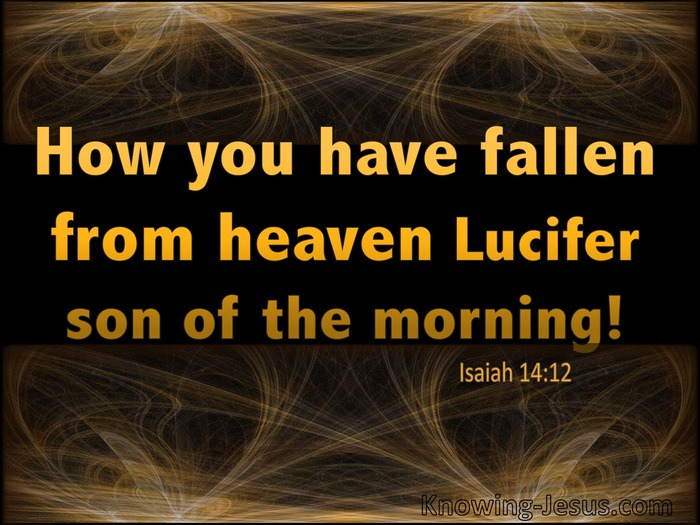 Love Shown By Some Animals Sometimes In Amazing Ways; Take A Look At This One