Dipo; Puberty Rites among the Krobos of Eastern Region. 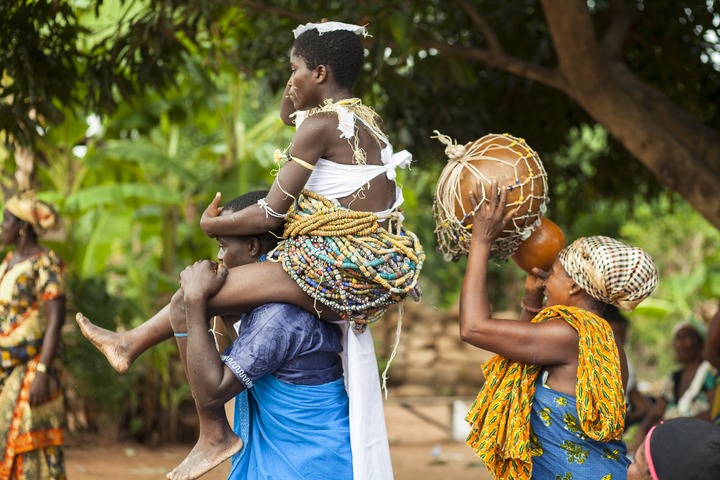 Puberty Rites called Dipo among the Krobos is a very prominent event which has been carried out for years despite the influences of education, modernization and missionization. The practice is held very strongly by the Krobos and it is ensured that every female in the tribe undergoes the rites. The rites are held every year between the months of April and May. Several girls partake in this event which lasts for a period of four days during which they spend most of their time in the Dipo house where the rites take place.

During this period, the girls are dressed in a special way to show that they are initiates. They have food restrictions and are only allowed to drink water from a well. They are taught the Klama dance, undergo a ritual bath and the crux of the rite is when the girls are made to sit on a stone which is believed determines virginity. Any girl who is found not to be a virgin at the time of the rites used to be ostracized in the past and was treated as an outcast. Nowadays, a set of purification rituals are performed for such a girl. On the last day of the rites, the girls are dressed up in colourful Kente cloth (a traditional cloth in Ghana) and adorned with a lot of beads on their neck, arms and waist. A durbar is held during which the girls perform the Klama dance amidst singing and in the presence of onlookers.

In the past, when there was no formal education, the rites served as a form of vocational training period for initiates where they were taught housekeeping and child rearing skills. The girls were therefore initiated into womanhood after which, they were ready to be married. The rites have undergone a number of changes over the years. It was previously held for girls who had reached the age of puberty and were of marriageable age but now girls as young as two and four years of age are made to go through the rites. The period for the rites has also lessened. In the past, the girls used to be camped in the Dipo house for a period of a year, then it reduced to some months and then a few weeks and today, a period of four days. Formal education is mostly attributed to this change. Marks used to be made on the back of the hands of the participants. These days, it has been replaced with photography. There have been a lot of discussions about the exposure of the body as the girls are made to wear the very minimum clothing and have their breasts exposed during the rites. There have been calls for the abolishment of the rites as it is seen as a fetish practice which also exposes girl’s nudity to the public. However, the Krobos still hold strongly to this cultural practice which is indigenous to them and is seen as an emblem of the tribe.