By MrsCelestial (self meida writer) | 2 months 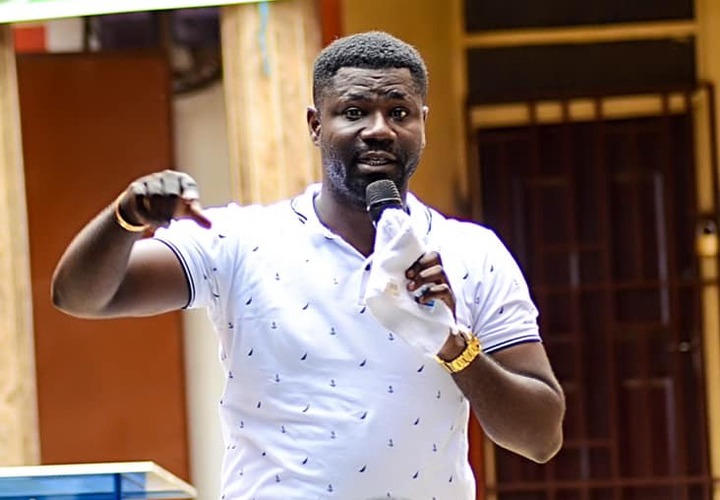 Award-winning broadcast journalist and host of the most listened-to-religious breakfast show in Accra, "Ghana Beye Yie" on Vision1 FM, Reverend Nana Yaw Sarfoh has become a household name. His innovative way of making the gospel, the center of attraction and one of the most listened to, may well be a wonder to many.

His meteoric rise, was founded on diligence and a proven track record. Shaquille Oneille as he is affectionately called is a product of the Boamponsem Senior Secondary School, and went on to graduate from All Nations University College where he was awarded a Bachelor of Science Degree in Management.

He was ordained as a Reverend minister at the Royal Victory Family Church International headed by Apostle Solomon Oduro on June 22, 2017.The multiple award winning broadcaster previously worked with several stations, such as Max FM, Spark Radio, Fox FM, etc, before finally landing his biggest breakthrough, at Accra based Vision 1FM, a radio station owned by Dr Kwame Kyei, CEO of Unity Group of Companies,

His exploits as host of Fox Morning Drive prior to this big break, where he had replaced renowned Captain Smart, had triggered the management of Vision 1 FM to poach him, where he would rise through the ladder fast and soon become the Programmes Manager, and host of the Vision 1 FM. Rev. Nana Yaw Sarfoh was soon adjudged as the best radio mid-morning show host of the Year award at the 2018 edition of the Radio and Television Personalities Award and several others followed.

Well, if you ever listened to his show, it was more of teaching God's words, inspiring faith in people and it could never end, without an attack on satan! As he exposed a mystery about satan or called out his tricks on God's people and coupled with killer prayer bullet points, his thousands of listeners, will call in and share testimonies of how the program, had turned their situations around.

Well, fast forward, his woes began maybe around this year. Way before this, he had personally hinted or should I say, "Prophesied" of this potential doom, as two years ago, he had shared in an interview that: 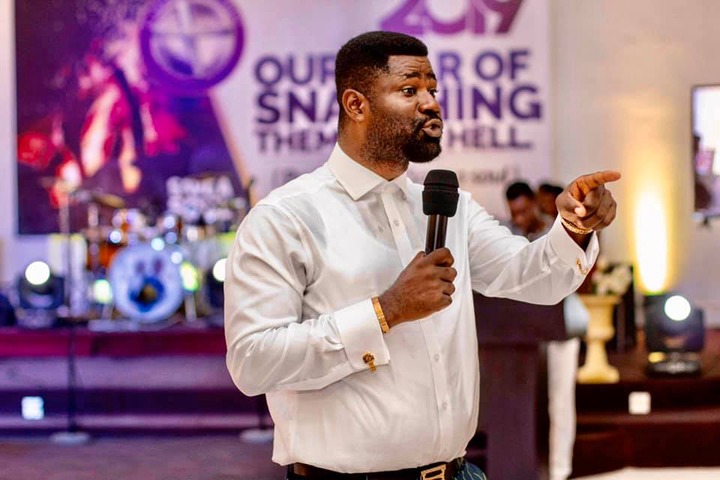 "Using himself as an example, Nana Yaw said he had been attacked spiritually several times and had it not been for how strong he was, he would have been dead by now. “I pray a lot and commit myself into the hands of the Lord and that has helped me survive me for years now. I was paralyzed for almost three months but here I am today still strong and continuing my work.

"It is amazing that those who plot bad things against me come to confess to me and I give them airtime on my show. I don’t have bodyguards or any charm but the Lord I serve is my everything,” he had said. According to Nana Yaw Sarfoh, a radio presenter who handles spiritual programmes like his will fall and even end up dead if his spiritual life is weak.

“All sorts of spirits want to come and test you to see whether you are truly a man of God or not. Some of the revelations I hear amaze me. I never knew there were plots to kill my wife and children but they never succeeded and came to me to confess. God directs me as to where to go and who I shouldn’t be friends with and my instincts have never failed me,” he added," he said.

Well, and these spiritual attacks have come in drones now, as this fine gentleman, who was happily married to his lovely wife, Janet Sarfo and were blessed with three handsome kids, cannot even see his own kids now and his marriage too is on the rocks now. 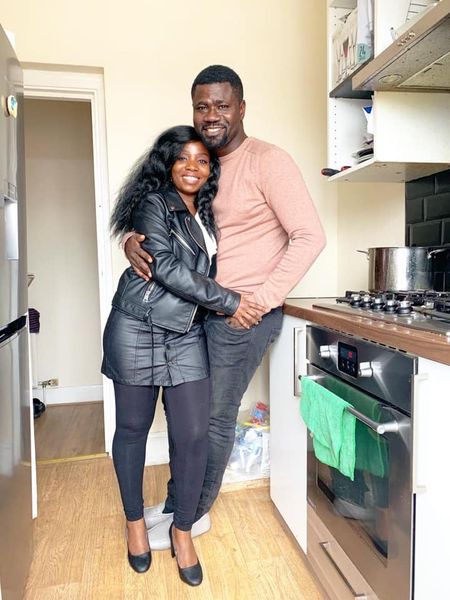 Last two years, he posted that:

"To the one woman that owns my heart, am wishing you a day just as beautiful as you are. Simply waking up to you fills my life with colors of love, joy and peace. I love you my wife. Every day that I wake up to your good morning kisses reminds me that I have the best wife ever.

No matter how many years pass by in our marriage, there will be two moments when I will like to be with you. Now and Forever! Love you, my sweetie. I just want you to know that you are everything for me. A wife I’m proud of! I need not wait till your birthdate before i celebrate you, Therefore I’m celebrating you today because you deserves it. I Prophesy to every soul, may you found LOVE in every department of your life in Jesus name...AMEN #RevNanaYawSarfoh 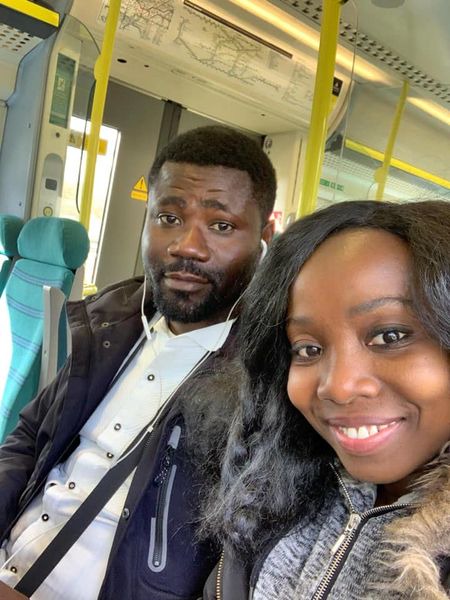 In another viral post, he had posted about "I won’t trade my wife for anything" and this wet viral, as many women shared it, to shade their husbands, who may not have been singing their praises. But fast forward to present day situation, the wife, may have traded him, for a reason, that both have not yet made public yet.

In most recent news about him, Nana Yaw Sarfoh is facing a divorce and has also not even seen his children for more than two years.

"I have gone through a lot in recent times. Like every marriage, I've had challenges but never expected that things would get to this point. My wife left the house over our issues and on October 6 last year, she served me with divorce papers. All my attempts to get the two of us to talk about the issues have proven futile. Before she even served me with the divorce papers, my wife had taken our four children away for more than two years. I have searched for them everywhere I thought they could be but I haven’t been able to see them,” he said.

Interestingly however, his opinion of his wife, could not in anyway, have arrived at this point, and that is where I am forced to ask, "if its the devil he attacked, who is now at work, causing havoc?" What do you think?

As he had intimated just five (5) year ago that:

“My wife, Janet has been there for me through thick and thin. She resigned as the senior PRO for African Mining services (AMS), where she earned close to Gh¢ 7,000. She had to stay home to take care of our kids. If she was able to that for us, why shouldn’t I do same for her. The fame I'm enjoying now is due to serious prayers by my wife. I believe my wife is the reason why I am alive today. She is very prayerful. In fact, my wife and family only come second to Almighty God. I don’t exist without them” he said.

“Any who tells you marriage is all fun is telling lies. We have had our challenges but we try as much as possible not to let any problem destroy the beautiful relationship we have together and that I believe has helped us a lot” he added.

His wife then, Janet who was by him during the interview had also shared how her husband is the most wonderful thing, that has ever happened to her and enjoy being supportive of him. “I support him a lot with prayers and I sometimes assist in his administrative work too,” she had said.

So its unfortunate that, this bond, could not hold eventually, after close to a decades marriage. Then latest "attack" came the viral controversy about why he had to leave Vision 1 FM, on the note of a scandal.

Bloggers had alleged that, Rev. Nana Yaw Sarfoh of Vision 1 FM left the station after allegedly defrauding a group of people out of over $500,000, this came to light, as he joined Kingdom Plus FM in the wake of that scandal.

The blog reports of this scandal, couldn't be certainly complete, as they had a twist, which basically suggested that,

after years of hosting a viral content creation radio show, which centred on promoting Christianity and ‘exposing’ the occult, as many people who passed through his show, talked about how they fell into occultism until God saved them, he himself, may have now been a tool in the devils hands and rather defrauded fellow believers in God.

This was because, he ALLEGEDLY raised over $500,000 from a group of Ghanaians who paid up, to participate in a tourism visit to Dubai, he had organized,, but after raising the cash their travel plans never materialized and hence, was accused of duping a group of Ghanaians out of the whooping $500,000.

Interestingly however, when he spoke to the scandal for the first time on his new radio station Kingdom Plus, Sarfoh claims that he was duped as well by a well known friend. He claims a lady preacher friend came to him with an opportunity to help people travel to Dubai for work.

His trust in her led to him agreeing to find people for the trip and raise money from them and after raising the cash, he handed it over to his lady friend.

The lady friend then disappeared with the cash which led to people accusing him of fraud, as Rev. Sarfoh says he has been trying to raise money to pay back the victims since then, which has seen him sold off his cars, houses and other properties to be able to pay back the debt.

Nana Yaw Sarfoh would go on, to express disappointment with some pastors who refused to show up during these hard time, as he is on a sure journey, to come back up and be free from this nose-diving moments, in his rollercoaster life, and as believe, we can all, do the needful and support him and his estranged wife, in these hard times, for God's peace, to overwhelm them and cause God's will, to come to ass, at all cost INDEED.

On his new sow at Kingdom Plus FM, he has taken his innovative ideas to a while new level, and currently hosts his show, live from various market squares, where hundreds gather around him, to hear powerful words of inspiration and the gospel.

He is indeed, on a journey, to make his new station, largely unknown, as the next superstar radio station in the country, or should I say, in the greater Accra region, at least. 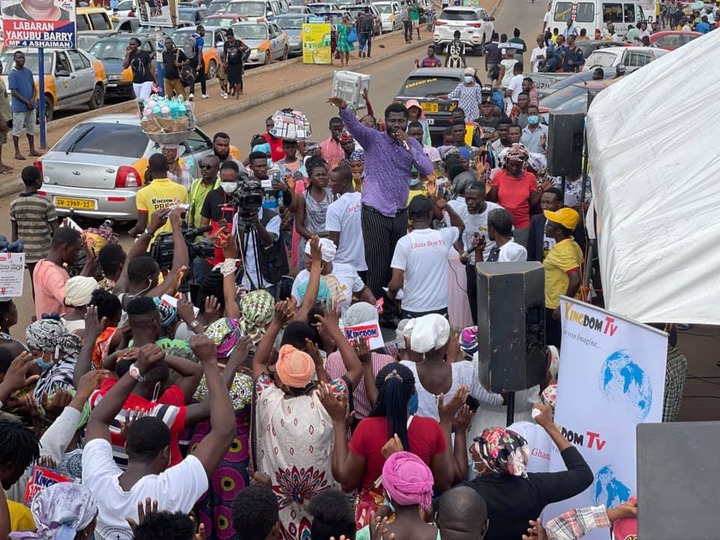 Rev. Sarfoh, preaching just this week at the Kaneshi Market