By Dolaw (self media writer) | 6 months ago

The Founder of the Glorious Word International Ministry, Reverend Isaac Owusu Bempah, has stated that no one can be president in Ghana without his knowledge.

According to the Ghanaian prophet, many have been touted as controversial; as of now, God has already revealed to him the winner of the 2024 general Presidential elections of Ghana. Rev. Owusu Bempah stresses that some people see him as politically affiliated, but he has not declared his support for anyone.

He explained that he is a mouthpiece of God and says what he has seen and that at the moment, God has already spoken to him about who will lead the country after the next general elections.

However, he noted that his revelation came with some scary incidents at the Jubilee House and therefore has treated all deliver in the country to rise and pray for mother Ghana so that the results of the elections will not threaten the pitch of the country.

Rev. Owusu Bempah further noted that elections have led to worse situations like wars in many other countries, and therefore, what he is saying should not be taken for granted or be taken as a threat to the security of the nation. He said he had spoken it boldly because he wanted all Christians to join hands and pray to avert it. He also stressed that he was not forcing anyone to believe what he said and that he had broken the mind of God.

"I have not declared my support for anyone. I have seen something and know the winner, but I won’t say it. I know the person who’ll win the 2024 elections, but I will not say it. I will meet the person and tell him. You can choose to believe it or not, but no one can be president without my knowledge,” he stated. 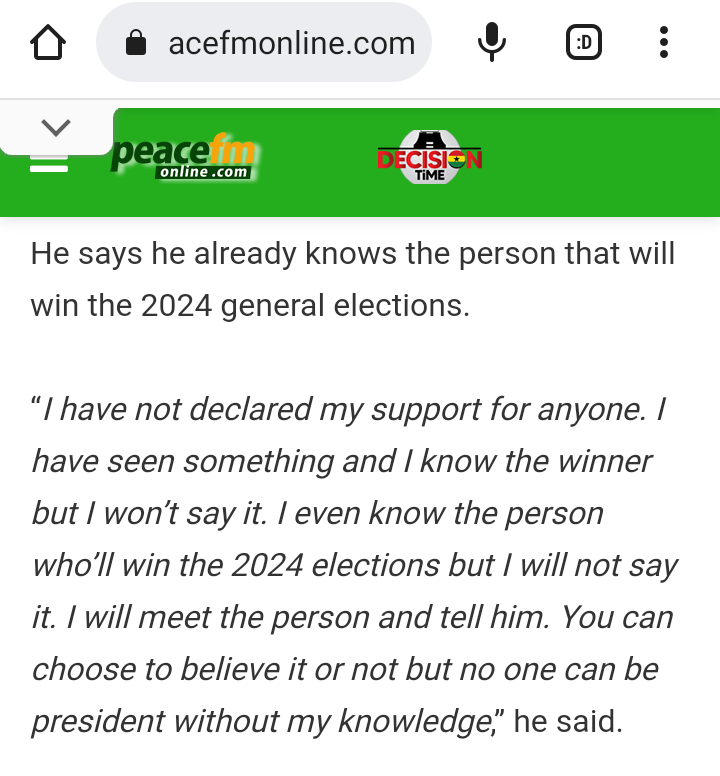