One of 6 Pastors, Who Have An Issue With Bishop Dag In Court, SHADES Bishop Dag, In His Viral Post.

By TommyO'Dell (self media writer) | 3 months ago 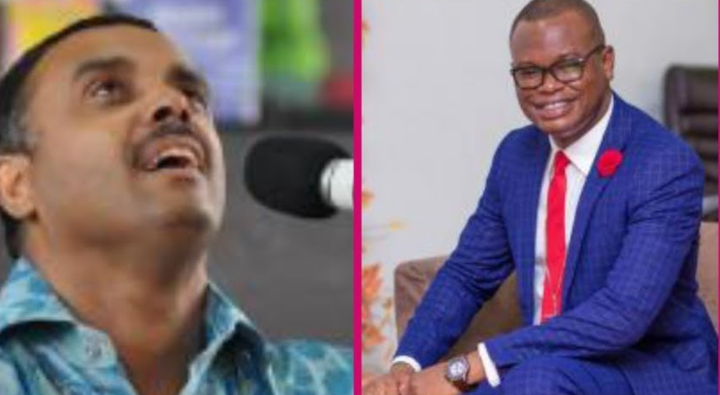 Bishop Dag Heward Mills, trained as a Medical Doctor and for the past few years, at most, in 3 decades, he has been blessed to sheered a big ministry, which started very small at the University of Ghana Medical School, which targeted nursing students, that has about 13 individual church denominations and are scattered around the world in over 92 countries.

This means that, his over 6,070 churches have all been planted from his first church at the medical School at Korle Bu, where he would graduate on top of the class and receive award as two of best graduating students, only to abandon his potentially promising medical career, just after his housemanship and give himself wholly to the ministry.

Most recently however, he may have been in the news, for the wrong reasons, as six (6) of his pastors, had resigned and lead a form of counter attack, against him, accusing him of not paying their SSNIT benefits, for which reason, they are still in court.

Well, one of such, was Bishop Oko Mensah, who became a pastor and eventually ne of the youngest Bishop's of the Lighthouse Church and in fact, one who now pastored one of the main churches at Qodesh, where Bishop Dag, had severally ministered from, as the church's headhunters, until he moved on, to start the First Love Church and created other 6 church denominations, with each, boasting of its international headquarters.

So how is it possible that, "a younger Bishop, who stood on the main pulpit that his spiritual father stood on, ceremonially for years, and ministered to his sheep's, finally turn around and leave him painfully and also, yet still, be at the center of a controversy, which will rock his former church big? Well, the answer, is in this next picture, kindly observe it carefully: 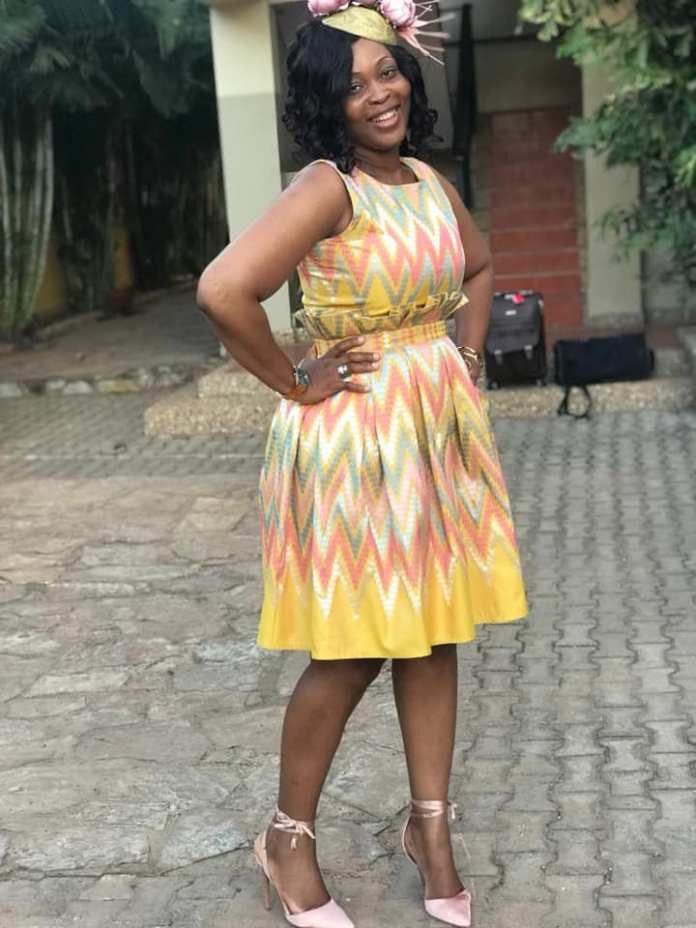 Aside the myriad of reasons, why he resigned, he was emphatic that, the lady above, his wife, was probably, the main reason. As according to him, besides the chaotic work schedules which took a toll on his marriage, Bishop Oko Mensah assert that, his superiors in the ministry made him feel that his wife, who sometimes complained about the toll of his work on the marriage, was evil. He believe that, he was made to understand that the woman was working against his ministry, and with time, he began to believe it and it showed in how he treated her.

So, when she rejected the birthday gift, he felt some of the things she had heard about her were manifesting and he went to meet Bishop Dag Heward-Mills about it. In his writ, therefore filed at the Accra High Court, Bishop Oko Mensah accused Presiding Bishop Dag Heward-Mills that, he was “unduly pressured by the Founder of the Defendant church to divorce his wife because she was perceived to be a stumbling block” to his [Bishop Oko Mensah’s] ministry, as was widely reported by renowned The Fourth Estate.

When his wife rejected the birthday gift and he went to meet Dag Heward-Mills at the church premises, Oko Mensah says the presiding bishop asked him to divorce her. 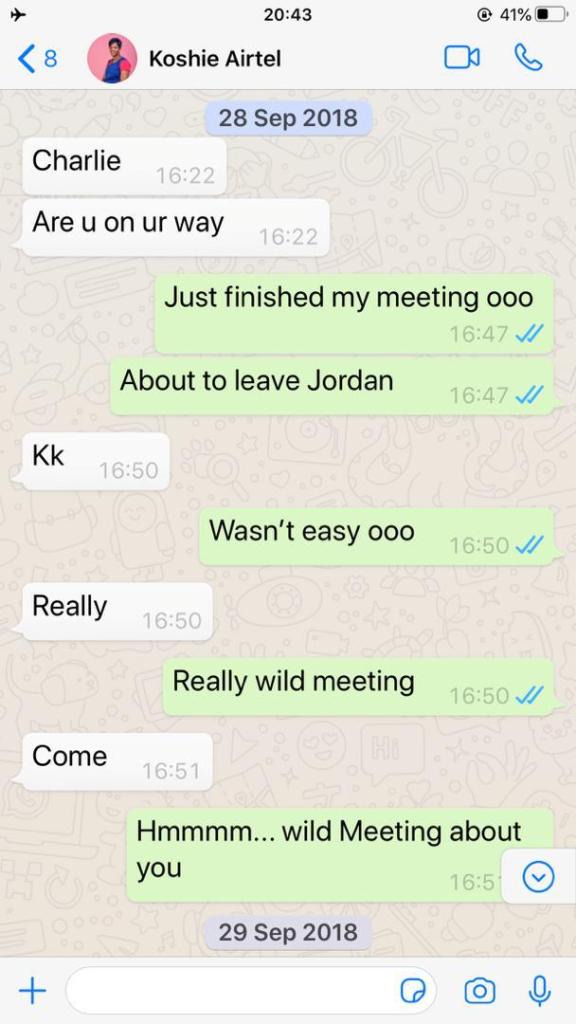 A screenshot he shared with The Fourth Estate, to authenticate his assertion

In another instance, he shared what he called, an embarrassing situation (in his interaction with the Fourth Estate, who broke the story), he faced at a staff meeting held in Mampong in the Eastern Region and attended by university students who are members of the church as well as other pastors and bishops. It was there that Bishop Oko Mensah says the harassment and abuse went a notch higher.

“He [Dag Heward-Mills] turned to me angrily and shouted, ‘You, you are weak. You are weak. Even the woman you have gone to marry, one day, when you leave her, she will come crying to Bishop Sackey.’’

Well fast forward, in a post on Facebook, I have sighted this post by Bishop Oko Mensah, where he indirectly shades his spiritual father and his former church and writes that:

Some people are more concerned and worried about the image of a thing than it’s state. They hush every discussion about it and suggest “solutions” that would never work. They only act and “move” when things are LOOKING BAD, not when things are GETTING BAD. 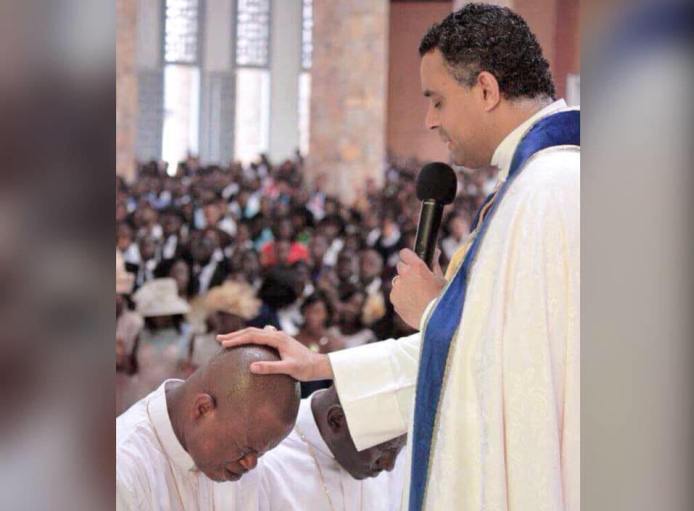 Bishop Oko, when he was ordained as Bishop by his spiritual father then, Bishop Dag.

They would tell you not to “wash our dirty linen in public”, and go away without offering soap, water, washing machines or helpers. That is why things get worse, … and worse … until they get horribly disgraceful and shamefully disgusting… and THEY STILL REACT ONLY TO HOW THINGS ARE LOOKING!!

We have a choice, between working on the state of things and working on how things look. In the Bible, God does not hide the faults and weaknesses of His servants. They are not great because we don’t know their faults or weaknesses. God’s servants are great ONLY because of humility, obedience, love and repentance (not numbers/crowds, miracles, books and buildings). IT HAS NOT CHANGED. IT WILL NOT CHANGE.

The rot cannot be dealt with with PR and plain lies (oh how we pastors/churches can lie now!). It stinks so much… and we’re deceiving no one. The preoccupation with image is destroying the church, and it’s so obvious. We fight and crush anything that shows our leaders are human. Isn’t it because some of our churches (especially Charismatic churches) are NOT built on Christ, but on men, men we practically worship.

Because they are built on these men, anything that affects the images of these men hit the church hard. We want to see them not as God’s servants, but as God. We get worried when it is becoming obvious they are not God. Let’s get real and deal with the state of the church, its members and its leaders. Some people can be saved. Let’s treat the illness with God’s word, not with our predominantly African perspectives," he wrote.

Comments, following his post have been just these few: 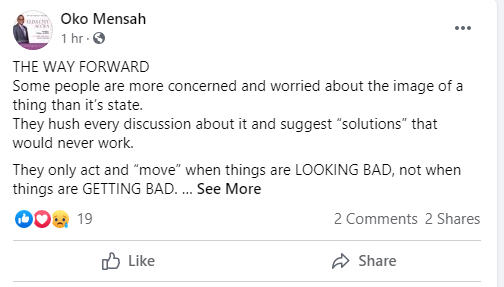