By DCKWAMEKWAKYE (self meida writer) | 23 days 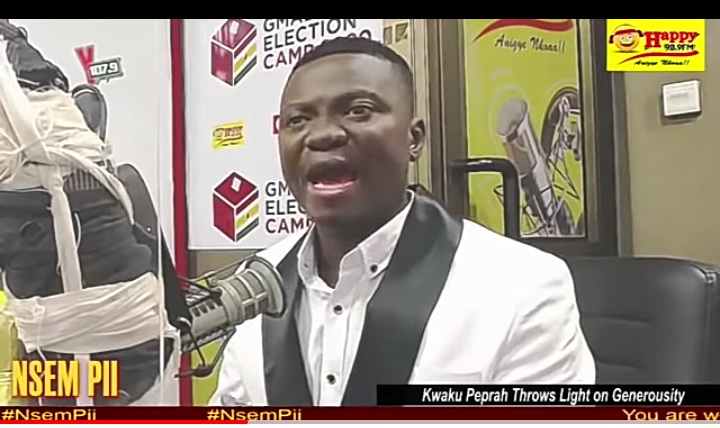 Nana Kwaku Peprah who is also commonly called Quotation Master or Lucifer or Ayaaba has revealed the secrets about how to successful, rich and receive God's blessings.

He shared that, one secret to becoming successful in life is to learn the art of giving to the less privileged in society.

The African Traditional Spiritualist, Teacher and Advocate noted that, it is not just giving for giving sake but giving to the downtrodden in society is what brings blessings to the giver.

He added, giving is a spiritual requirement that compels the heavens to release blessings but giving to able bodied people doesn't guarantee blessings but to those who have disabilities or those who are poor is what brings blessings.

According to him, those with disabilities and the less privileged cannot fend for themselves and it is incumbent on those who have to assist such people.

Again he underscored that, giving to able bodied people is not just a waste of resources but does not guarantee the giver any blessings from God. He added such people can work and fend for themselves but if they are lazy and are unwilling to work, one should not waste his energy giving to such people.

Indeed, one observation I have made in life is that, normally when people are given spiritual directions to perform which includes giving of alms, your directed to give to beggars you find along the street.

It is understood that spiritually when such things are done it compels the spirits to grant you your heart request.

However, he explained that one can give to a friend who is in need and that is good because, in life everybody needs somebody at a particular point in time. Once you offer assistance to someone, someone else would also help you when in need. That is how life works.

This is akin to law of cause and effect. Thus, as a man soweth so shall also reap. So once you do good, you shall be rewarded with good also.

But, if one desires to receive blessings from God through the art of alms giving then purposefully first, give to orphans, second to widows or widowers, third to cripples and fourth to those who are visually impaired.

"These are the people God wants to feed but he cannot physically do it. So if you decide to give a portion of your hard earned income to those less privileged in society, God shall bless you. God sees you as doing what pleases him and He shall lift you up so that when you earn more, you can do more" he stated.

Speaking to Rev. Nyansa Boakwa on Happy FM's 'Nsem Pii' show on the topic "Generosity and It's Spiritual Implications", Ayaaba revealed further that, spirits are servants to humans but once they serve you, you must also give them something in return.

In ending the conversation, Nana Kwaku Peprah counseled listeners of the show that, being generous and alms giving is good.

"It helps to move people from one stage in life to another but, you must know who to give to.

If you yearn to receive blessings from God in order to be lifted from one stage in life to another, give to the less privileged in society" he ended.