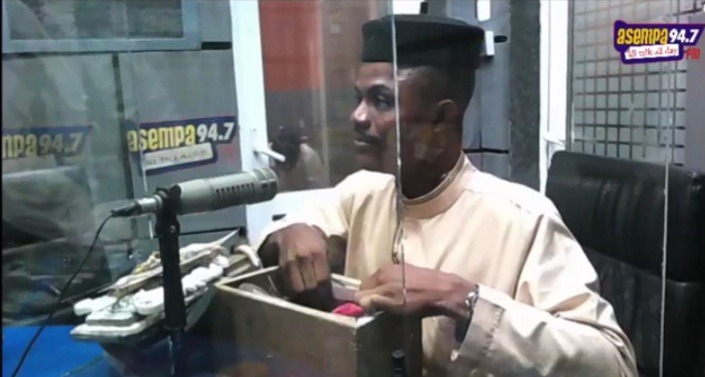 A 33 years old man named Richard Allotey from James Town shares his story with Asempa Fm concerning what he has been experiencing that made him to decides to be a Christian. The man shares that when his parents gave birth to him, his used to behave in an unusual manner compared to the other children, his parents became terrified so they sent him to stay with his grandmother.

The man said he was raised in a Christian home but his behaviour was different, he always fight with his colleagues at school. He continued that when he was 15 years old, one of his friends, asked him to accompany him to a fetish priest but he didn't reveal the actual purpose he was going to the shrine. When they got to the shrine, he was told to sit outside whilst his friend entered the shrine to meet the fetish priest.

Richard again said he became curious and decided to find out what they were doing, he looked through the small holes on the shrine and saw the priest performing rituals for his friend, at that moment the fetish priest saw him and asked him to join them. Richard continued that he told the fetish priest he too wants to be more powerful so he should allow him to join them.

He then asked him if he is brave enough to perform all the rituals, and Richard accepted to go through all the procedures. When they came back home, he became more notorious than before. After he completed school, they again went to Benin to another fetish priest who initiated them into the smaller gods' worship. Richard came back and he became a fetish priest, lots of people came to his shrine to help them to get a good marriage.

Some people too come medicine which will attract more ladies. He continued that some of them also come to his shrine to get good work and a whole lots. Richard again said he has been having bad dreams and seeing unusual things what he has been doing. This condition has made him to decide to stop the fetish priest work, repent from all deeds and become a Christian.

British High Commissioner to Ghana Given a Wonderful Local Name

#Fix Agradaa: Ghanaian all set to hit the street for a demonstration against Nana Agradaa