T. B Joshua's Wife Shares Minute By Minute Account of How Her Husband Died With The Media

By MrsCelestial (self meida writer) | 4 days

Thousands of people in Europe, around Africa and the world, have traveled to Nigeria to meet Prophet T. B Joshua at his famous Synagogue Church of All Nations (SCOAN), a place, well noted for power and generosity.

If there is a pastor on Planet Earth, who has had to spend more time, literally praying for hundreds of people in a single service and even more interestingly, doing this for years, then Prophet T. B Joshua, is unarguably, one of three. 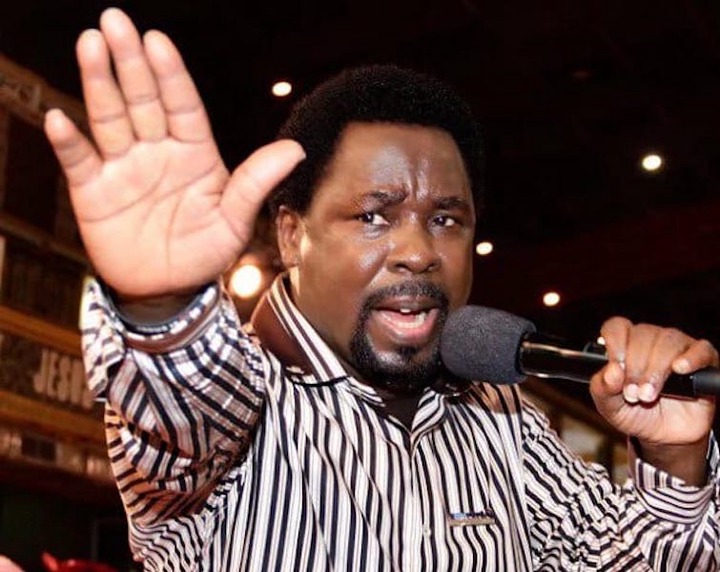 In fact, from videos circulating online, Prophet T. B Joshua ministered powerfully to hundreds of such people at his prayer camp at on his prayer mountain, and to think that, rumours have it that, he had suffered from stroke two months ago, may be it times for us all to appreciate the fact that, he was indeed a man full of power.

To the doubters, I will just ask one question. If you ever know anyone who suffered from any form of stroke and as the rumours have it, had to be flown to Turkey, just to receive medical help, and in less than the same two months, literally walking about and spending at least 2minutes on even 300people, you must believe that, something happened, that was not just natural.

And that is where this write up is one interesting one, as I have chanced on a vivid account from his bossom wife, known as Mrs. Evelyn Joshua, who despite been seen fewer times beside the husband on pulpit, has been a solid pillar behind her powerful husband, who now rests in the Lords bossom. 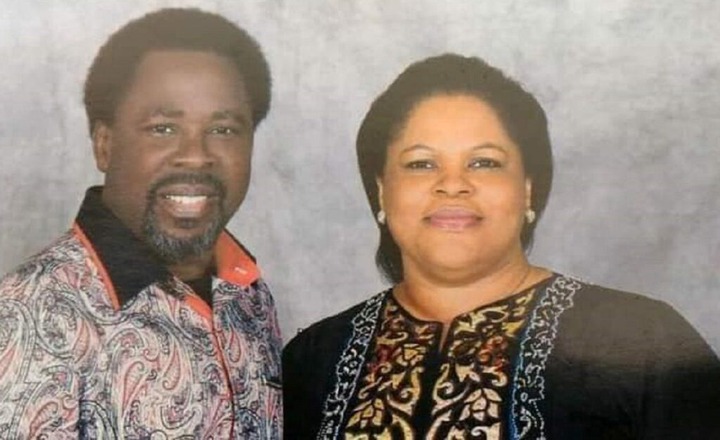 Evelyn had confirmed earlier, his passing, when she tweeted that: "Losing a loved one is never easy; whether sudden or foreseen it’s always heartbreaking. Grief can wreak havoc on our overall well being. That’s why it’s important to stay rooted to the Almighty. Only He can lessen our heartache and comfort us in these times. Seek refuge in Him."

Also, in the Facebook post, by a renowned media organization, it shares this important account of the wife, who shared minute by minute account of how the famous prophet of God, finally passed on. Writing on the topic "How my husband died - Evelyn, wife of Prophet T.B Joshua," it stated that:

“He ended the race prayerfully. He spent about three hours in prayers before the last service on the mountain and was looking very healthy. He never showed any sign of illness or worry... Afterward, he came up to shower. Few Minutes later, he stepped out for ministrations. While ministering, he spoke about a time to come and time to leave.

"His statements were spiritual and suddenly, he left the stage and went to his inner chambers. I waited a few minutes and thereafter I decided to check on him. I met him sitting on the chair like someone reflecting but unconscious. His disciples came and tried to revive him to no avail. Of a truth, he went home to be with the Lord and left us with a message, watch and pray.” 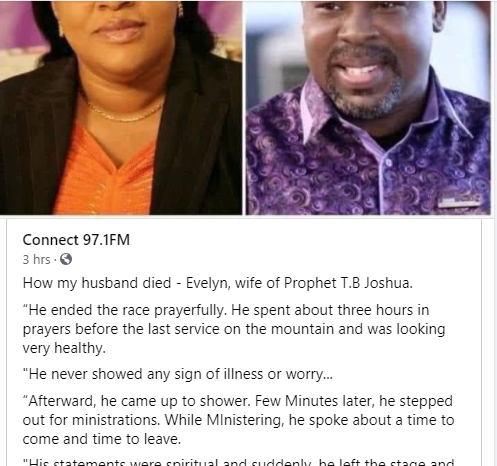 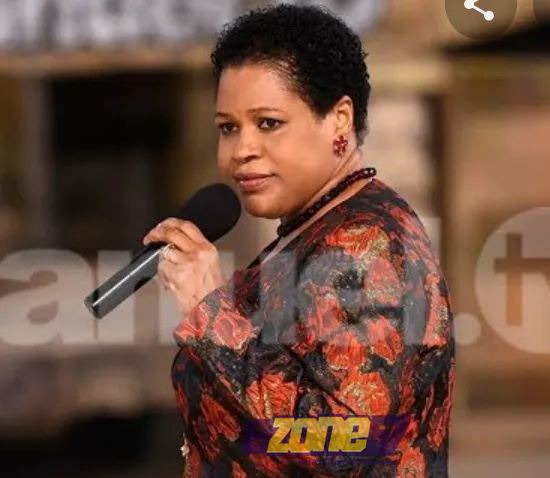 This can only be clear indications that, some people's fear that, he may have landed in hell or was a fake prophet, may need the change of their unbelieving and doubts filled minds.

Rest on Papa T. B Joshua. Your impact has been well felt. May your God, help us to serve God in joy, love and power also. Amen.

Some few facts about her wife. She had a twin brother, but he passed on earlier in life and was working at the Nigerian Distilleries in Ota, Ogun State, when she met TB Joshua.

In 1990, Evelyn travelled to Egbe to visit her sister, and while there, she "met the then-vibrant Pastor TB Joshua, who was five years older than her, where "she had gone to meet him for counselling and spiritual guidance". But, by the end of the 45-minute-long session the pastor was smitten, and asked her to marry him on that same day.

She recalled: "We were just looking at each other until he, at a time, wrote my name on the piece of paper. So, we started talking. He told me a lot of things about myself, both things that I knew, and those that I never knew. I was shocked. He told me about my family, about my past, my present and my future. Altogether, we spent about 45 minutes."

This means that, they have been married for 31 years until his death on June 5, 2021 and were blessed with three children - all daughters. Serah, is the eldest of the three daughters, a law graduate from the London School of Economics and is currently pursuing her PhD. Serah was admitted to the bar in Nigeria as a legal practitioner in December 2015. 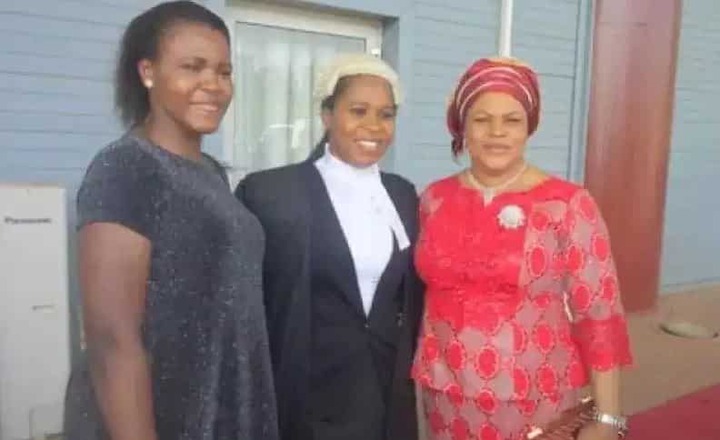