As the saying goes always , wonders shall never end, the earth is full of suprises which some of them are beyond human understanding .

In this article , we will discuss some wonderful facts which will make all readers explore much more about the world we are leaving.

-Statue of Zeus at Olympia 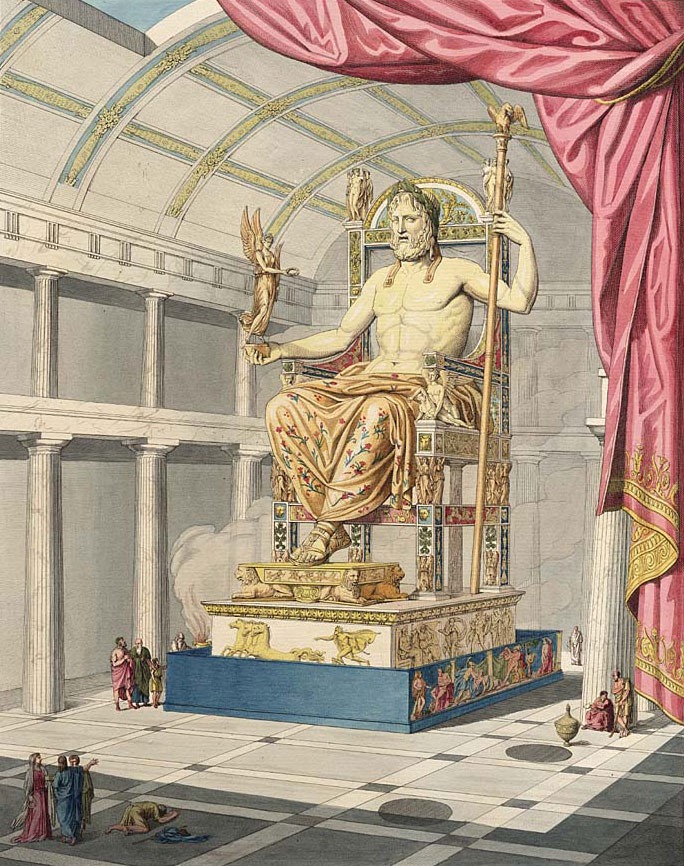 The Statue of Zeus at Olympia was created by the great Greek sculptor Phidias (known as the finest sculptor of the ancient world in the 5th century BCE, he also worked on the Parthenon and the statue of Athena there in Athens). The statue depicted the god Zeus seated on his throne, his skin of ivory and robes of hammered gold, and was 40 feet (12 m) tall, designed to inspire awe in the worshippers who came to the Temple of Zeus at Olympia. Not everyone was awestruck by the giant statue, however. Strabo reports:

Although the temple itself is very large, the sculptor is criticized for not having appreciated the correct proportions. He has shown Zeus seated, but with the head almost touching the ceiling, so that we have the impression that if Zeus moved to stand up he would unroof the temple. (Seven Wonders)

The Temple at Olympia fell into ruin after the rise of Christianity and the ban on the Olympic Games as 'pagan rites'. The statue was carried off to Constantinople where it was later destroyed, sometime in either the 5th or 6th centuries CE, by an earthquake.

-Temple of Artemis at Ephesus 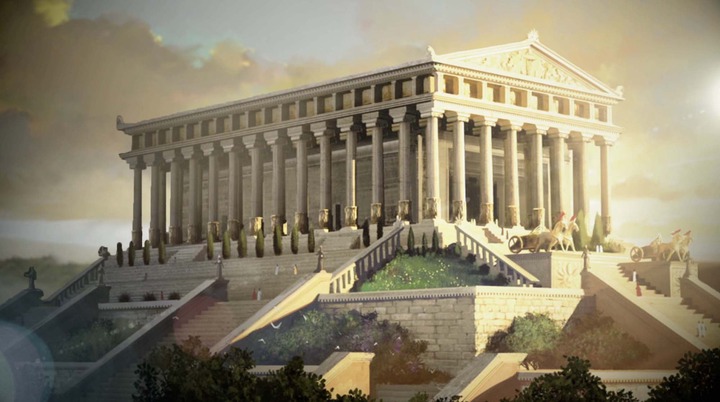 The Temple of Artemis at Ephesus (Ephesos), a Greek colony in Asia Minor, took over 120 years to build and only one night to destroy. Completed in 550 BCE, the temple was 425 feet (about 129 m) long, 225 feet (almost 69 m) wide, supported by 127 60-foot (about 18 m) high columns. Sponsored by the wealthy King Croesus of Lydia, who spared no expense in anything he did (according to Herodotus, among others) the temple dedicated to the Greek goddess Artemis was so magnificent that every account of it is written with the same tone of awe and each agrees with the other that this was among the most amazing structures ever raised by humans. On July 21, 356 BCE a man named Herostratus set fire to the temple in order, as he said, to achieve lasting fame by forever being associated with the destruction of something so beautiful. The Ephesians decreed that his name should never be recorded nor remembered, but Strabo set it down as a point of interest in the history of the temple. On the same night the temple burned, Alexander the Great was born and, later, offered to rebuild the ruined temple, but the Ephesians refused his generosity. It was rebuilt on a less grand scale after Alexander's death but was destroyed by the invasion of the Goths. Rebuilt again, it was finally destroyed utterly by a Christian mob lead by Saint John Chrysostom in 401 CE. 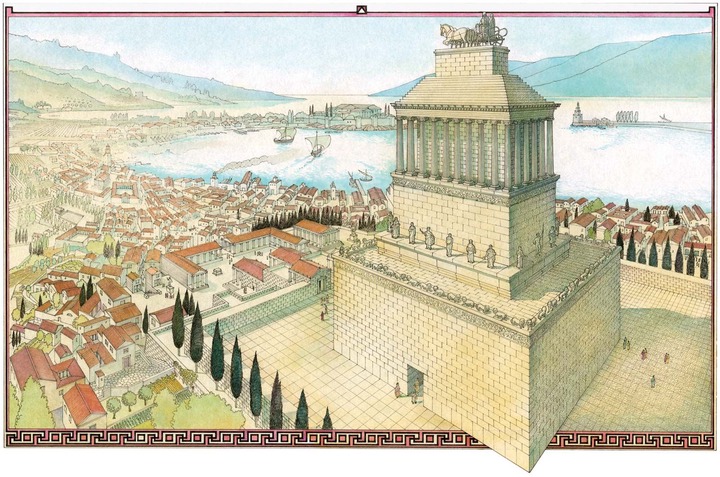 The Mausoleum at Halicarnassus was the tomb of the Persian Satrap Mausolus, built c. 351 BCE. Mausolus chose Halicarnassus (Bodrum in modern-day Turkey) as his capital city, and he and his beloved wife Artemisia went to great lengths to create a city whose beauty would be unmatched in the world. Mausolus died in 353 BCE, and Artemisia wished to create a final resting place worthy of such a great king. Artemisia died two years after Mausolus and her ashes were entombed with his in the mausoleum (Pliny the Elder records that the craftsmen continued work on the structure after her death, both as a tribute to their patroness and knowing the work would bring them lasting fame). The tomb was 135 feet (41 m) tall and ornately decorated with fine sculpture. It was destroyed by a series of earthquakes and lay in ruin for hundreds of years until, in 1494 CE, it was completely dismantled and used by the Knights of St. John of Malta in the building of their castle at Bodrum (where the ancient stone blocks can still be seen today). It is from the tomb of Mausolus that the English word 'mausoleum' is derived. 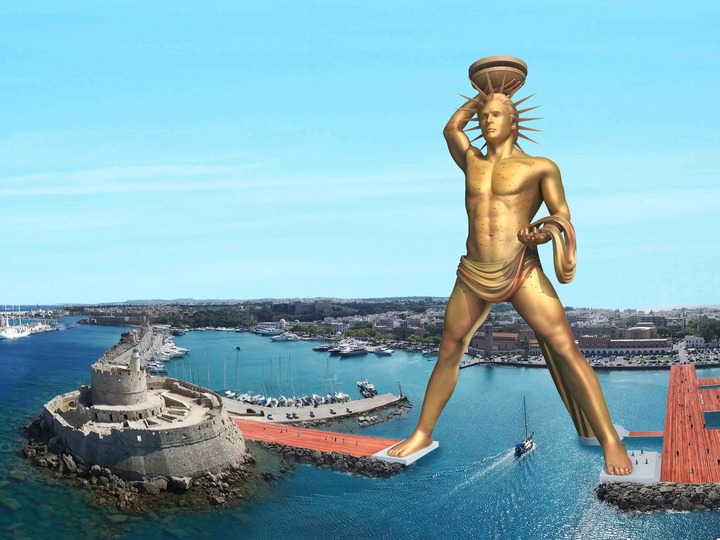 The Colossus of Rhodes was a statue of the god Helios (the patron god of the island of Rhodes) constructed between 292 and 280 BCE. It stood over 110 feet (just over 33 m) high, overlooking the busy harbor of Rhodes and, despite fanciful depictions to the contrary, stood with its legs together on a base (much like the Statue of Liberty in the harbor off New York City in the United States of America, which is modeled on the Colossus) and did not straddle the harbour. The statue was commissioned after the defeat of the invading army of Demetrius in 304 BCE. Demetrius left behind much of his siege equipment and weaponry, and this was sold by the Rhodians for 300 talents (approximately 360 million US dollars) which money they used to build the Colossus. The statue stood for only 56 years before it was destroyed by an earthquake in 226 BCE. It lay in impressive ruin for over 800 years, according to Strabo, and was still a tourist attraction. Pliny the Elder claims that the fingers of the Colossus were larger than most statues of his day. According to the historian Theophanes, the bronze ruins were eventually sold to “a Jewish merchant of Edessa” around 654 CE who carried them away on 900 camels to be melted down. 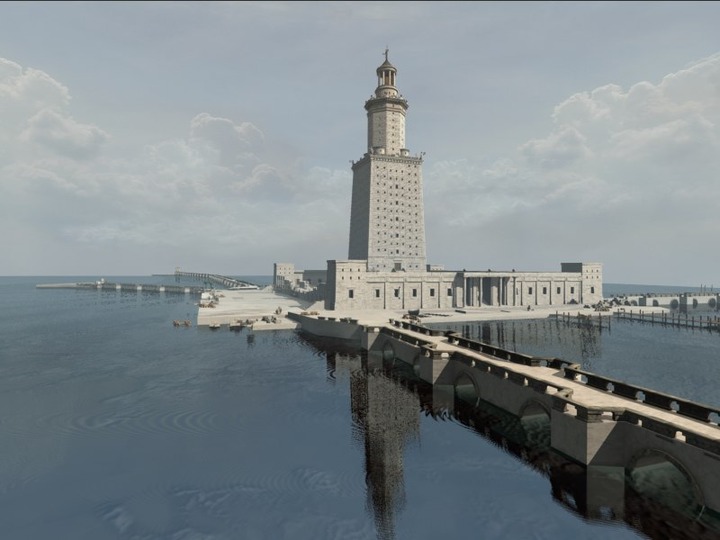 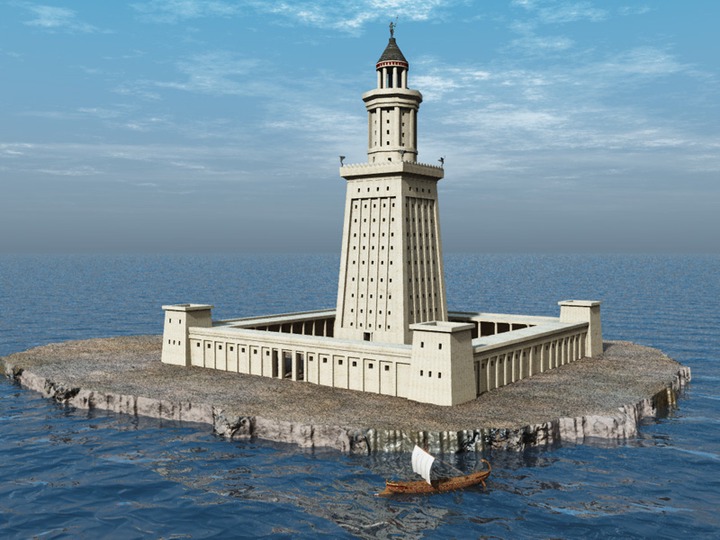 The Lighthouse at Alexandria, built on the island of Pharos, stood close to 440 feet (134 m) in height and was commissioned by Ptolemy I Soter. Construction was completed sometime around 280 BCE under the reign of Ptolemy II Philadelphus. The lighthouse was the third tallest human-made structure in the world (after the pyramids), and its light (a mirror which reflected the sun's rays by day and a fire by night) could be seen as far as 35 miles out to sea. The structure rose from a square base to a middle octagonal section up to a circular top and those who saw it in its glory reported that words were inadequate to describe its beauty. The lighthouse was badly damaged in an earthquake in 956 CE, again in 1303 CE and 1323 CE and, by the year 1480 CE, it was gone. The Egyptian fort Quaitbey now stands on the site of the Pharos, built with some of the stones from the ruins of the lighthouse.