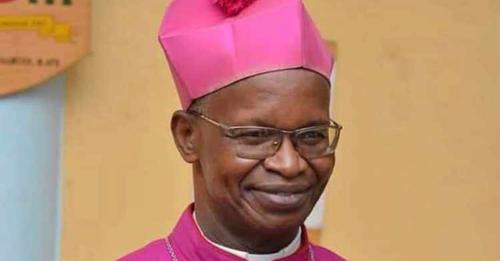 This was announced in a communique by André-Léon Simonart, Secretary General of the African Missionary on Sunday.

Cardinal Baawobr died in Rome on Sunday, November 27 a few minutes after he was taken in an ambulance to a hospital in the evening.

“With sadness and in pain, we hereby inform you of the return to the heavenly Father, of Cardinal Richard Bawoobr which occurred today, Sunday, November 27, 2022”, the statement said.

It added, “our prayer and our thoughts go also to his family, to his diocese, his fellow bishops, to all his friends and acquaintances. 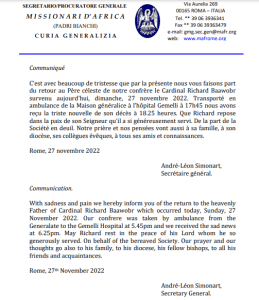 Until his death, Cardinal Baawobr was a Ghanaian prelate of the Catholic Church and bishop of Wa in Ghana.

On August 27 this year when he was being created a Cardinal, Cardinal Baawobr was absent. He was reported ill and hospitalised.

On the said day, Pope Francis ended his homily by asking for prayers for Baawobr.

Richard Kuuia Baawobr was born on June 21, 1959, in Tom-Zendagangn, in the Nandom District of Ghana.

He attended St. Francis Xavier Minor Seminary, and Nandom Secondary School and later He entered the St. Victor major seminary in Tamale in 1979 for his philosophical studies.

In 1981 he joined the Society of Missionaries of Africa and continued his preparation for the priesthood. From 1981 to 1982 he fulfilled his novitiate in Friborg, Switzerland. From 1982 to 1987, he completed his theological studies at the Missionary Institute London

On 17 February 2016, Pope Francis appointed him bishop of Wa in Ghana.