Famadihana is a funerary tradition of the Malagasy people in Madagascar. During this ceremony, known as the turning of the bones, people bring forth the bodies of their ancestors from the family crypts, re-wrap the corpses in fresh cloth, and rewrite their names on the cloth so they will always be remembered. Then they dance to live music while carrying the corpses over their heads and go around the tomb before returning the corpses to the family tomb. They believe in celebrating the life lived by the dead person. 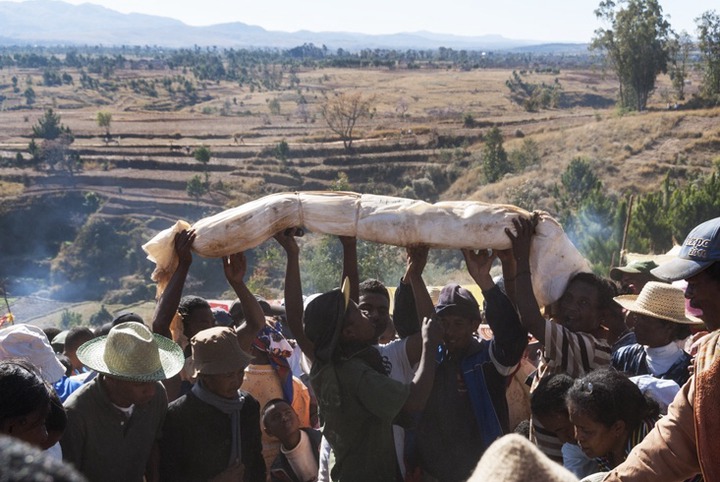 Famadihana appears to be a custom of somewhat recent origin, perhaps only since the 17th century in its present form, although it may be an adaptation of premodern double funeral customs from Southeast Asia. The custom is based upon a belief that the spirits of the dead finally join the world of the ancestors after the body's complete decomposition and appropriate ceremonies, which may take many years. In Madagascar, this became a regular ritual usually once every seven years, and the custom brings together extended families in celebrations of kinship, sometimes even those with troubled relations.

The practice of Famadihana is on the decline due to the expense of silk shrouds and belief by some Malagasy that the practice is outdated. Early missionaries discouraged the practice, and Evangelical Christian Malagasy have abandoned the practice in increasing numbers. The Catholic Church, however, no longer objects to the practice, because it regards Famadihana as purely cultural rather than religious. As one Malagasy man explained, "It's important because it's our way of respecting the dead. It is also a chance for the whole family, from across the country, to come together." 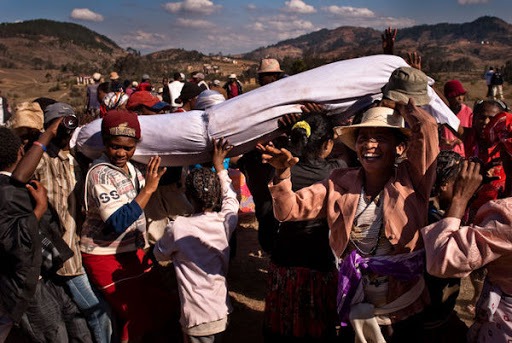 Additionally, the practice of Famadihana is thought to be connected to pneumonia plague transmission in the region. The Malagasy government has issued rulings forbidding the practice for individuals who died of the plague, but there have been reports of people ignoring this decree.

According to Malagasy belief, man is not made of earth but the ancestral bodies. And according to faith, the ancestors have not left the world of the living before their bodies are completely decomposed. Until then, it is possible to communicate with the dead, who are treated with great respect and love at the famadihana ritual. During the ritual, the families thank their ancestors and tell them how it goes in the world of the living. The ancestors are also asked for good health or a good harvest. 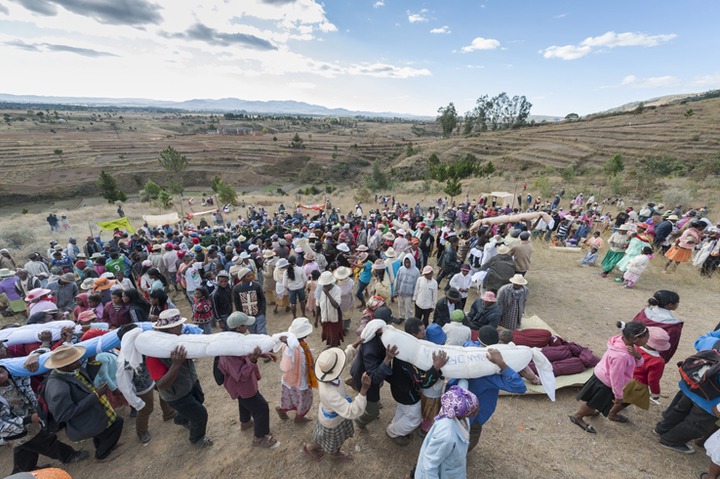 In every seventh year, the family graves are opened and the dead are carried out in the open where they are honored and wrapped in new silk. After that, the families dance around the grave with their ancestors before they are put back.

The ritual is threatened because of increased poverty, rising prices of silk, plague, and, not least, the Christian Protestant church that does not approve of the ritual. The Catholic Church regards the ritual as a cultural-born phenomenon and is, therefore, a friendlier set.

The Famadihana ritual is most likely from Indonesia and has been brought to Madagascar via migration by the sea.

A family member who died in between two Famadihanas was buried temporarily in a coffin and is honoured at the Famadihana before he is wrapped in silk.

It is not customary to show emotions during the Famadihanas, but sometimes holding back tears is not an option.

After dancing with the ancestors, they are put back into the grave.