10 Things That Are Restricted In Saudi Arabia.

By Abdul_Razak (self media writer) | 1 year ago 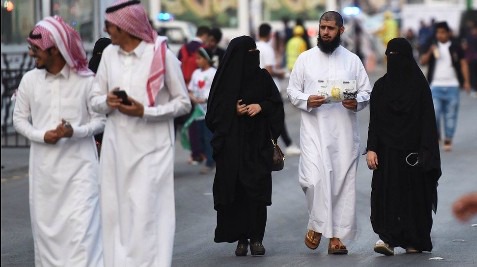 Saudi Arabia, considered to be the World’s Last Forbidden Kingdom, has a set of specific laws to govern its people. The basis for Saudi Arabia’s constitution is their religion, Islam, and the Holy Book Quran. The government tends to decide the legality of actions based on the Islamic law or on the basis of whether or not it will lead people away from Islam. The strictness of Saudi Arabia’s laws also varies based on an individual's gender, as gender roles are very distinct in Saudi Arabian culture and society.

Women in Saudi Arabia are generally not allowed to travel alone or without an electronic authorization, until they reach the age of 45. However, male family members have become increasingly more lenient recently, allowing their female family members to travel alone more frequently. Although, most males still forbid women from independently traveling, because according to Islam, this can lead to immorality. This law obviously varies for female foreign teachers who choose to teach in Saudi Arabia without their partner or male family members, but be sure to ask your school or placement provider how you should navigate the country as a solo female teacher.

Females are not allowed to drive in Saudi Arabia; this is one of the most notorious bans related to women in Saudi Arabia. This law attempts to prevent women from leaving their houses without the accompaniment of their spouse or male family member (see #1), and avoid the potential for them encountering unrelated males without their own male family members or from getting into situations where they would have to uncover their face. However, in some cases, women are permitted to drive in the desert areas outside of any major cities or within private compounds.

Women are not permitted to work in specific jobs in Saudi Arabia, especially those that men traditionally carry out. Education or medical fields are the most common fields that women are permitted to work in. Hence, opportunities to teach English in Saudi Arabia are typically open to both women and men. Although, more recently, women have begun working as store clerks in department stores or at grocery checkout counters. Regardless of the type of employment they pursue, women are always required to cover their faces during working hours.

4. Public Displays of Religious Beliefs - for all religions.

Non-Muslims are not allowed to worship in public in Saudi Arabia, and there are not many (if any) non-Muslim places of worship in major cities throughout the country. This law also includes promotion or display of personal religious items, like religious books and symbols (i.e. the crucifix). Since Saudi Arabia follows the beliefs of Islam, this law attempts to prevent non-Muslims from trying to convert or share religious ideas with Muslims. Consequently, Muslims who wish to convert to other religions are not necessarily openly supported by their family members or society at large. But, as in most cases, as time passes, more and more Saudi Arabians are becoming open to other religions. You don't have to be Muslim to teach in Saudi Arabia, but you should respect their beliefs and be willing to keep your own more private during your teaching stint.

Most private gyms do not accept women members and the majority of schools do not offer gym classes or physical education activities for female students. This is because women are not permitted to carry out physical education and sports, as these are activities believed to be reserved solely for men. It is best for foreign teachers to respect this law during their time in Saudi Arabia, and of course, don't expect to teach P.E. if you are a female.

Saudi Arabia has an active music industry, but you won’t hear any music played in malls, department stores, and grocery stores for the most part. Also, music classes are not allowed in public schools, because music is considered forbidden since school curricula must follow the rules of Islam (Don't expect many opportunities to teach music in Saudi Arabia to pop up!). Despite this, rock bands and music enthusiasts still find ways to express their passion for music, away from the public eye. If you have a passion for music, you may just have to dig a little deeper to find those who share your interests.

All Muslims, under Islamic law, are not allowed to eat pork. Saudi’s expect non-Muslim foreign teachers to abide by this law while teaching in Saudi Arabia too, regardless of their own religious beliefs. It won't be too hard to follow this law though, as generally only “Halal” foods are allowed to enter the country.

Unfortunately for movie lovers, movie theaters are near nonexistent in Saudi Arabia, except in private residential camps. Movie theaters are a no-no for those devoted to Islam, as it supports the unsupervised mingling of men and women, which Muslims believe may lead to immoral actions outside of marriage. With this in mind, many Saudis who live close to the island of Bahrain drive to the island on weekends to enjoy a movie, so if you need a movie fix while teaching in Saudi Arabia, you will have options still.

9. Intermingling of the Sexes.

Similarly to #8, males and females are not allowed to mingle at malls or restaurants, unless they are family members. Also, a lone man or a group of guys will not be allowed to enter a mall unless there is a woman with them. Some restaurants are even divided into two sections, one for single individuals of either gender and the other for families. Although most non-Muslim expats or westerners will be excluded from this cultural practice, you should still be aware of why and how these social situations work in Saudi Arabia.

Valentine’s day is not celebrated and individuals are prohibited from wearing or selling anything red on the 14th of February. Flower shops and gift shops are not allowed to sell roses or heart-shaped novelties either. Stores that refuse to abide by this law can be closed down, and students seen wearing something with a hint of red on are usually sent home from school to change clothes. This custom is in place to discourage dating and relationships outside of marriage.

The Great Angel Of Friendship and Financial Helper Is Angel Umabel