By KonkeNews (self meida writer) | 2 months

Could this Giant discovery give a clue as to why god destroyed the earth. 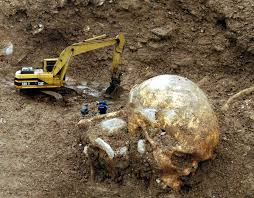 The fact that giants roamed the earth's surface is a well-known fact, as evidenced by numerous literary accounts. The presence of giants that roamed the globe throughout biblical times is abundantly documented in the Bible's wonderful book.

The Nephilims were their most well-known form. Goliath, a well-known giant, was slain by David using a catapult. An archaeological find in Israel once shown that a giant with a stone sling on his head could actually prove that.

What was the mission of these giants on earth. This is what the bible says;

“6 When human beings began to increase in number on the earth and daughters were born to them, 2 the sons of God saw that the daughters of humans were beautiful, and they married any of them they chose. 3 Then the Lord said, “My Spirit will not contend with[a] humans forever, for they are mortal[b]; their days will be a hundred and twenty years.”

4 The Nephilim were on the earth in those days—and also afterward—when the sons of God went to the daughters of humans and had children by them. They were the heroes of old, men of renown.

5 The Lord saw how great the wickedness of the human race had become on the earth, and that every inclination of the thoughts of the human heart was only evil all the time. 6 The Lord regretted that he had made human beings on the earth, and his heart was deeply troubled. 7 So the Lord said, “I will wipe from the face of the earth the human race I have created—and with them the animals, the birds and the creatures that move along the ground—for I regret that I have made them.”

In ancient times, these people rose up great and conquered and built an empire. They were known to consume anything that stood in their way, seize things by force, and devour herbs, beasts, and men. Their immorality was too much for other men to bear, so they followed suit.

During Noah's day, this mentality almost became the norm across the entire planet, until God decided to destroy the Earth with the great flood.

Could the world tallest man be a Nephilim when his bones is discovered many years after his work?

How true is this. Your comments are highly welcomed

Simply beautiful; check out beautiful cornrow hairstyles you can rock to any occasion and stand out