By IamUpperWestKing1 (self meida writer) | 1 months 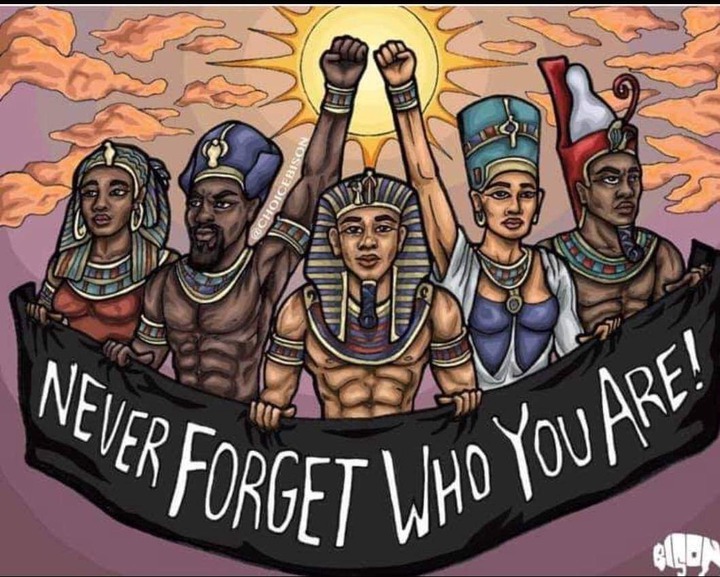 Tell this to our African children and wake them up. Our mainstream schools will not teach them this. But it is your duty, to always tell them this. Tell them that our History was not written in books. Our History was written on stones. Tell them that every person or activity that occured in Egypt, was recorded in Egyptian temples and stones. They said Abraham, Moses and Jesus all visited Egypt but there is no record of their visitation in Egypt till today. Tell our children that the first Non Africans who were herders that came to Egypt in 1675 B.C only ruled a particular place in Egypt for 100 years but were later chased out with the help of African Sudanese warriors.

Tell our children that the body of the Pharaoh who existed in the time of Moses was discovered by archeologists but we have still not seen even the bones of Moses. Most importantly, tell our children that there is no record of a Jew named Joseph interpreting dreams for an Egyptian Pharaoh or trying to be seduced by the wife of an Egyptian Pharaoh or becoming a Governor in Egypt. Tell them that the Jews came to Egypt to study in our temples for 15 to 20 years around 2000 B.C but they lied that they were enslaved. Tell our children that the Old Testament was copied from Egyptian myths and History by the Jews. Tell them that the pyramids were not built by slaves but were built by Africans who willingly built it for the Pharaohs and example of such builder was an African named Imhotep.

Tell them that Imhotep was not only an engineer but the father of medicine and not Hippocrates. Tell them that around 1550 B.C, the first Queen Of Egypt named Hatshepsut wrote a Medical Paper titled the process of birth control down to 1700 B.C which means Africans such as Imhotep, has already started the Science of medicine and pregnancy control. Tell them that even Herodotus who was a Greek Historian and the father of History, visited Egypt in 450 B.C and openly declared that the original Egyptians are black Africans. Tell them that Africans in Egypt started the school of Mathematics, Astronomy, Philosophy and Medicine even before the existence of Europe.

Tell them that from 476 AD to 800 AD, most of those who call themselves Europeans were illiterates and poor in hygiene. Tell them that there was no Greek that existed until Homer (The first European and Greek writer), wrote his Odyssey and Iliad in 833 B.C. Tell them that even Homer who was the first Greek writer said that the God Zeus and Apollo came from Ethiopia Africa. Tell them that when their black African Ancestors conquered the Europeans over 800 years ago from 711 A.D to 1492, we never miseducated or change their language. We taught and gave them knowledge and we provided universities for them. But when they came to conquer us, they miseducated us and destroyed our culture from 1480 to 1900s.

Tell them that our black Ancestors built the University of Salamanca in Spain when they ruled some places in Europe such as Spain from 711 A.D to 1492. Tell them that it was their black ancestors in Africa who civilized the Greeks and gave them all the knowledge they have today. Tell them that Islam is a disease in Africa and they should give it back to the Arabs. Tell them that in the 7th Century on December 639 A.D, 4000 Muslims from the middle east led by Amir Aben Alas, invaded Egypt, conquered it and started enslaving their African Ancestors. Tell them that over 10 million of their African Ancestors died in the hands of Muslim Slave traders for 700 years. Tell them that around 614 A.D, the Islamic Arab slave traders gave Chinese Emperors in China thousands of African slave women as gifts to be used as sex object. An African slave woman who became pregnant for any Emperor, was killed with her baby because the Emperor sees African children from African women as curse.

Pass this message to our African Children in Africa and Diaspora.

Content created and supplied by: IamUpperWestKing1 (via Opera News )

Mr. Asiedu Nketia and the NDC have addressed the media on Chief Justice's petition to the GLC.