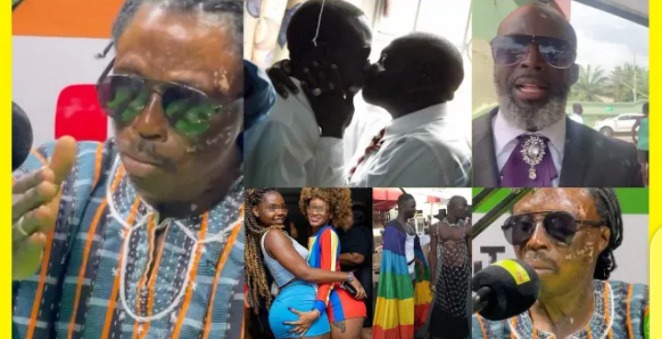 What most people always say about pastors of today has finally come out to be true. To be precise, people now see pastors as demons by their own other than being the intermediate to Christ. Why are the people saying this? People have over time rumoured that, most Ghanaian pastors are not from God and that, operate under the Dark World. They other than seeking powers from the almighty God lure themselves to attend to chief priest for their powers after which they come out to make claims with the name of God.

One of Ghana's controversial Chief Priest , Kwaku Bonsam speaking on Okay FM has finally confirmed the rumours about most pastors. This was confirmed in his statement, saying, "it never wrong for a pastor to seek for super natural power from a chief priest".

According to the pastor, it never a sin and that shouldn't be recognized as a sin when a pastors seeks for supernatural powers from a chief priest.

The priest explaining his point stated that, he never forces any pastor to come to his basement to seek for supernatural powers but anytime they hit at his doors, he responds to their quest. According to him, he has blessed a lot pastors with supernatural powers which till now, they are still operating with it.

When he was quizzed why he does that meanwhile he knows that, it encourages the pastors to continue deceiving people, all that he could say was, Let all grow together, the harvesting time will tell the good one.

The Chief Priest further revealed that, he is not only what we see outside in him but actually have something he does which no one has gotten the idea. The priest touching on that revealed that, he is more dedicated to the God almighty than we Ghanaians think of him. According to him, he never joke with the Bible as well as prayers. He always have his quiet time early every morning, pray to the almighty and read the Bible day in and day out as a good Christian will do. He further stated that, he is a proud Member of the Seventh Day Adventist Church and always service every Saturday.

The video below tells the whole story

15 Years After Angelina Jolie Adopted A Homeless African Child, See How Beautiful She Is Now