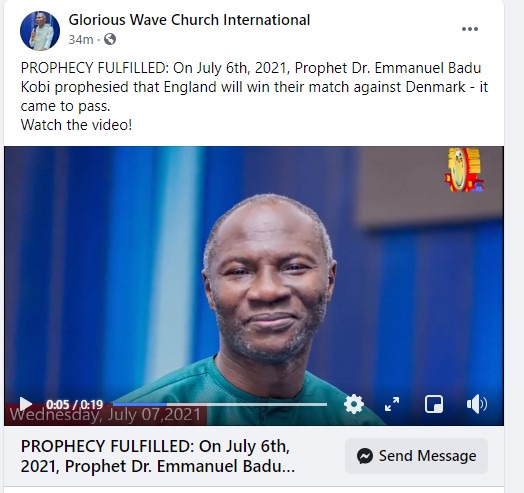 The Founder and Leader of Glorious Wave Church International, Prophet Badu Kobi's prophecy about the match between England and Denmark is highly questionable. The tape as published by the Prophet on the church's official Facebook page raises some grave contradiction about the time such prophecy was made.

It is advertised on the page today that prophecy about England winning the match against Denmark in the semi-finals of the UEFA EURO 2020 tournament, was issued on July 6, 2021, a day before the game. However, a caption placed at the bottom left corner of a video published by the church said the prophecy was on July 7, 2021, thus the day the game was played.

More to this pack of contradiction which suggests the entire prophecy could be 'cooked', is the fact that Prophet Badu Kobi is heard loud and clear asking when the match is to be played, and one of his junior pastors responding that the game was live with a score line of a goal draw. In a response to it, the Prophet predicted that England shall win the game.

The big question then is; "when and where exactly was this prophecy issued?".

For the Prophet to claim he prophesied the victory of England amidst these inconsistencies in dates, makes one doubt its credibility. Even if they argue it was a typographical error during the editing and production of the video, and its subsequent publication on Facebook, there is no record of an event where the prophet said this.

To clear any doubt, an original tape need to be produced, and this should be the usual scene as captured in a series of ministrations and podcasts Prophet Badu Kobi delivers.

It is interesting but it appears to be a smart 'joke' being pulled on Ghanaians. Just analyze the video that was shared on the page, below.

Ladies If You Visit Your Boyfriend & Found Out That This Is His Room, Will You Continue Dating Him?

Obinim Again?– Here Is Why He Is Trending Once Again.