VIDEO: ''T. B Joshua You're Dead And You Will Suffer Wherever You Are ''~ Man Rain Curses.

By AccraBlogger (self meida writer) | 10 days

T. B Joshua, the late man of God, has been cursed by an anonymous guy who has displayed his face in public. T. B Joshua, according to the man, sold cooking oil and common water for people at high prices when he was living. He claims that he is a living witness to the late prophet's deceptions.

" T. B Joshua, you're dead," he began his story. After killing our people, after destroying the lives of thousands of sick young people, after killing them with the "healing water" and "oil" you were selling to our sick people,

"Why has the Pope, who has more than 500 million people under him for a day, never prophesied to anyone or sold any water or oil to any sick person and the same people who introduced Christianity to the world of which you represented them in Nigeria are busily building hospitals even for their animals?" T. B. Joshua, wherever you are now, you will suffer." He went on to say that the man of God ruined a lot of souls, something he witnessed firsthand. 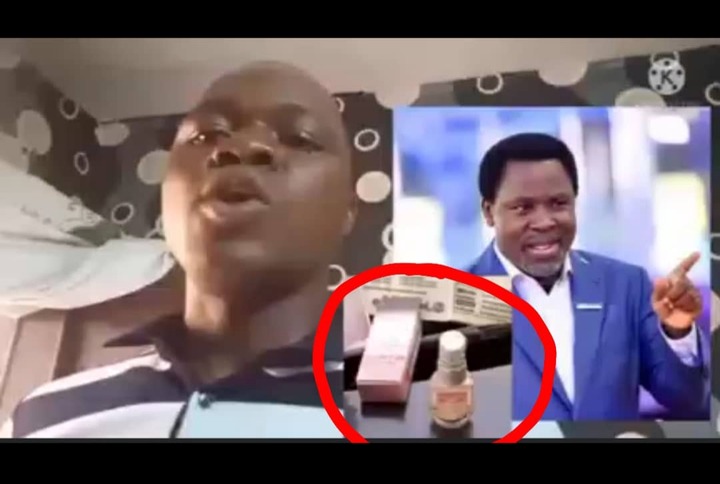 "I know folks who came to you with liver cancer and kidney failure, and you sold them water." They hang out at your hotel, which you erected to defraud our people."

The young man urged African to wake up in order to avoid being slain by so-called "men of God."

People should provide crippled people they know in their community, which T. B Joshua prayed for and was able to walk again, he challenged. He went on to say that whomever succeeds will be rewarded with a million Naira and a plot of land.

Many popular men of God, the young man concluded, are not genuinely working for God but for themselves, and that people should be wary of them.