Apostle Sam Korankye Ankrah has become a household name in Ghana, as one of the most respected members of clergy. Whereas many refer to him as the Apostle General, very little know how he came to this place of greatness and impact, all by the special grace of God.

Well, here is his story. Early 1990's were the time, when travelling to Europe for greener pastures was the order of the day and very few had the rare chance to do so and thankfully, then Sam Korankye had travelled to Holland also. But something happened while there on the 19th June 1991, as Apostle Sam Korankye Ankrah had a destiny-changing encounter, an incident which will be the catalyst for birthing his ministry. 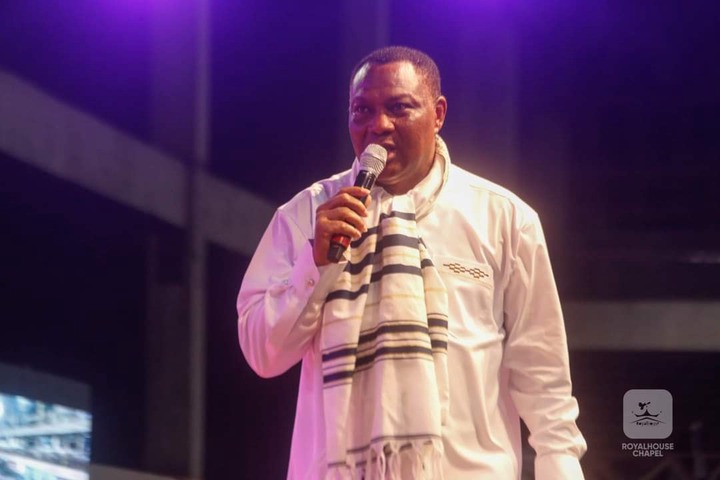 After having travelled to Holland to seek greener pastures to cater for his family. He was asleep in a room on that fateful day, when at midnight on one fateful day; he heard strange knocks on his door, woke up to see who it was, only to realizing that, there was no one. He initially had haboured the thought that, it was his Indian landlord, who might have been knocking.

This knocking persisted for a while until he sensed rather, this might not be ordinary, but a supernatural encounter, and this was affirmed by this supernatural breeze and presence, that suddenly filled his room, then an audible and authoritative voice forcefully instructed him to pray and knowing it was the Lord’s command to him, he prayed for three (3) solid hours amidst tears, non stop.

Apparently, he had initially heard God rather subtly asking him to leave back for Ghana but "I had disobeyed the Lord when He commanded me to return to Ghana to start a ministry for Him. I took Gods grace and mercies for granted by rejecting the call. However, after several hours of prayer this day, God had mercy on me and gave me another chance. He instructed me to reach for my Bible, which immediately flipped to 1 Timothy 3:1," He shared.

In this encounter, the ministry which will birth the Royalhouse Chapel International was revealed to him. "God ordained me a “bishop” that morning to have oversight over His church, which will be established through me. As I meditated on this I asked, “What good can come out of being a bishop?” He responded, “JUST TRUST ME”. He covenanted with me and this has been the beginning of His church."

He quickly returned home, amidst concerns by some that, he couldn't live in Europe and make wealth for himself, but he knew that, he was heeding to God's call upon his life. Royalhouse Chapel International was then founded in late 1992, first as International Bible Worship Centre (IBWC), which also was a product of a Bible study and prayer fellowship that Apostle Sam Korankye had started few months earlier upon his return called, the Showers of Blessings Fellowship.

Now transitioning from a non-denominational prayer meeting into a church, they held their heir first Sunday service, at the Ghana Education Service (GES) Model Nursery School at North Ridge and just twelve adults and five children were present, out of the over 70people, who used to come for prayers at his fellowship meetings.

Despite the initially challenges, he was bent on seeing God's word to him come to pass. Soon, they had to change venues and saw their numbers gradually increasing also and hence, from GES Model Nursery School, the church moved to Agricultural Development Bank (ADB) Canteen and then to “Blackmore and Sons” warehouse at Kokomlemle, Accra.

It was in March 1999, that the Apostle General changed the name of the church to Royalhouse Chapel International to give the church a global focus and over these years, the membership of the church has grown from twelve to tens of thousands, as the church saw major church expansion as the church also sent out pastors to plant branches in some localities around Ghana. The church has also spread to other nations with hundreds of local assemblies and several other international missions.

RoyalHouse's historic migration to their present place of worship was made on the 4th of November 2000. After an all-night at “Blackmore and Sons” warehouse, the church went on a prayer march to “Ahenfie”, at 4 am and this was literally their crossing over from Egypt to the Promised Land. Ahenfie is thus considered by all members of Royalhouse Chapel as a land of prophecy and promise.

After many years of laying the foundation for the church's biggest auditorium and offices, the project stalled, but especially since last year, the project has received much attention and fast forward to today, the Oil Dome (on the same Ahenfie land), is seeing finishing touches to its interior décor and it is expected to be one of the finest edifices to God’s honour with a five – storey office complex and will soon be officially commissioned.

The structure also boasts of all round glass installations, that makes it the nation's most transparent structure, as even he roofing material is also transparent. Due to Covid-19 restrictions, the structure has not seen its massive usage this year so far, as these pictures are from pre-covid times. 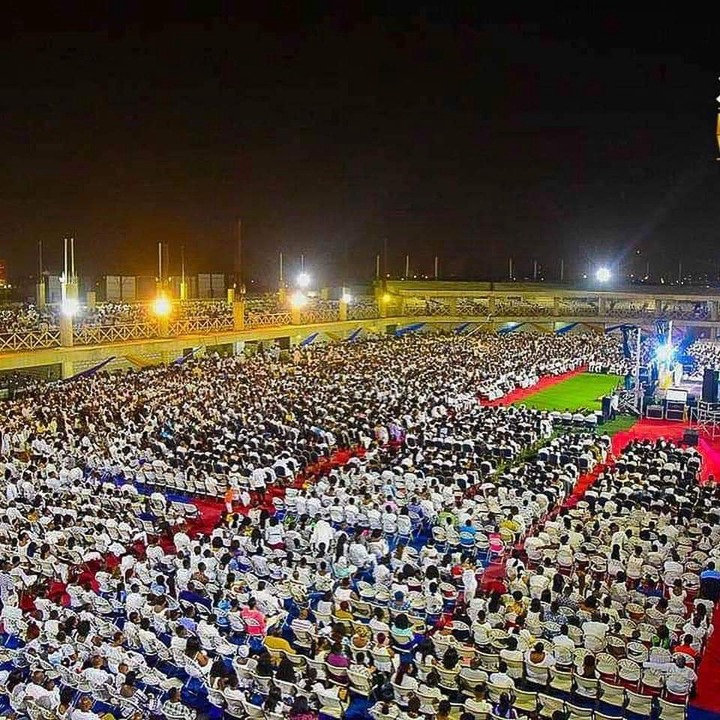 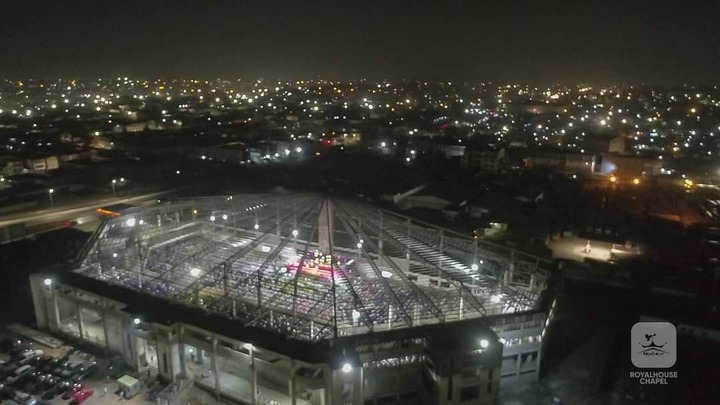 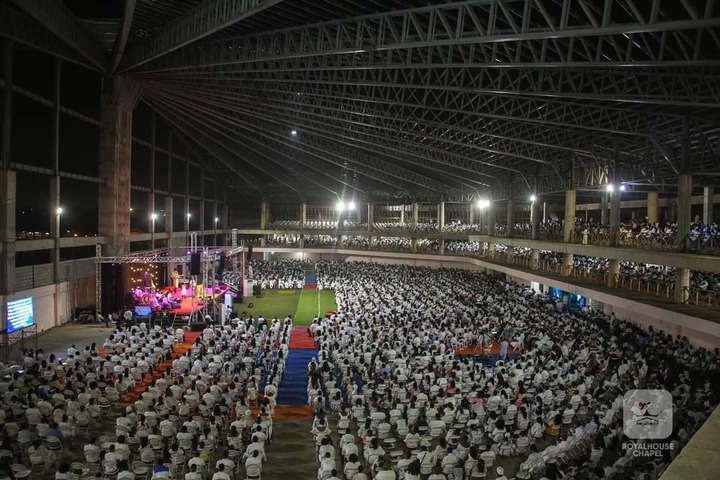 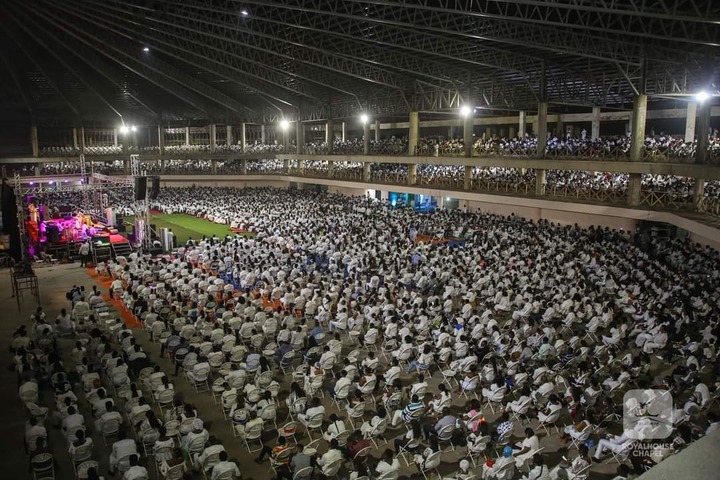