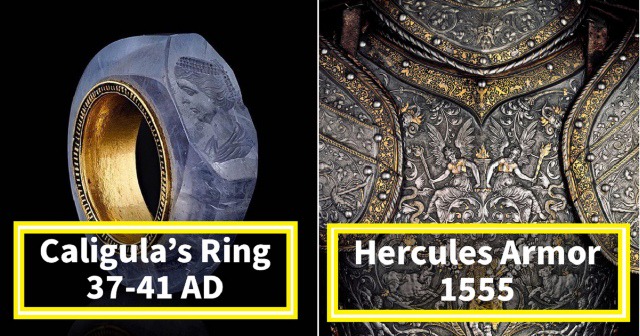 We often believe that over the years, human race has made significant leap inn the field of science and technology. But when we look at the thigs of the past, our ancestors seemed much more superior than us in technology. Look at these 10 things that were created long time ago and are yet as surprising as it can get for us!

Look at the detailing at this temple in Egypt which is at least 2000 years old. The detailing in the work here is absolutely magnificent! Along with Egypt, there are so many more temples in India as old and as pretty as this one! How did people back then got skills for such fine detailing?

These shoes were found in Altai mountains and research proves that this pair is at least 2400 years old. Do you see how beautiful it is? Look at that mirror work? When did we stop making shoes like these?

An Astronomical Clock In Prague

This clock, they say, was put up there in 1410 and is yet working fine! The clock is fully mechanized, showing the relative positions of the Sun, Moon, Zodiac constellations and, sometimes, other planets. I don't think they ever made anything like this again!

This is possibly the oldest "Beware Of Dog" sign you will ever see in our world. It is at least 2000 years old and was found in a Roman house!

This is yet another super surprising thing that depicts the real strength of things made back in time! The tomb of the ancient Egyptian pharaoh Tutankhamun, also known as King Tut, was discovered in 1922. This cord that sealed it was broken 3,245 years after it was first tied.

This is a 3rd century Roman villa floor. Do you see how pretty it looks?

This is a 2500 year old Sword that belonged to Goujian, King Of Yue. When it was found, it was almost untarnished! What metal did they use?

Hercules Armor was made in the middle of the 16th century for Archduke (later the Holy Emperor) Maximilian II. It was made in France and the detailing in this Armor is magnificent! It was made back in 1555!

This gorgeous looking ring may have belonged to Caligula. It is 2000 years old. This sky-blue ring is a hololith, meaning it is made from a single piece of stone. It looks absolutely stunning, doesn't it?

You are looking at a 3,400-Year-Old artist's palette found in Egypt. This is the exact condition in which it was found!