By Exponent (self meida writer) | 9 days

1. Uranus is the coldest planet in the Solar System: 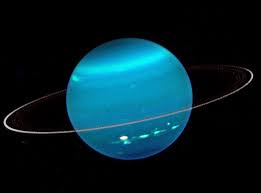 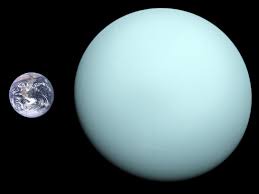 2. Uranus orbits the Sun on its side:

All of the planets in the Solar System rotate on their axis, with a tilt that’s similar to the Sun. In many cases, planet’s have an axial tilt, where one of their poles will be inclined slightly towards the Sun. For example, the axis of the Earth’s rotation is tilted 23.5-degrees away from the Sun’s plane. Mars is similar, with a tilt of about 24 degrees, which results in seasonal changes on both planets.But the axial tilt of Uranus is a staggering 99 degrees! In other words, the planet is rotating on its side. All the planets look a bit like spinning top as they go around the Sun, but Uranus looks more like a ball rolling in a circular pattern. And this leads to another strange fact about Uranus.

A sidereal day on Uranus (that is, the time it takes for the planet to complete a single oration on its axis) is only about 17 hours long. But the tilt of Uranus is so pronounced that one pole or the other is usually pointed towards the Sun. This means that a day at the north pole of Uranus lasts half of a Uranian year – 84 Earth years.So, if you could stand on the north pole of Uranus, you would see the Sun rise in the sky and circle around for 42 years. By the end of this long, drawn-out “summer”, the Sun would finally dip down below the horizon. This would be followed by 42 years of darkness, otherwise known as a single “winter” season on Uranus.

4. Uranus is the second-least dense planet:

The least dense planet in the Solar System is Saturn. In fact, with a mean density of 0.687 g/cm3, Saturn’s body is actually less dense than water (1 g/cm³). This means that the planet would float in a pool, provided it were roughly 60,000 km wide. With a mean density of 1.27 g/cm3, Uranus has the second-lowest density of any planet in the Solar System.This low density has an interesting side effect. Despite the fact that Uranus is 14.5 times as massive as the Earth, its significantly lower density means that you would only experience about 89% the force of gravity, assuming you could stand on Uranus’ cloud tops.

When it comes to ring systems, Saturn’s are the most famous. In addition to be colorful and far-reaching, they are also highly visible. One could spot them using nothing more than a backyard telescope. But in truth, all the gas and ice giants have their own ring systems, and Uranus’ is the second most dramatic set of rings in the Solar System.However, these rings are composed of extremely dark particles which vary in size from micrometers to a fraction of a meter – hence why they are not nearly as discernible as Saturn’s. Thirteen distinct rings are presently known, the brightest being the epsilon ring. And with the exception of two very narrow ones, these rings usually measure a few kilometers in width.The rings are probably quite young, and are not believed to have formed with Uranus. The matter in the rings may once have been part of a moon (or moons) that was shattered by high-speed impacts. From numerous pieces of debris that formed as a result of those impacts, only a few particles survived, in stable zones corresponding to the locations of the present rings.

6. The atmosphere of Uranus contains “ices”:

Compared to Jupiter and Uranus, Neptune seems quite normal. When one looks at the swirling clouds and eddies that stream across the surface of Jupiter and Saturn, the violent and turbulent nature of their atmospheres is made clear. Uranus, by contrast, appears as a light and uniform blue. But thanks to improved instruments that can examine planets through other wavelengths (i.e. infrared) and the flyby conducted by the Voyager 2spacecraft, some significant things become apparent.For example, Uranus has powerful zonal winds within its atmosphere that can reach up to 250 m/s, and can generate anticyclonic storms like Jupiter’s great red spot. It also has cloud patterns that differ between hemispheres, some of which last for mere hours while others can persist for years or decades.But perhaps most interesting is the presence of certain “ices” in Uranus’ atmosphere. The third-most-abundant component of Uranus’s atmosphere is methane (CH), which is what accounts for Uranus’ aquamarine color. There are also trace amounts of other hydrocarbons, such as ethane, acetylene, methylacetylene, and diacetelyne, all of which are believed to be the result of methane interacting with solar ultraviolent radiation.And last, there are confirmed traces of water, ammonia, carbon dioxide, carbon monoxide, and hydrogen sulfide within the layers of Uranus’ atmosphere. And due to the extreme cold, they are suspended in an icy state.

7. Uranus was the earliest planet discovered in modern age.

Most of the planets are visible to the unaided eye, and were known in ancient times. Uranus was the first planet discovered after the invention of the telescope. It was first recorded in 1690 by John Flamsteed, who thought it was a star in the constellation Tauri. But it wasn’t until sir Williams made his observations in 1781 that astronomers finally realized it was a planet.Herschel originally wanted to call Uranus “George’s Star” after King George III of England. However, this was not a popular name outside of England. Eventually, the astronomical community officially settled on the name Uranus – the Latinized version of the Greek god of the sky, Ouranos – and the name stuck.

8. You can see Uranus with the unaided eye:

You might be surprised to know that you can see Uranus without a telescope. At magnitude 5.3, Uranus is just within the brightness scale that a human eye can perceive. Unfortunately, you’d need to make sure that the night sky was extremely dark and would have to know exactly where to look.Because of this, Uranus has actually been spotted many times in the past by ancient and pre-modern astronomers. But given its low luminosity compared to the other planets, it was generally mistaken for a star. In fact, when Flamsteed first observed it, he cataloged it as 34 Tauri, believing it to be a star in the Taurus constellation.

9. Uranus has only been visited once:

Only one spacecraft in the history of spaceflight has ever made a close approach to Uranus. NASA’s Voyager 2 conducted its closest approach to Uranus on January 24th, 1986, passing within 81,000 km of the cloud tops of Uranus. It took thousands of photographs of the gas/ice giant and its moons before speeding off towards its next target: Neptune.No other spacecraft have ever been sent towards Uranus, and there are currently no plans to send any more.However, this never came to fruition, as it would have taken about twenty years for Cassini to get to the Uranian system after departing Saturn. While several proposals are currently under consideration, none have been confirmed yet.